The Apsaras of Arka Part XIII 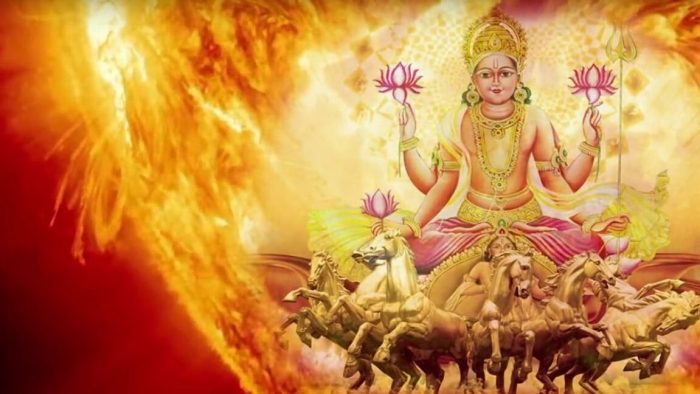 The Celestial nymphs of Devendra remained an integral aspect of the various plots he created tactfully to safeguard his insecurities. The Apsaras according to the Vayu Purana were created by Brahma through his mental creative attributes and were also addressed as Manasa Kanyas.

Along with  Yaksas, Pisachas, and Gandharvas, these celestial nymphs of Brahma were the most alluring. The Vayu Purana further states that these Apsaras were created from Agni and Arista for the cause of joy and goodwill.

Rishi Parashar, in the Bhagavata Purana, indicates that in a year, between the extreme northern and southern points of the Earth, Surya has to traverse at one hundred and eighty degrees, ascending and descending.

Rishi Parashar explains that Shri Vishnu manifests his influence of time as the Sun-god and travels in each of the twelve months, to regulate planetary motion within the universe. In each month of the year, a different Aditya shines.

Each Month is presided over by an exclusive Divine Aditya, Rishi, Apsara, Gandharva, Yaksa, Naga, and Raksasa, and His chariot is pulled by seven horses. Every new month is presided by a set of new Divine’s.

Rishi Parashar further elaborates and praises the celestial creatures dedicated to the service of the twelve Adityas in each season – The Rishi does the rituals, the Gandharva sings, and the Apsara dances. The Rakshasa is present at the steps of the chariot, the Naga binds the steeds and the Yaksha trims the reins.

A gathering of sixty thousand Brahmans – The Balakhilyas surround the magnificent chariot of Arka and utter hymns from the Vedas in His praise. The set of Divine associates attached to the Ratha of Surya are regarded as the negotiators and cause in the seasonal distribution of cold, heat, and rain.

Throughout the twelve months, the Sun God travels in all directions with his associates, disseminating among the populace of his creation the purity of perception towards existence.

Rishi Parashar in his narration gives an account of each Aditya and the set of associates who accompany Him. The description by Rishi Parashar is described in the Bhāgavata Purāṇa, Canto 12, Chapter 11- Shloka 33 to 44.

Rishi Parashar starts his narration by introducing Dhata as the Sun God associated with the month of Madhu and Apsara kṛtasthalī as his celestial nymph.

Meaning: Dhātā as the sun-god, Kṛtasthalī as the Apsarā, Heti as the Rākṣasa, Vāsuki as the Nāga, Rathakṛt as the Yakṣa, Pulastya as the sage, and Tumburu as the Gandharva rule the month of Madhu.

Thereafter, Rishi Parashar introduces the next Aditya- Aryama who has Puñjikasthalī as Apsara.

Meaning: Aryamā as the Sun God, Pulaha as the sage, Athaujā as the Yakṣa, Praheti as the Rākṣasa, Puñjikasthalī as the Apsarā, Nārada as the Gandharva, and Kacchanīra as the Nāga rule the month of Mādhava.

Rishi Parashar, established the next month as Sukra with the Aditya recognized by the name Mitro/ Mitra who has Menaka as Apsara.

The next month is described as Suchi with Varuna as Aditya, who has Rambha as Apsara.

The next Aditya is Indra, He rules the month of Nabha in the company of Apsara Pramlocha.

Meaning: Indra as the Sun God, Viśvāvasu as the Gandharva, Śrotā as the Yakṣa, Elāpatra as the Nāga, Aṅgirā as the sage, Pramlocā as the Apsarā, and Varya as the Rākṣasa rule the month of Nabhas.

Rishi Parashar describes the next manifestation of Aditya as Vivasvān, He rules the month of Nabhasya in the company of Apsara Anumlocā.

Thereafter follows the month of Tapas, Pusa is the Aditya in the company of Ghṛtācī as the Apsarā.

Meaning: Pūṣā as the Sun God, Dhanañjaya as the Nāga, Vāta as the Rākṣasa, Suṣeṇa as the Gandharva, Suruci as the Yakṣa, Ghṛtācī as the Apsarā, and Gautama as the sage rule the month of Tapas.

In the company of Apsara Senajit, Prajanya the Aditya rules the month of Tapasya.

Urvaśī, the Apsara dances throughout the month of Sahas when Athaṁśu as the Sun God rules the skies.

Next, it is Bhaga as the Aditya along with Pūrvacitti as the Apsarā rule the month of Puṣya.

Tvaṣṭā the Sun- God is in the companionship of Apsara Tillotamma in the month of Isa.

Rishi Parashar ends his narration on the twelve Adityas and their associated by introducing the month of Urja, where the Sun God Vishnu is in the company of Apsara Rambha.

The Bhāgavata Purāṇa elaborates Shri Arka as the manifestation of Shri Hari himself. He is the ever nurturing and omnipresent Divine who scatters his rays of opulence. The Sun is Sarva Sakshi Bhutam- A steady bystander to every event on the Earth. The Sun God is visibly seen by the eyes while his associates remain masked in the halo of His rays, celebrating the changes in life.

The Apsaras, resembling the stretched rays of the sun dance and dazzle along with the twelve Adityas. These Apsaras of Arka confirm that they have been visiting the Earth since time bygone and will continue their journey to Infinity, confirming their eternal affection for the Earthly beings.