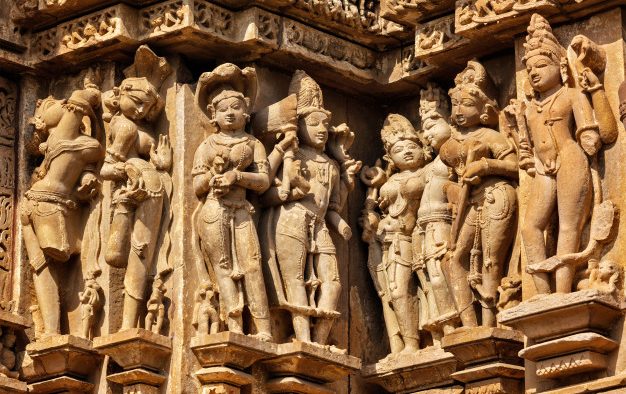 These celestial beauties have been smeared by the essence of Bharat Muni’s Nava Rasas as discussed in the Natyasastra. With their captivating charisma, the Apsaras have been capable of arousing emotions through their persuasive gestures and movements.

These celestial maidens of the Heaven, crafted in stones, dyed with hue, printed in Puranic texts and literature elaborately depict the most pleasurable aspect of the Shringara Rasa is Kama – sensual desire. They showcase with their artistry the attainment of ultimate sensory pleasure and not just the gratification of lust.

Agni-Purana narrates the ideal beauty traits of women. There are many scriptures bursting with the beauty narrations of Krishna and the Gopikas who played love games with him. As physical appearance was an essential Vedic and Puranic ingredient, Brahma created Apsaras with the most desirable attributes.

According to the Hindu aphorism, the four goals of human life include- Dharma Artha, Kama, subsequently leading to the attainment of Moksha. The Hindu scriptures view the Kama is a customary activity and also sacred duty. The Kama establishes the unification of Purusha with Prakriti represented by the Divine union of Shiva and Shakti. This union of matter and energy leads to the creation of the world, existence of life, and multiplication of its creatures. 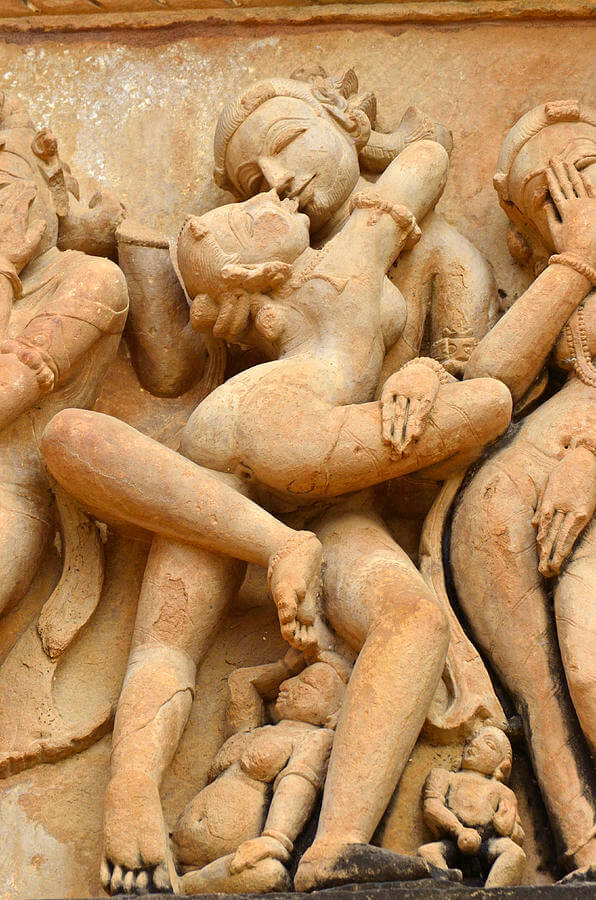 Vatsayana wrote the grammar of Kama – The Kamasutra where he scientifically elaborated on the rituals and techniques of attaining the Kama. In the prologue of the Kamasutra, Vatsayana mentions Prajapati – Lord of Beings, who pronounced ten lakh chapters for observing Dharma, Artha, and the Kama.

Dharma was discussed by Manu, Artha by Brihaspati, and the Kama by Shiva’s attendant Nandi. Apsaras translated the aspect of Kama as described in the Kamasutra to be viewed and learned and subsequently be practiced in order to attain Moksha-Salvation.

The Puranas discuss a set of fourteen Amorous Apsaras, created for the beautification of Indralok. The Surayanas of Indra Sabha are bestowed with beautiful bodies and youth, and these celestial maidens are known by names such as Dhanurupa, Mahabhaga, and Tilottama.

Lord Indra used these beautiful feminine armaments to safeguard his position that would often be under threat by the steadfast penitents of Rishis and Munis. Visvamitra was fascinated by the gorgeousness of Apsara Menaka, he engaged in an amorous relationship with her and then fathered Shakuntala through her.

Meaning – There the most brilliant son of Kusika, Viswamitra saw Menaka whose beauty was incomparable. She looked like lightning in the clouds.

Meaning – On seeing her, Viswamitra came under the influence of the God of love and fell in love with her. He said, O Apsara! Welcome to my hermitage stay here. I am infatuated with you: Oblige me.

Meaning – O Delight of the Raghus! A sense of indignation filled the mind of the ascetic. All this is the conspiracy of the Gods to deprive me of my great austerities’, he thought.

Meaning – Night and day deluded by lust I have wasted ten years. A hindrance has been posed to my dedicated Tapas.
–   Valmiki Ramayana

Similarly Sardvanta, upon seeing partially clad Apsara Janapadi,  got engrossed in her love, and through his seed, he fathered Kripa and Kripi. Guru Drona the teacher of the Pandavas and the Kauravas came to the world when his father Bharadwaja spurted his seed in a pitcher upon seeing the unclothed Apsara Ghritachi.

Sage Vyasa also begot a son Suka by voluntarily discharging his seed, on seeing Apsara Ghritachi. Mankanaka, upon seeing a glorious celestial Apsara bathing bare, spurted semen into the water and then the Sapta Rishis were born. Likewise, sage Vibhandak was charmed by Apsara Urvashi and Rishyasringa was born.

King Drupada, the sages Agasthya and Vasishta were also born from the involuntary release of seed from Varuna and Mitra upon seeing Urvashi rise out of the Yajna. Their semen falls into a mud pitcher, and the fetus of Agastya grows along with his twin sage Vashistha in the Kumbha- the Urn.

In almost all the above instances Lord Indra had used the charming Apsaras and put them at task to spoil the penance of the sages and thus remaining secured as the Lord of Heaven.
The Apsaras have been creatively portrayed erotically in the Shringara rasa. 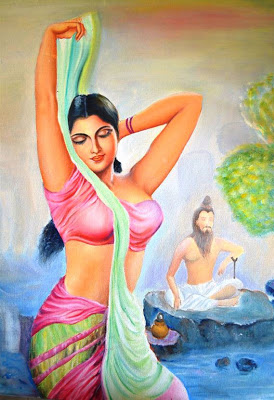 This Rasa of the Natya Shastra shows Aayoga– anticipation, Viprayoga– unpleasant separation after a quarrel or a broken promise to meet. Sambhoga – conjugal pleasure. The state of Aayoga is mostly depicted in temple sculpture, the Apsara looks forward to meeting her love interest and it is conveyed through her gaze and body posture.

In the state of Viprayoga that is mostly seen in written and pictorial illustrations, the Apsara is described as a lonesome and saddened soul after a bicker with her lover. Sambhoga depicts the Apsara engaged in conjugal intimacy with her beloved, thus enjoying the Kama.

Sambhoga is mostly depicted in the temples. Most famously magnificent depictions of Kama can be found in the ancient Hindu temples of Khajuraho, Sun temple Konark, Virupaksha, Modhera Sun temple, Belur, etc.

The magnificent Hindu temples substantiate architectural brilliance and the depiction of the Kama in collaboration with the alluring Apsaras, Kichakas, Nayikas, Madanikas affianced in numerous scenes of Shringara Rasa and passionate indulgence.

The scriptures have captured these passionate damsels as a medium of arousing love.  On the whole, the Apsaras are beautifully crafted celestial beauties, meticulously detailing the various syntaxes of eroticism, acting as Divine catalysts in the Kama.