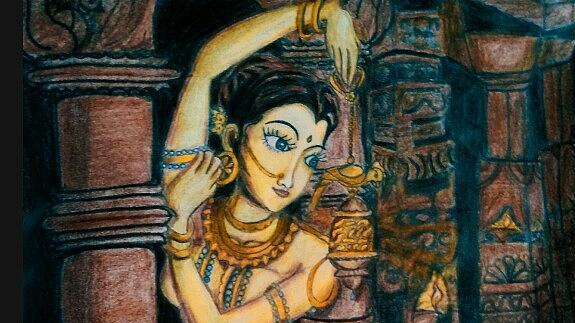 Ancient Hindu temples and scriptures hold the foundation for several classical dance forms performed in India. The dancing postures adorning the temple gateways, walls, torans, and passages and almost everywhere around, encompass an elaborate depiction of diverse moods and emotions through feminine sculptures in dancing postures. These feminine figures portray superlative beauty, appropriate physical symmetry, and the most graceful stance. The sensual charm of these women in stones is enigmatic and engaging. They are carved to utmost gorgeousness with youthful and nimble bodies; bringing out charisma and erotic sensuality. The meticulous elaboration of their drapery, hair styling, and ornamentation fills them with overflowing vivacious lure as if they were all ready to dance.

The starting point of almost all major Indian classical dance forms is rooted in the “Natyasastra”, a dedicated manuscript on dance, drama ethics, and gesticulation written by Bharat Muni. As per mythological legend – Shiva taught the art of dance and recital to Nandikeshvara. Later Nandikeshvara authored ‘Abhinaya Darpana’ – “The Mirror of Gesture”. Nataraja taught Nandikeshvara ‘Tandava’- The vigorous dance movements as well as the supporting gestures to depict various explosive emotions to elaborate acting. The book remains an important reference text for Indian classical music and dance forms. 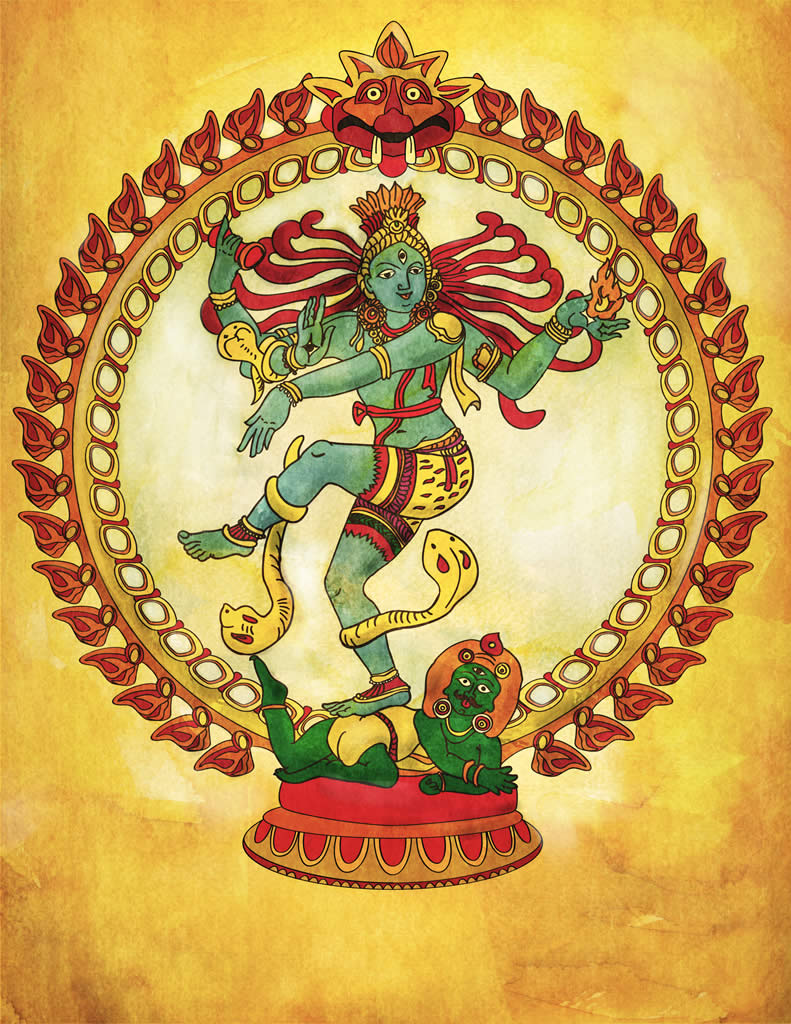 Describing the process of rasa in dance, Nandikeshvara describes-

The above words on Nritya Rasa indicate that the eyes of the dancer should move to where the hands go. The glance should depict the emotions with a dedicated heart. The heart should be emoted through touching gestures of the face and the body. It is these facial and bodily expressions that convey the perfect flavor of sentiments and passion. An assessment of any Indian classical dance form imbibes the above lines to the core.

Nandikeshvara passed this knowledge to Brahma, who in turn passed it to Bharat Muni. Thereafter, Bharat Muni, along with his hundred sons, performed three types of theatrical events spoken, extravagant, and energetic. Brahma also asked Bharata Muni to incorporate soft movements in the form of lasya or grace into these presentations. The additions of graceful lasya movements incorporated erotic and passionate subjects. To educate his hundred sons in lasya and to depict amorous and delicate emotions he requested Brahma to introduce females. Brahma addressed his request by creating Apsaras and endowed them with the best dancing and singing capabilities. The Apsaras were instrumental in adding the various Bhavas and Rasas to the dance recitals. Thereafter, Bharat Muni wrote the Natyasastra. Thus, according to the Natyasastra, Brahma is the source of Natya -Dance-theatre, Vishnu is the source of Vritti. The essential rudiments of drama and Nataraja is the source of Nritya -Dance. 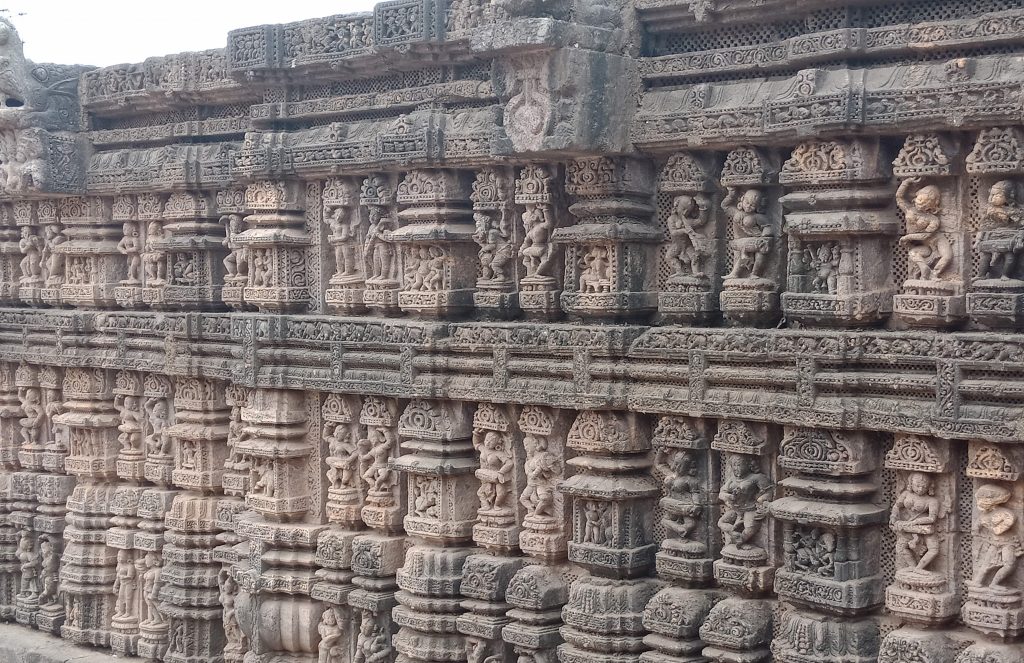 Almost all the Important Apsaras in Puranas were the mind children of Brahma. Apsara Mohini was an exception. Vishnu reincarnated himself as Apsara Mohini and appeared during the Samudra Manthan. Apsara Mohini is regarded as the creator of the classical Indian dance form Mohini Attam. According to Encyclopedia Britannica “Mohini attam, (Malayalam: “dance of the enchantress”) also spelled mohiniattam or mohiniyattam, a semi-classical dance form from the state of Kerala, southwestern India. The dance is performed by women in honor of the Hindu god Vishnu in his incarnation as the enchantress Mohini.”

Puranic literature substantiates that Vishnu takes the form of Mohini to distract the Asuras and keeps them engaged while the Devatas share the elixir of immortality that appeared from the churning of the celestial milky ocean and thus saves the universe from destruction. The myth of Apsara Mohini forms the nucleus of Mohini Attam – The dance of the Apsara Mohini.

According to another Puranic narrative, once Lord Shiva was vulnerable by Bhasmasura after granting him a boon. Shiva, impressed by Bhasmasura’s penance, approved him a life-threatening boon that anyone whose head he touched with his hands would immediately turn into Bhasma- ashes. Thus, the name Bhasmasura. After receiving the boon Bhasmasura started misusing the boon and causing havoc on Earth. Shiva was worried and so were the Rishis and Munis. Vishnu was called in for help. Vishnu took the form of a beautiful Apsara – Mohini and appeared in front of Bhasmasura. Mohini was so extraordinarily good-looking, she lured Bhasmasura and he immediately fell in love with Mohini. Bhasmasura proposed marriage to her. She put forward a task to him saying that she was very fond of dancing, and would marry him only if he could match her moves identically. Bhasmasura agreed, hence they started dancing. Bhasmasura matched and replicated Mohini’s dance movements bit by bit. Soon he began to let off his guard and matched up to Mohini’s steps accurately. On one occasion Mohini posed with her hand placed on the top of her own head. 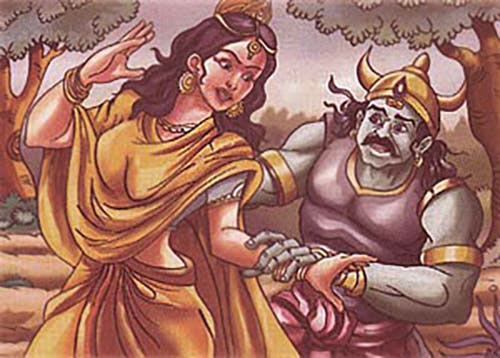 Bhasmasura imitated her; he was lured into touching his own head with his hands. Bhasmasura immediately burnt and turned into ashes. Bhasmasura had unknowingly, in the trance of Mohini’s love, applied the boon on himself. Enchantress Mohini had turned him into ashes. The dance Apsara Mohini performed came to be known as Mohiniyattam. Therefore, Lord Vishnu is regarded as the founder of Mohiniyattam. The costume of the Mohiniyattam dancers has the creamy milky hue matching the color of the milky ocean, the birthplace of Apsara Mohini. The drapes are bounded with the grandeur of wide gold borders; the dancers are bejeweled with golden ornaments, adorning white flowers.

The Apsaras have voyaged to beyond the Indian borders and can be seen in the performances of Balinese and Javanese dancers. In the Indonesian language, these celestial dancing nymphs are known as Hapsari or Widodari. Balinese dances such as Sanghyang Dedari and Legong depict Divine maidens in performance. The Khmer classical dance of Cambodia is called the Apsara dance. This dance draws thematic and postural inspiration from the mythological courts of the Hindu Gods and from its dancing Apsaras. Descriptions of Apsaras in the Angkorian temples in Cambodia often gives an illustration of female celestial figures seen dancing. The beauty of the Cambodian Apsara dancers is highlighted by their exceptionally meticulous costumes and simple yet flawless body movements. 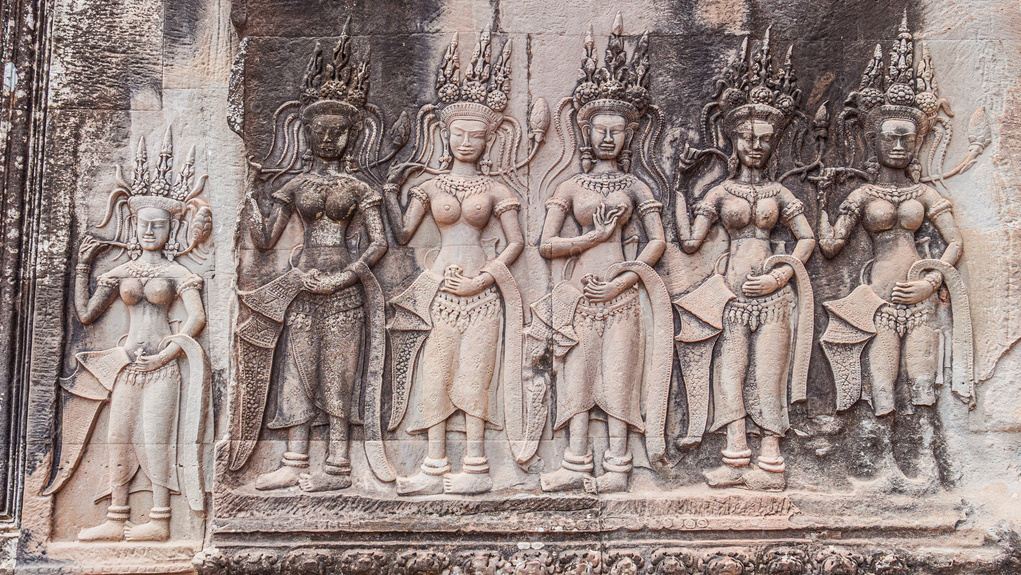 The sculptures of the Angkor temples inspire the rich golden embroidered decorative attires and the dance postures that are translated by the Khmer dancers to lucid excellence. These Cambodian Apsara dancers are draped in a sampot sarabap- A metallic yarn skirt wrapped around the lower body, then pleated and secured with a golden belt. The left shoulder is decked with an extensively embroidered shawl-like garment. Their Jewelry includes an embellished choker, a large metal square-shaped pendant, various types of ankle and wrists bangles, an upper arm cuff on the right arm, and body chains of various styles. There are several types of crowns- Mokot Ksatrey. Flowers also play an important role in an Apsara dance costume. These flower accessories include a rose above the right ear, floral tassels, and garlands of jasmine.

Apsaras, the celestial nymphs, have an intact place in the traditional and cultural aspects of Hinduism. They are frozen in the temple sculptures and have the capability to rouse goose-bumps even at their slightest sight. Their fascination is such that they continue to be seen in various dance styles and performances having Vedic roots.  These figures may be recognized as the Apsaras, Devanganas, Alasakanyas, Surasundaris, Yakshinis, Hapsari, Widodari or Natyaratanas – The mystical creations of Brahma; the dance messengers of Shiva; nurtured by Bharat Muni; gems of Indrapuri and superlative elements of attraction.