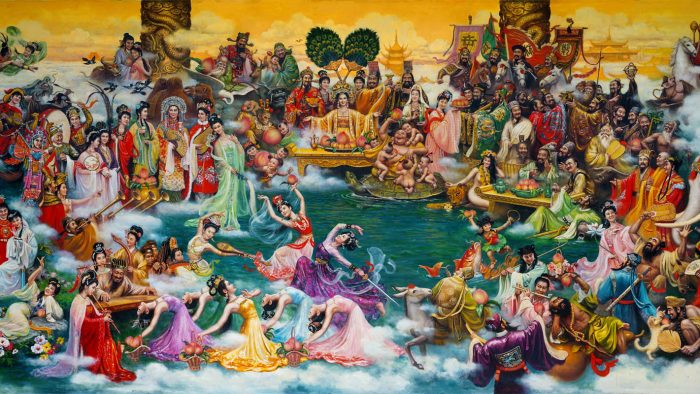 The DNA of Buddhism is woven by Vedic genomes, stored in the ethos of Hinduism. Buddhism is nurtured and nourished by ancient Hindu philosophy and traditions keeping it linked with the basics of the Sanatan Dharma. The four fundamental guidelines of Buddhism- Anadi, Karma, Samsara, and Moksha are derived from Vedic Hindu scriptures and these guidelines further progress towards the evolution of the Buddhist idea of attaining Nirvana.

The presence of Brahma, Ganesha, Shiva, Varuna, Yama, Durga, and a galore of other Hindu Gods, Goddesses, Demi-Gods confirms the Vedic connection between Hinduism and Buddhism. The similarity of different incarnations of Vishnu that can be seen mirrored in the different avatars of the Buddhist God ‘Lokesvara’ and the similarity of Hindu Goddesses to the Buddhist Goddess ‘Tara’ depicted as Green and White Tara, also establish Buddhism as an offspring of Hinduism. Buddhism also has the presence of Devatas, Rakshasas, Yoginis, Yakshinis, Dakinis, Gandharvas, and the Apsaras in abundance.

Migration of the Apsara

The process of popularizing the Buddha was initiated approximately around 2 century BCE. Buddhism escaped the Indian margins leaving its impact successfully across Asia. The Theravada school of Buddhism is referred to as the “School of the Elders”, is believed to be the oldest and closest to the original teachings of the Buddha.

Theravada Buddhism spread across modern-day Pakistan, Afghanistan, eastern and coastal Iran, and Central Asia. Subsequently, it reached China in the 2nd century CE and then expanded to Sri Lanka and Myanmar. From there, it reached the rest of Southeast Asia to Thailand, Cambodia, and Laos.

The 2nd century BCE also saw the rise of the Indian Mahayana school of  Buddhism that stretched to Vietnam, Cambodia, Malaysia, Sumatra, and Java. The Tibetan Mahayana School of Buddhism started in the 7th century CE, capturing the complete historical maturity of Indian Buddhism. From Tibet, it spread throughout the Himalayan regions and to Mongolia, Central Asia, and the regions of Buryatia, Kalmykia, and Tuva.

Buddhism swayed across Asia and so did the celestial Apsaras. Endowed with both Hindu and Buddhist traits, these beautiful enigmatic creatures of Brahma were portrayed in Buddhist art and architecture mostly floating in mid-air, wrapped in graceful and fluid robed attires, swaying aloft in the realm above the Buddha.

They are seen engaged in Divine duties of scattering blooms on the Buddha; occupied in performing on musical instruments for the Buddha; igniting incense sticks and in the process glorifying the Buddha and His vicinity. These beautiful aqua damsels can be notably seen depicted in and around the Hindu and Buddhist temples across India, Tibet, China, South Asia, and Southeast Asian countries.

Apsara in the Pali Canon

The oldest scripture in Theravada Buddhism, “The Pali Canon” has a legend that confirms the presence of  Apsaras in Buddhist scriptures since its early inception. As per the legend, the Buddha returned to the palace at Kapilavastu, to bless his half brother Nanda, the 16-year-old son of Mahaprajapati and King Shuddhodhana.

The Buddha visited Nanda just before his consecration. Prince Nanda was the apparent heir to the throne and after his crowning would follow his wedding ceremony with the very beautiful Janapadakalyani. 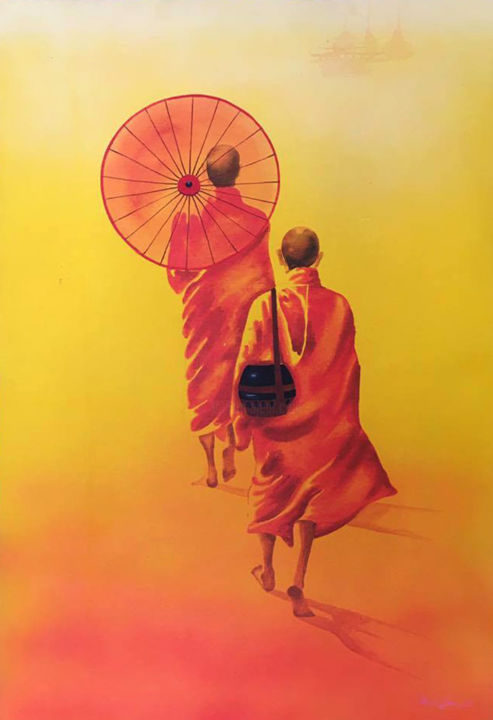 After reaching Kapilavastu, the Buddha gave Nanda his begging bowl and then proceeded to return to the NyaghrodhaVana, asking Nanda to accompany him. Nanda followed the Buddha in tow. When they arrived at the Nyaghrodha forest, the Buddha asked Nanda if he wished to join the Sangha as a monk. Nanda could not deny the Buddha and silently joined the Sangha.

Comprehending that Nanda was discontent as a monk, the Buddha used his supernatural powers and took him to a jungle and showed him an ugly little monkey. The Buddha asked Nanda to choose between a monkey and his bride-to-be -Janapadakalyani.

Nanda spontaneously replied that there was no match between the two and said that Janapadakalyani, was reputed to be the most beautiful girl in the land and was by far the more desirable than the ugly monkey. The Buddha then used his supernatural powers and took Nanda to the Heaven of the Gods where he made Nanda see the beautiful Apsaras, the celestial nymphs.

After gathering Nanda’s answers The Buddha made an announcement. The Buddha proposed to Nanda that if he maintained steady practice and remained a monk with the Sangha, his reward would be a rebirth among the beautiful heavenly Apsaras.

After Buddha’s offer, Nanda dedicatedly devoted himself to practicing Buddhism and was no longer interested in returning to Janapadakalyani. Nanda’s aim was to be born in heaven and remain engaged in the company of the most beautiful Apsaras.

The other monks, however, made fun of him because of his selfish, shallow, and lustful temperament and aspirations. Nanda was embarrassed and at that time the Buddha once again took Nanda on another spiritual journey.

This time they traveled into the depths of hell where Nanda was shown the most gruesome and horrifying demons preparing an iron cauldron to poach a prospective hell-dweller in the coming times. When asked whom they were preparing the hot cauldron for, the demons replied that they were preparing it for Nanda.

They further revealed that after his time in heaven would conclude, Nanda would have exhausted all his merits. The boiling cauldron would be his final destination. Frightened and ashamed, Nanda finally realized the shallow and deluded nature of his

previous aspirations and he finally attained enlightenment thereby becoming an Arahant- “One who has destroyed the foes of afflictions”.
This story may be interpreted in various ways, but it recognizes the presence and prominence of Apsaras in Buddhism as enchanting beauties of heaven and also as a means of spiritual transformation.

The passage of Buddhism from India to China happened through the ‘Silk Route’ by the endeavor of Buddhist monks and emissaries. Subsequently, after establishing the Buddhist faith in China, these Buddhist monks paved a route to transport the preaching of the Buddha to Korea and the countries that lay en-route. 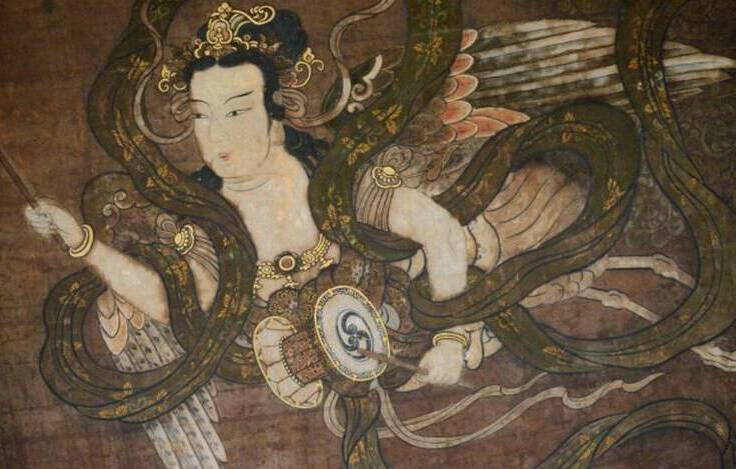 The Feitian or the Chinese floating Apsaras, seen in the Magao Caves, Yulin Caves, the Yungana, and Longmen Grottoes ceaselessly made their way to Japan along with the Buddha and His spiritual messages.

In Japan, the Apsaras manifested in various forms. The Vedic essence of these aquatic spirits was evident with noticeable physical changes in the manner they were attired and presented. The journey from India and the route of migration had added distinct features and characteristics to these water damsels.

These celestial beings are shown as assigned on duty to the ‘Ten’ the Japanese word meaning the ‘God’ or Devata or the Buddha, and are broadly addressed as ‘Tennin’. These female spirits were heavenly dancers and musicians, widely used for the ornamentation of Buddhist temples.

They are found standing on lotus flowers, or aerially seated or standing on floating clouds. These Tennins are believed to live in the Buddhist cosmic terrain as companions to the Buddhas and Bodhisattvas. Famous effigies of the Tennin can be found at the 11th century Byōdōin Temple at Uji in Japan.

Another set of Japanese Apsaras are popularly known as ‘Hieten’ – The flying winged Apsaras. These blissful beings supposedly invisible to the human eye are believed to fly with herculean power and speed.

Some of the best Hieten Apsaras are portrayed in the wall paintings in Hōryūji Kondō. The Rakuten Apsaras include the heavenly musicians playing harmonious instrumental melodious and are depicted flying around a Buddha figure. These can be seen attached to the canopies in Hōryūji Kondō and on the walls of Byōdōin Hōōdō  Kyoto.

The Legend of Hagoromo

The legend of Hagoromo – “The Feathered Robe”, is a famous legend that states that the Tennin can fly only due to their colored feathered kimonos, called ‘Hagoromo’. It is believed that the Tennin’s are unable to fly without these feathery kimonos and thus cannot return to their cosmic dwellings without it.

The story of Hagoromo is regarding a celestial being flying over Miho No Matsubara beach. The Tennin was overwhelmed by the enchanting scenic beauty of the white sand spreads carpeting the beach, the olive green pine canopy, and the sparkling water of the ocean. She removed her feathered robe and hung it over a pine tree before venturing into the relaxing waters for a bath. 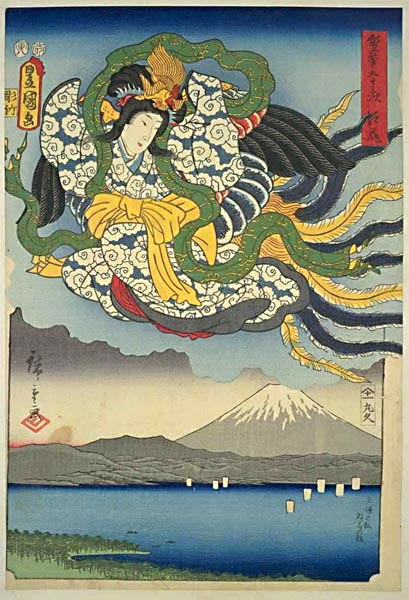 A fisherman named Hakuryo was walking along the beach and saw the Tennin bathing. He took her robe and refused to return it until she performed a heavenly dance for him. As the Tennin could not return to heaven without her robe, she agreed to Hakuryo’s request. She danced.  Hakuryo returned her feathery robe and thereafter she proceeded to heaven.

Today the Miho shrine situated in the Shimizu province located on the bay of the Pacific Ocean, overlooking Mount Fuji, preserves a piece of Tennin’s plumage. A statue of Hakuryo watching the dance is at the entrance to the park. It also has a 650 years old pine tree and it is believed that it is a tree, where the Apsara wearing a Hagoromo floated down from heaven to Earth.

The Apsaras are as much Hindus as Buddhists because of their Vedic gene pool. In Buddhism, these Apsaras depict the interstice between the Divine and the Earthly. They have successfully created a bond between beauty, principles, duty, and self-esteem. These damsels mostly remained in the custody of the Buddha guarding Him aerially and in the process beautifying His premises. Significantly the Apsaras represent a pious charm, spiritual ecstasy, and Divine obligation.