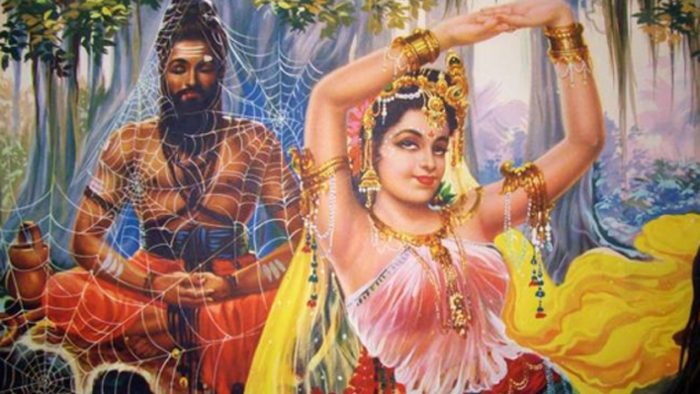 The many tempting amorous ensnares plotted by Dev Raj Indra, using beautiful illusive damsels –Apsaras, have created interesting storylines with various hues of fancy in the Hindu Puranic scriptures. These moments of unusual passion, frozen in time have been capable of creating new paths and characters in the Puranas.

Rishi Kandu, performed his ascetic Tapasya- penance, on the banks of river Gomati. Rishi Kandu was well versed with the Vedas and was dedicated to doing tough Tapasya in order to attain desired goals. His penance was extremely challenging. In summers Kandu Rishi meditated in the scorching sun and during the monsoons, he sat under the open sky and meditated undisturbed soaked in the wet clothes.

During the winter season, he meditated in the chill of the outdoors. Seeing his intense Tapasya Devendra grew very apprehensive and decided to take charge of disrupting his stringent penance. Dev Raj Indra engaged the most beautiful Apsara Pramlocha at the task of destroying Rishi Kandu’s tapa.

Apsara Pramlocha descended on the Earth near Rishi Kandu’s hermitage on the banks of river Gomati. Rishi Kandu visited the river every day to offer his morning prayers. Kandu’s eyes fell on the enchanting Apsara.

The stringent Rishi Kandu was distracted at the spur of her sight. He succumbed to romantic aspirations for the most gorgeous Apsara Pramlocha. He invited her to be his companion and lived with her in conjugal bliss on the Mandarachala mountains.

The Apsara and Rishi Kandu were immersed in the bliss of love with Kama deva and Rati showering their blessing on them in abundance.  After continuing to stay for a hundred years with Rishi Kandu,  Apsara Pramlocha requested him to allow her to go back to Devalok.

Rishi Kandu was madly in love with the Apsara, he was not at all keen to allow her an exit. He insisted that she continue with him for a longer period. The lines below convey the same

Meaning:  After a hundred plus years, she tells Kandu Maharishi that she desires to go back to Deva Loka, so he will be pleased and allow her to return to Deva Loka.

Meaning: Being very much attached to her, he tells her to stay for some more time.

Every hundred years Apsara Pramlocha put forward her desire to allow her an exit from Earth to Devalok, but Rishi Kandu kept deferring the same, requesting her to continue her stay. Pramlocha consented to his desire and continued staying with him enjoying the pleasures of life in his company and time moved on. Hundreds of years passed.

One day as evening set foot, Rishi Kandu hurriedly gathered himself to leave Pramlocha. Seeing him in a rush, Apsara Pramlocha enquired where he was going. He responded that it was his time to offer the Sandhyopaasanaa– the evening prayer ritual as the day had come to an end. Listening to him Apsara Pramlocha sarcastically laughed at him and informed him that many hundred years had passed and many such Sandhyopaasanaa had gone unattended.

Rishi Kandu was confused and ignorant. He confirmed with Apsara Pramlocha that he had seen her in the morning by the river Gomti and got her along with him, now the sun had set and it was evening. A day had come to an end. He insisted that she should confess the truth to him. Responding to Rishi Kandu’s ignorance, Apsara Pramlocha revealed the exactness of time that had passed.

Meaning: It is true that I came in the morning. That is not a lie. In the same way, hundreds of days have already passed.

Still, in a state of misunderstanding and surprise, Rishi Kandu asks Apsara Pramlocha to tell him the exact number of days they had been in each other’s company to which she replied-

Meaning: Nine hundred and seven years, six months and three days, have passed in my company.

Hearing Pramlocha give an account of 907 years, 6 months and 3 days ; Rishi Kandu bubbled with anger and frustration. He cursed himself of being lured by the Apsara and in the process getting his tapasya sabotaged. He regretted that for such an act of his, the Brahmanattwa he had attained stood destroyed and so had his knowledge on Vedas.

He let free his rage on the beautiful Pramlocha who stood shaken and profusely perspiring as she heard him fume. He did not curse her as he realized, she was assigned the task by Devendra. He held himself at fault as he had failed to keep control on his desires.

Rishi Kandu immediately commanded Pramlocha to leave him. Apsara Pramlocha started off on her journey to Deva Loka. She wiped her sweat with the leaves of the plants en-route.  The child in her womb, from Kandu Maharishi, ventilate out of her in the form of drops of sweat from her body.

All the foliage in her path gathered her drops of perspiration; wind brought everything together and the moon nurtured it. A girl was born. This girl child was named Marisha, who later became the wife of the ten Prachetasas

Meaning: Born of the buds of the plants, and she is this excellent woman called Marisha, and that Marisha, the trees are going to give you, so please control your anger.

Rishi Kandu was ashamed of his deeds and wanted to give up his life for the insane deeds he had done. That is when a Divine message conveyed to him that he should proceed towards Purushottam Dham and pray to Lord Vishnu for mercy and seek an apology.

Meaning: Kandu, when all his tapas got destroyed, went to Vishnu’s abode called Purushottama.

Rishi Kandu proceeded to the most sacred Dham, the Purushottama Kshetra, where Shri Vishnu had incarnated himself as Shri Jagannath. There he saw the Ashramas of great sages like Bhrigu,  Angira, and Markandeya .

For years he meditated and engaged himself in self-introspection. He recited Brahmaparastotra written by Pitamaha Brahma. Much pleased upon the recitation of the ‘Brahmaparastotra’, Shri Purushottama Jagannath Swamy, appeared before Rishi Kandu and offered to grant him a boon. Rishi Kandu asked to grant him complete liberation from the mortal world. The same was granted by Shri Jagannath.

The power of illusion is such that it captivates time and the movement of life is stalled forever in the zone of timelessness. Many influential fantasies were so perfectly crafted by the celestial maidens of Indralok that earthly beings could hardly escape these sweet entangles having deep clandestine consequences.

Rishi Kandu remained awestruck in the companionship of Pramlocha for more than nine hundred seven years just to realize that the irrevocable damage had been done under the spell of irresistible love and lust.