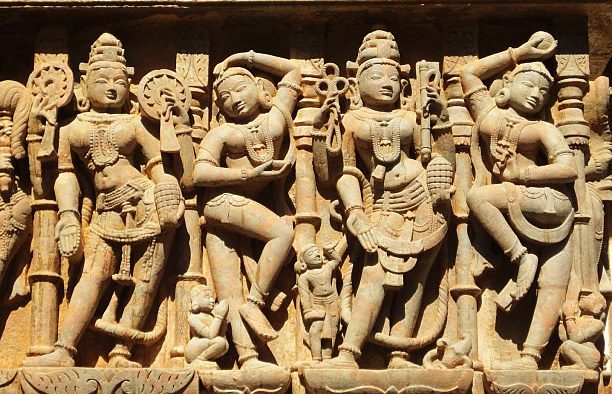 The ancient Hindu temple architecture follows strict principles of construction and floor plan adhering to the doctrine of the Vastu Shastra. These temples have allotted spaces for the display of the presiding Deity, Demigods, Apsara, Yaksha, Gandharva, and Nagas. The sculptures of Apsaras, Devanganas, or Alasa Kanyas as they variously addressed. These figures can abundantly be seen chiseled in ancient Hindu temples and are represented according to their prescribed iconographies and descriptions. 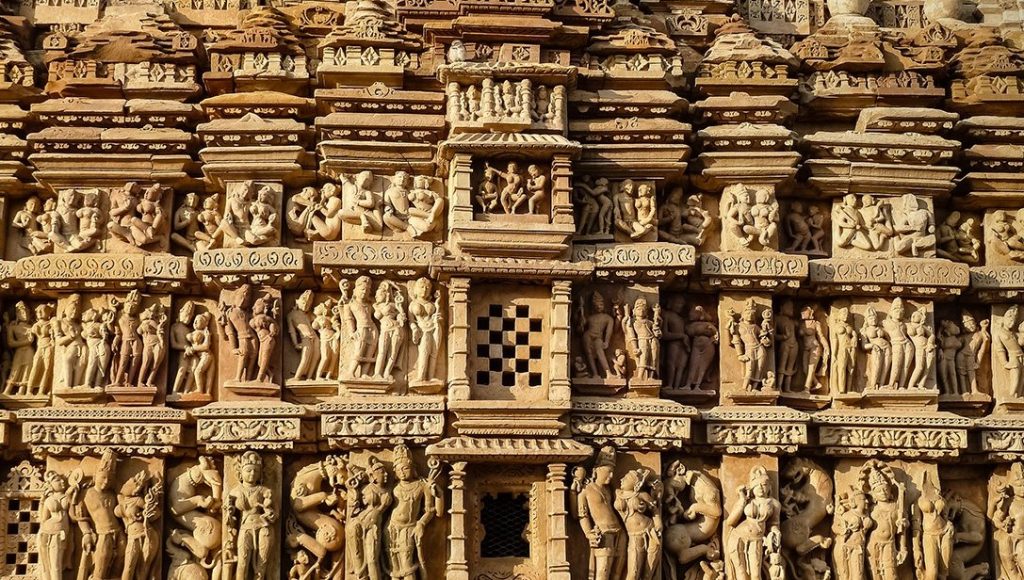 The Kasyapa Silpa Patala text gives detail on the iconography of Apsaras. It reflects that the Apsaras shown in temples should be having long and heavy hair, decorated with various flowers, and should be draped with clothes. Their thighs should be shown thick and touching each other. Their waist should be narrow; their face to be serene and contented, having a faint smile conveying ecstasy.

The Silpa Prakasa, a treatise on the Kalinga temple architecture principles describes celestial damsels as ‘Alasa’. The text mentions that these Alasas should be placed in the Gavaksa or Chandrashala, Sikhara also known as Vimana, walls, and other parts of the Mukhasala or the audience hall of the temple. These Alasas have names as recommended by the Shastras
The sixteen most important Alasa Kanya adorning the temples with distinct characteristics are listed below
1. Alasa is shown as laid-back.
2. Torana stands with an inclination towards the doorway.
3. Mugdha displays innocence.
4. Manini is the aggrieved one.
5, Dalamalika is shown garlanding herself with a branch.
6. Padmagandha is portrayed as smelling the lotus.
7. Darpana is the damsel holding a mirror.
8. Vinyasa is shown as fixed in meditation.
9. Ketakibharana adorns herself by wearing flowers.
10. Matrmurti is the image of a mother.
11. Chamara is shown holding a fly whisk.
12. Gunthana is depicted as hiding herself. She is shown displaying her back by holding drapery, flowers, and fans.
13. Nartaki is the dancer.
14. Sukasanka is the maiden playing with a parrot.
15. Noopura Padika is the damsel wearing ankle bells.
16. Mardala is the female drummer. 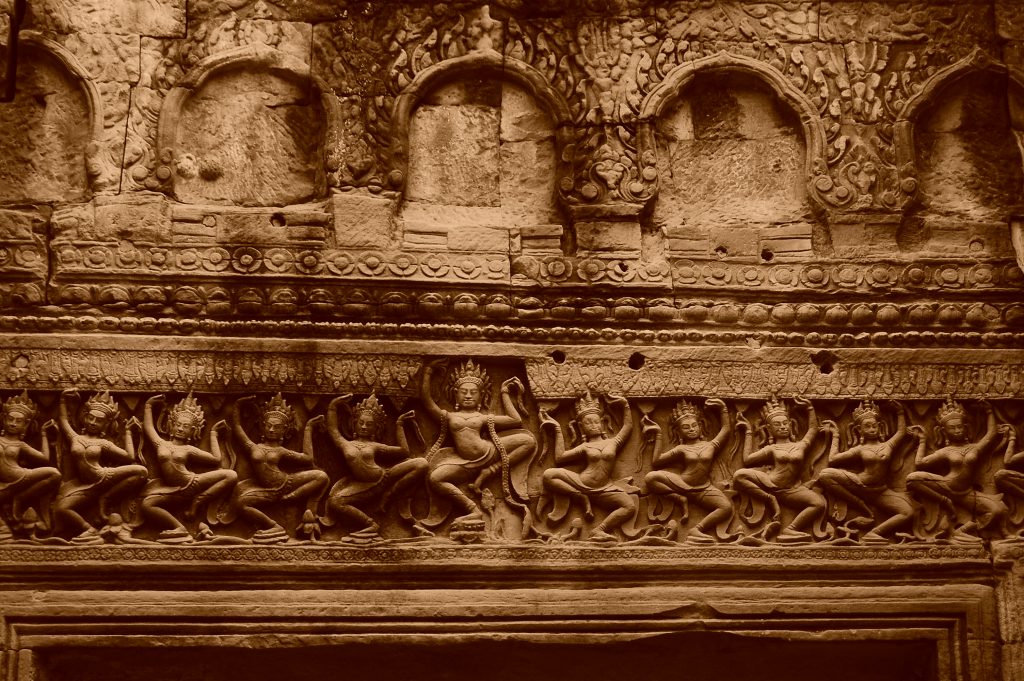 In the 15th-century architectural text, Ksirarnava describes that temples should be ornamented with nymphs of beauty and creativity. Each Apsara has some unique specifications that bestow each one an individual identity. Menaka carries a bow and arrow and has her left leg risen. Lilavati is amorously shown as shunning lethargy. Vidhichitra is depicted holding a mirror while she places a bindi on her forehead. Sundari is seen cleanly dancing. Subha is depicted pulling out a thorn from the foot. Hamsavali has big lotus eyes and is shown bending down as if trying to adorn anklets. Sarvakala is portrayed dancing with a varada in chintana mudra. Karpuramanjari is shown dancing robe less while bathing. Padmini is shown holding a stalk of a lotus. Padmanetra is the lotus-eyed one while Gudhasabda is shown holding Abhaya hasta and a child stands by her side. Chitrini is seen dancing with her left hand on the head. Putravallabha is the one who has a baby by her side. Gauri is seen killing a lion and Gandhari is depicted as a special one dancing with her right hand aloft. Devasakha is the one dancing a circular dance. Marichika is shown aiming a bow-arrow looking on the left side. Chandravali is the beautiful eyed damsel looking to the front with Anjali hasta. Chandrarekha is shown writing a letter; her forehead is broad like the half-moon. Sugandha is depicted dancing in circles and also holding the moon aloft. Satrumardini is depicted holding knives and dancing. Manavi is seen holding flower garlands and dancing. Manahamsa is shown dancing with her back visible to the viewer. Svabhava is the one whose body is bent in chaturbhangib, one leg is lifted and hands raised above the head. Bhavachandra is the one who is dancing with her hands and feet in the yoga mudra. Mrigaksi is dancing with full bloom and beauty. Urvashi is portrayed as killing the asura with a khadga and pulling him by his shikha. Rambha is depicted as holding knives in both hands and dancing with her right foot lifted up. Manjughosha dances in circles holding khadga in both hands. Jaya is shown dancing with a water pot on her head. Mohini is portrayed as dancing and embracing the male companion. Chandravaktra is shown dancing gracefully by lifting one foot. Tilottama is depicted dancing either by holding a manjira or Pushpabana.

The Samarangana Sutradhara (1000–1055 AD) the text on temple architecture gives insights on the architectural traditions in the Malawa region in particular, and Northern Indian Nagara style, in general. The author Paramara King Bhoja of Dhar, describes that the Torana should be adorned with Makara , heads of elephants, leaves as well as groups of Apsaras. He puts forward that the Vimana, Vitana, Stambha and the Bumi of the Jangha of a temple should be adorned with groups of dancing Apsaras, Siddhas, Gandharvas, Yaksas, Devas and Kinnaras, depicting a playful mood.

Apsaras are cosmic beings who have the blessings of the Gods and the affection of the Devatas. These cosmic creations are free-flowing spirits, skillfully versed in sixty-four ways to please the senses. The mysticism and mystery around these Divine nymphs make them all the more entertaining, effusive, and fulfilling.