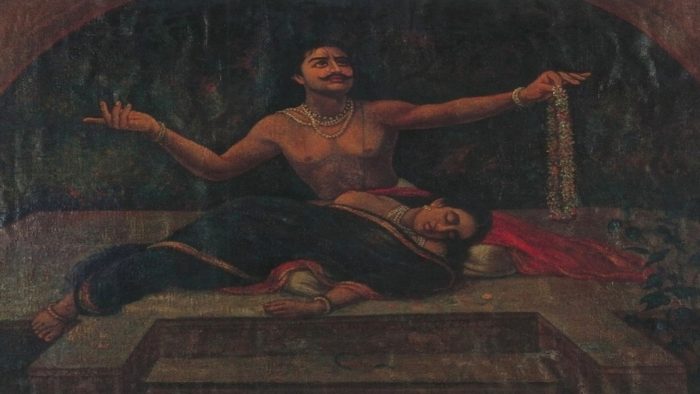 The Ikshvaku dynasty as discussed in the great Hindu Epic Ramayana, the Vishnu Purana and the Mahabharata was initiated by the great King Rishabh who was later popular by the name Ikshvaku. King Ikshvaku is considered the foremost of the celebrated Suryavanshi clan who ruled the kingdom of Kosala.

The Suryavansha or the Solar dynasty later came to be recognized as Raghuvansha or Raghukul popularly named after King Raghu, the great grandfather of Shri Ram. King Raghu’s son the virtuous Aja was the father of King Dasharatha who was the father to Shri Ram, Lakshman, Bharat, and Shatrughan.

As per ancient scriptures, King Dasharatha was born to Aja and his beautiful wife Indumati, the mortal incarnate of Apsara Harini.

Apsara Harini and the curse of Maharishi Trinabindu

Like all other Apsaras of Indrapuri, Apsara Harini too was gifted with all the superlative attributes of loveliness and charm. Like all the other Apsaras in the court of Indra, she too had to live by the orders of Lord Indra.

Meaning:  Dev Raj Indra was apprehensive of the rigorous penance practiced by Rishi Trinabindu and to curtail his meditation he sent to him the celestial damsel named Harini, capable of interrupting his contemplation.

Meaning: Rishi Trinabindu through the anger caused by that disruption to his penance, which rippled the shoreline of his mental calmness, cursed her –Apsara Harini. He pronounced – she who exhibited in front of him, her attractive move would be born an earthly woman in the sub-lunar world.

After being cursed by the enraged Rishi Trinabindu, Apsara Harini pleaded to the irritated Rishi to excuse her and rendered a sincere apology. She conveyed that she had been entrusted with the task of distracting him and that she had no personal interest in upsetting him or his Tapasya.

She informed that she was just following the command of her master, Dev Raj Indra.  Rishi Trinabindu heard Apsara Harini and decided to amend his curse by limiting her stay as a mortal being till she beholds a celestial flower on the Earth.

Apsara Harini was born on Earth as the daughter of King Bhoja of Vidarbha as Indumati.

The Birth of Dasharatha

Princess Indumati, the mortal reincarnate of Apsara Harini was the epitome of sensual beauty. Her corporeal self was like a piece of poetry crafted with the most attractive imagery. She was gorgeous and delicate. King Bhoja of Vidarbha arranged for her Swayamvara which was attended by many kings and princes.

Indumati was attracted to the youthful and handsome prince of Ayodhya –Aja. She chose Prince Aja as her husband and left for Ayodhya. Soon Aja’s father King Raghu handed the kingdom of Ayodhya to Aja and left. King Aja was head over heels in love with his wife, Indumati and both lead a happy married life. Soon the couple was blessed with a child.

Meaning: Both the Lady Earth denoting the kingdom of Ayodhya  and Lady Indumati  having obtained most valorous Aja as their husband, the first lady (Ayodhaya),  delivered numerous jewels while the second (Indumati) gave birth to a valiant son, in company with her husband Aja.

The son born to King Aja and Queen Indumati was named Dasharatha. Dasharatha grew and became a capable king and also the father to Shri Ram.

Meaning: Whom the wise knew by the name of chariot- ratha with the prefix ten – dasha; who was known by his fame in all the ten quarters; whose glitter was like that of the thousand-rays of the sun and who was the father of the enemy of the ten-headed monster – Ravana – lady Indumati delivered him as son.

Post the birth of prince Dasharatha, Queen Indumati and King Aja spent a lot of time in solace and remained deeply in love with each other. Once King Aja , after settling his duties in the kingdom moved out of his capital,  to the royal garden along with his queen Indumati. There they spent some quality time in isolation and were very happy to be together.

While they amused each other in the garden Deva Rishi Narada, was passing the path above in the sky. He was on a journey from North to south with the intent of an audience with Lord Shiva. At that time Lord Shiva was at the Gokarna temple , on the shores of the southern ocean.

As Dev Rishi Narad moved in the heavenly trail above the garden, his garland of celestial blooms fell down towards the Earth and landed on queen Indumati leaving her still.

Meaning: That heavenly garland far surpassed the seasonal finery of earthly creepers by means of its excess nectar and fragrance and now wafted by wind secured a convenient resting-spot on the surface of the full breasts of the king’s beloved,  Indumati.

Queen Indumati after being hit by the heavenly garland drifted into an eternal slumber. Her body was deserted by the senses, leaving her husband king Aja in intense gloom. But in the process, Apsara Harini had liberated herself from the mortal earthly bonds in the very manner in which Maharishi Trinabindu had assured her.

The lines below mention the termination of Apsara Harini’s curse.

Meaning: Born in the family of the kratha kaishika-s she became your queen and after the lapse of a good long time got the cause of the cessation of her curse as the garland with celestial flowers fell from the sky and brought her earthly existence to a close.

Post the mortal departure of Queen Indumati, king Aja was struck by grief and decided upon giving up his life. He gave up his life at the sacred confluence of the rivers Ganga and Sarayu and thereafter securing a unification with his wife Indumati, the celestial damsel Harini of Indrapuri. Dasharath was left orphaned.