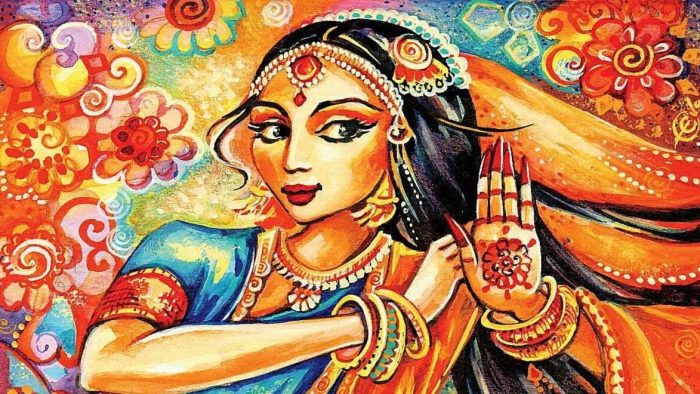 The Hindu epic Mahabharata has the mention of Queen Gandhari and her hundred sons. The Mahabharata is much read and recognized with Pandavas popular as Panch (Five) Pandavas and Shatam (Hundred) Kauravas. The brothers fought the battle of Kurkshetra in which all the hundred sons of Gandhari were martyred and the Pancha Pandavas lived to rule the kingdom of  Hastinapur . The mythological epic Ramayana has a mention of Apsara Ghṛtācī or Ghritachi and her hundred beautiful daughters.

Apsara Ghritichi was a beautiful nymph and has her mention in both the Ramayana and the Mahabharata. Apsara Ghritachi was a gorgeous damsel with black curly hair and red lips who plays an important role in the Kusha lineage.

In the Ramayana -Bala Kand ,  Rishi Vishwamitra narrates the story of Kusha and his four sons to Shri Ram while camping on the banks of River Magadhi. Maharishi Vishwamitra introduces Shri Ram to his Kusha lineage . King Kusha was a Chandravamsha ruler who had four sons – Kushambha, Kushanabha, Asurtarajasa and Vasu. All the four sons ruled independent kingdoms. Kushanabha built a city called Mahodaya.

Meaning – Oh! The successor of the Raghu family, the virtuous rajarshi Kusanabha begot one hundred beautiful daughters through a nymph named Ghritachi.

The hundred daughters of Apsara Ghṛitachi and King Kushanabha were endowed with immense beauty and multiple talents. One day as the hundred daughters of Apsara Ghṛitachi were singing, dancing, and playing musical instruments in the palace garden, Vayu- The Wind /air God saw them. Vayu Deva was so fascinated upon seeing them, he proposed marriage to them. He offered to eternalize their beauty if they agreed to marry him. Lord Vayu said

Meaning –  Oh beautiful damsels! Teenage is always transitory, expressly in humans, but by marrying me you will achieve undiminished youthfulness and forever you can be youthful like immortal females.’ Thus Air-god said to those girls.

The hundred girls laughed at Vayu Deva for his proposal as they felt dishonoured. The obedient hundred daughters of King Kushanabha refused Lord Vayu’s proposal by saying that they would require the permission and consent of their father to marry him. They said

Meaning – That time shall never come. Oh! God with distasteful thoughts, when we, at our liberty, may look up for our grooms overlooking our veracious father.

Vayu was not expecting such an evasive response. Vayu was furious to get a negative consent to his proposal. In a rage he entered all the hundred girls, he disfigured them leaving them ugly and undesirable.  Vayu turned all of them into hunchbacks.

Meaning –  Hearing their sentence of rejection, Vayu, the Air-God whose impact is powerful, very angrily entered into all of the limbs of those girls only to disfigure them.

With tearful eyes and remorse, the girls narrated the entire incident of the curse to their father. King Kushanabha became sad to see his deformed daughters but praised the daughters for being responsible and dutiful. From that day the city of Mahodaya came to be known as कन्या- कबुज , Kanyā-Kubja – The city of the hunchbacked maidens.

Rishi Vishwamitra continued the story of how the beauty of the hundred girls was restored. He furthers the narrative by introducing Brahmarishi Chuli who was looked after by a beautiful Apsara named Somada.

Meaning – While that sage is in the practice of asceticism a celestial female served him at the place of his asceticism, safety be with you oh, Rama, she is Somada, the daughter of Urmila.

Apsara Somada dedicatedly served Chuli without creating hindrances in his penance.  Rishi Chuli was pleased with her service and wanted to fulfill a wish she desired. Apsara Somada shared her desire to bear a son of the great Rishi Chuli. Since she was unmarried, she requested Rishi Chuli to grant her a son through his powers.

Meaning – Somada says to Rishi Chuli, “I am unmarried and nobody’s wife, safe you be, and as I took shelter under your kindness it will be apt of you to endow me a son with your faculty of asceticism.’

Brahmarishi Chuli blessed Apsara Somada with a great son with Brahma like aura. Apsara Somada’s son came to be known as Brahmadatta, the ruler of Kampilya.

Meaning – Thereafter, with the mere touch of his hand, a hundred daughters were cured of their humpback and freed from anguish. They assumed great beauty.

King Kushanabha, saw all his daughters released from the curse of Vayu and was very happy. With immense faith in Brahamadatta, king Kushanabha and  Apsara  Ghṛitachi performed the marriage rituals of their hundred daughters and sent them as wives of Brahmadatta to  Kampilya. On reaching Kampilya, King Brahmadatta’s Apsara mother Somada was overjoyed with the deed of her son Brahmadatta.

After the departure of his hundred daughters, King Kushanabha desired for a son and started the Putrakameshti Vedic ritual, in order to beget a son. His wish was fulfilled and soon he was blessed by a virtuous son named Gaadhi. King Gaadhi became the father of Maharshi Vishwamitra.