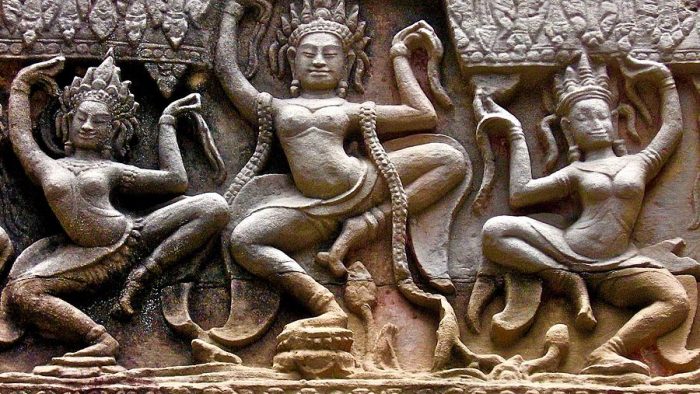 From Vedic poetry to dramatics, literature to art the conspicuous Apsaras have been viewed in various proportions including graceful lyrical imagery, illustrated through similes and elusive metaphors. The Apsaras have the most well-known descriptions in ancient Indian Vedic and Classical literature both in Sanskrit and Prakrit. These mysterious nymphs evoke the imagery of striking feminine bodies; elaborately describing them by using marvelous similes and metaphors drawn from nature to denote different parts of the body, their stance, their actions, moods, and limitations.

The Hindu epics Mahabharat and Ramayan have given an introduction to many Apsaras playing a pivotal role in advancing and adding undisputed value to the progress of these epics. The plots of these epics have numerous legends and characters that are interlinked with the Apsaras.

The Mahabharata mentions the creation of Apsara Tillotama, by the Divine Architect Visvakarma, to destroy the asura siblings Sunda and Upasunda. The story of Tillotama was narrated by Dev Rishi Narada to the Pandavas in the Mahabharata. Rishi Viswakarma created her by the amalgamation of all animate and inanimate elements of beauty found on Earth.  Urvashi is mentioned in the Mahabharata, as the celestial dancer of Indralok. When Arjuna visits his father to receive Divine weapons, his eyes fall upon Urvashi. Indra seeing this sends Urvasi to impress upon Arjuna. Urvashi amorously gets attracted to Arjuna and he in turn refuses her approach. Extremely irritated with Arjuna’s rejection Urvashi curses him to lead the life of a eunuch for a year. 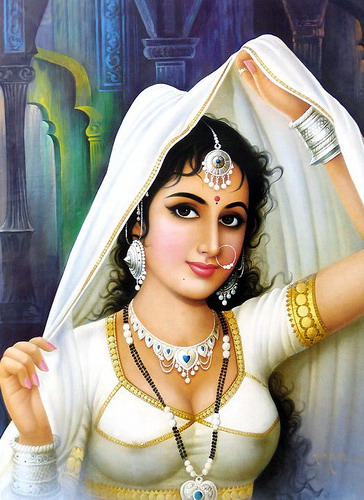 The Ramayana has a mention of Apsara Menaka – A nymph of extraordinary beauty. Taking commands from Indra, Menaka used her charm to destroy Rishi Viswamitra’s power of penance. As described in the Ramayana 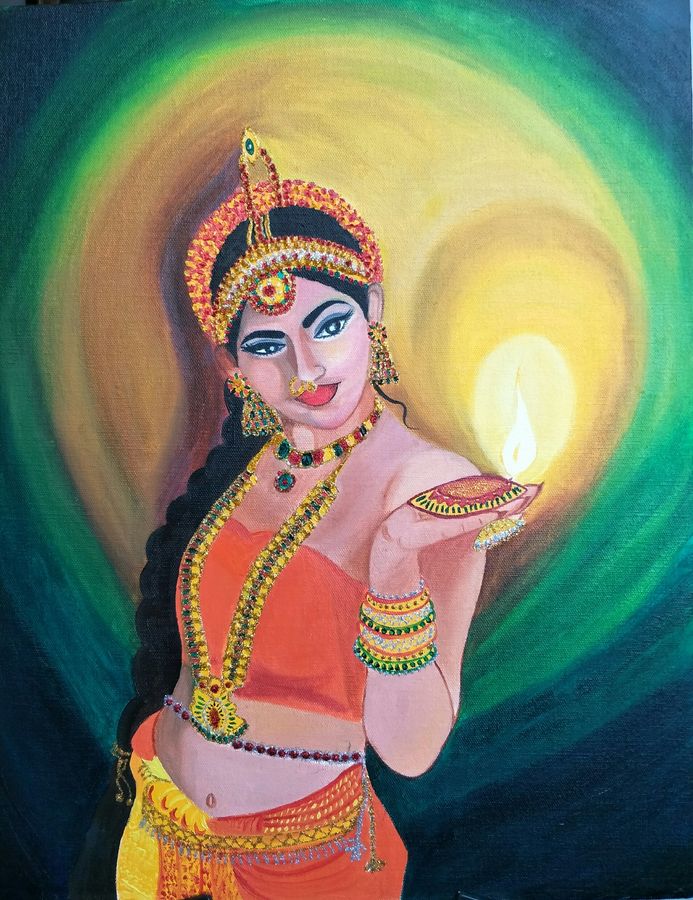 The above shloka translates to –

“On seeing her (Menaka) Viswamitra came under the influence of the God of love and fell in love with her. He said O Apsara welcome to my hermitage stay here. I am infatuated with you: Oblige me. I wish you well.”

The Matsya Purana mentions the creation of Meneka for the purpose of drinking the blood of the Andhaka demons.

As per the Puranas, Rambha is the Queen of the Apsaras. The Ramayana elaborates that she was sent by Indra to disturb the penance of Rishi Vishwamitra. Furious by her presence and motive to disturb him, Rishi Vishwamitra curses her to become a rock for thousands of years until a Brahmin freed her from the curse. 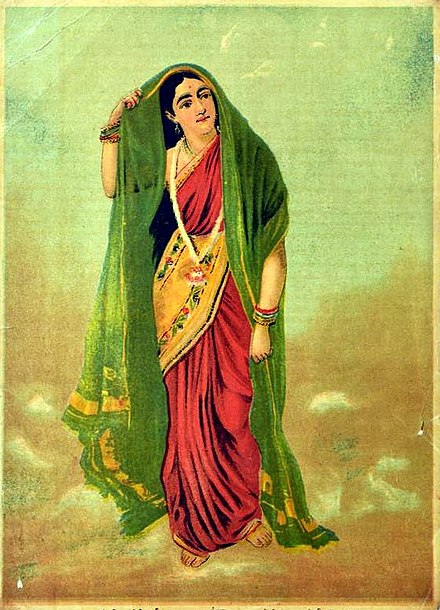 Viswamitra’s curse is elaborated below-

‘O luckless Rambha, since you have endeavored to distract me from my desire to conquer wrath and passion, you shall turn into a rock and remain so for ten thousand years’.

The Ramayana also has a mention of the demon Ravana being cursed by Rambha for trying to molest her.

The Vishnu Purana has a mention of the charming Apsara Mohini who was also considered an incarnation of Vishnu himself. She evolved out of the ocean during the Amrita Manthan and distracted the asuras from consuming the urn of Divine elixir that came out in the process. Stories about Mohini and Shiva have been popular in the southern version of the Bhagavata Purana. It elaborates on the passionate attraction of Shiva towards Mohini who is the female form of Vishnu. 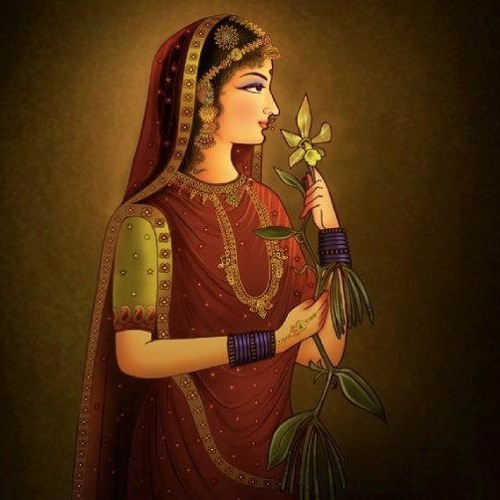 The most famous literary description of elaborating the beauty of these celestial maidens in Natya and Kavya can be found in Kalidas’s plays and poems. The first play, written by the famous poet and playwright in the 4th Century CE “Vikramōrvaśīyam”, illustrates the Puranic love story of king Pururavas and Apsara Urvashi. It describes the story of celestial Urvashi when she was cursed out of Indrapuri to live on Earth with humans and then she begins her life with King Pururavas, stays with him for four years, and gives birth to a son before leaving him and returning back to Indralok. 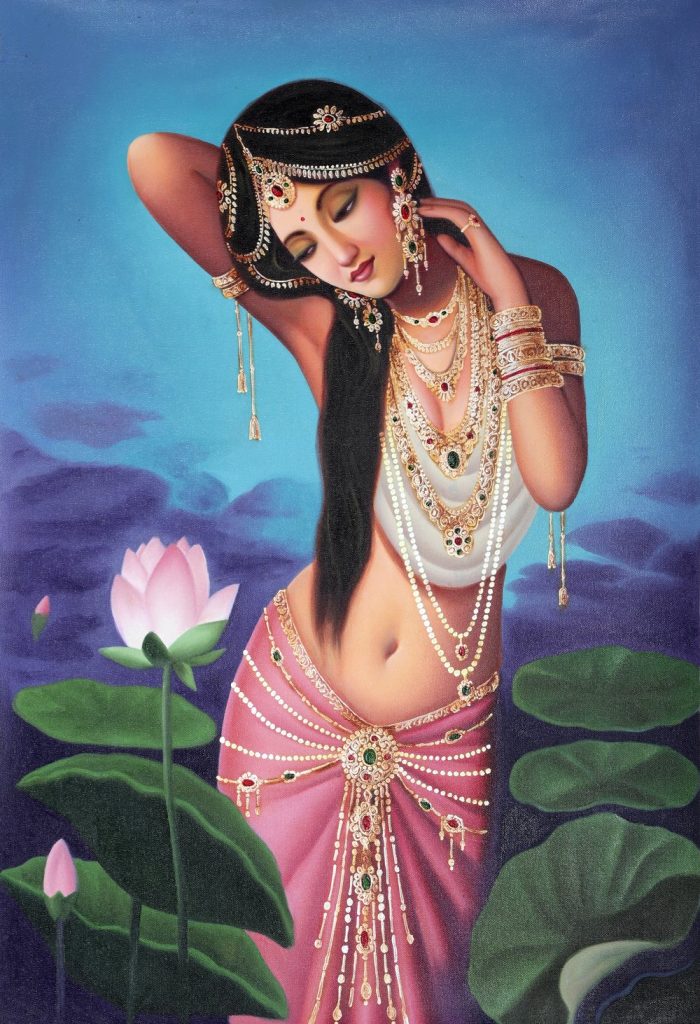 Thereafter follows Kalidas’s “Abhijnānaśakuntalam” – Here the protagonist is Shakuntala, daughter of the sage Vishwamitra and the Apsara Menaka. Shakuntala is responsible for the birth of Bharat and also to have laid the foundation of the Bharat Dynasty that leads towards the battle of Kurukshetra between the Kauravas and Pandavas. 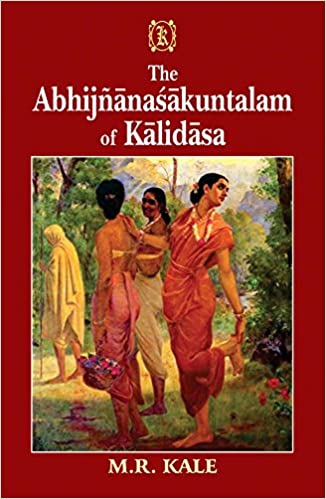 The 11th-century anthology of Indian legends, myths, and folktales “Kathasaritsagara” written by the Kashmiri Sanskrit scholar Somadeva mentions the tale of Apsara Alambusha and her acknowledgment towards accepting the love of a Vasu named Vidhuma who had accompanied Indra to the court of Brahmā. This attraction between Vasu and Apsara attracted the wrath of Indra’s curse. They were both cursed to be born as humans to satisfy their love and get married. Vasu Vidhuma was born as Sahasranika, a famous Chandravanshi king, and Apsara Alambusha was born as Mrigavati. They got into a nuptial bond and had children. The “ Kathasaritsagara” retells many such Puranic stories. 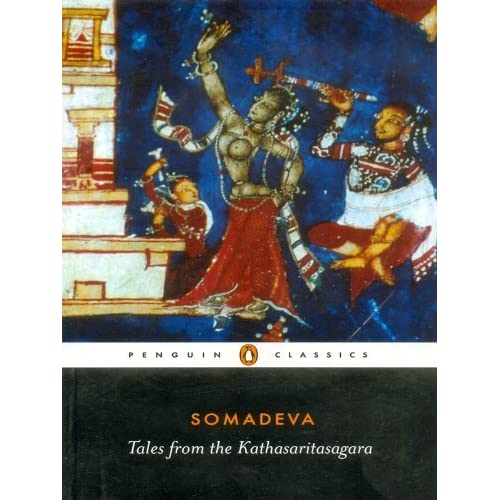 Sri Arobindo in his Early Cultural Writings- 1890-1910, discussed in a chapter dedicated to Kalidas and his characters writes about his depiction of the celestial nymphs. He writes “The Apsaras are the most beautiful and romantic conception on the lesser plane of Hindu mythology. From the moment that they arose out of the waters of the Milky Ocean, robed in ethereal raiment and heavenly adornment, waking melody from a million lyres, the beauty and light of them have transformed the world. The crowd in the sunbeams, they flash and gleam over heaven in the lightings, they make the azure beauty of the sky; they are the light of sunrise and sunset and the haunting voices of forest and field. They dwell too in the life of the soul; for they are the ideal pursued by the poet through his lines, by the artist shaping his soul on his canvas, by the sculptor seeking a form in the marble; for the joy of their embrace the hero flings his life into the rushing torrent of battle; the sage, musing upon God, sees the shining of their limbs and falls from his white ideal. The delight of life, the beauty of things, the attraction of sensuous beauty, this is what the mystic and romantic side of the Hindu temperament strove to express in the Apsara. The original meaning is everywhere felt as a shining background, but most in the older allegories, especially the strange and romantic legend of Puruvas as we first have it in the Brahmanas and the   Vishnoupurana”.

The enigmatic charisma of the celestial Apsaras has at all times attracted the interest of poets, authors, painters, and visual art performers. The few mentioned references of Apsaras in classical Sanskrit literature as discussed in the present piece is minuscule information concerning the mysterious and magnificent mythological marvels.