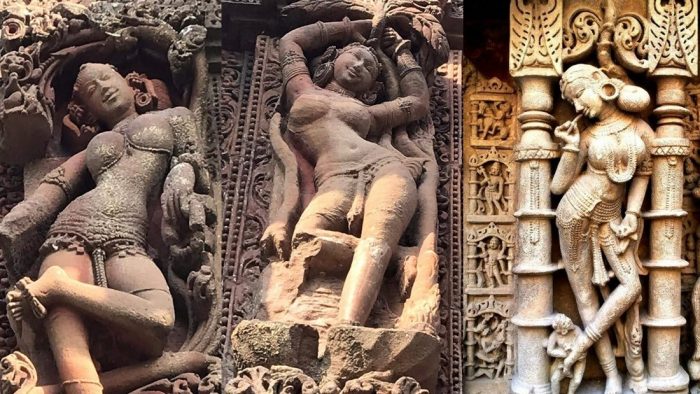 Apsaras, the celestial maidens of Indra Puri were enigmatic creations with enthralling elegance. These sensuous maidens of illusion created by Gods had a role to play. They had to lure, attract and amuse. Apsaras, were the free flowing female spirits endowed with supernatural powers, charm, calm and capability to commence or cease any moment. These Devanganas were endowed with oodles of creative brilliance. They were experts in dance and music; these attractive damsels were the court entertainers of Indra Puri -The heavenly kingdom of Lord Indra. These cosmic nymphs were the companions of the Gandharvas, while some were created with a devoted mission to be a reason or a cause. Derived from the Sanskrit word, ‘apas’ meaning water, Apsaras are known to have evolved out of the clouds and water. Just like water is ever flowing, Apsaras are as fluid and uncontained like the gurgling chasm of celestial Divinity. Urvashi, Menaka, Rambha, and Tilottama are the most prominent in the Hindu Mythology.

The Rigveda mentions these Apsaras as aquatic nymphs. Atharvaveda introduces Apsaras as the inhabitants of the waters. It discusses their heavenly association with the stars, clouds and rain. The Satapatha Brahmana Samhita often describes Apsars as transforming themselves into a kind of a marine bird. The Apsaras are seen in close contact with the woods and the wet. The Atharvaveda puts forward that the Apsaras are fond of the dice game and create the basis to bring in fortune at the dice play. They are also feared as causing mental void. There are two types of Apsaras -Aloukika (worldly) and daivika (Divine).

During the Samudra Manthan– the churning of the milky ocean many jewels came out of the sea that included some famed Apsaras namely Rambha, Menaka, Punjisthala . They are said to have emerged after the appearance of the Kalpavriksha. These Apsaras were gorgeous women , draped in attractive robes and bejewelled with golden ornaments. These celestial nymphs were engaged in alluring by their intoxicating movements and amorous glances. Manu Sastra asserts that Apsaras were created with the seven Manus to serve as wives of the Gods and daughters of pleasure.

As per Matsya Purana, Rishi Kashyapa is said to have married thirteen daughters of Daksha. In companionship with his thirteen wives he fathered the Devas, Asuras, Nagas, Gandgarvas, Apsaras, flora, fauna and all of humanity.  The Apsaras are said to be the daughters of   Rishi Kashyapa and his wife Muni. These celestial daughters of Rishi Kashyapa were – Alambusa, Misrakesi, Vidyutparna, Tilottama, Raksita, Rambha, Manorama, Kesini, Subahu, Suraja, Surata and Supriya. The Brahmanda Purana has a mention of Brahma asking Lord Indra to send some chosen Apsaras from his palace to become the wives of Vasudeva Krishna.

According to the  Nāṭya Śāstra, Apsaras were mental creations of the Universal Creator- Brahma . In the beginning of the Treta Yuga, Brahma went to deep rumination; he recalled the four Vedas, picked up suitable parts from them and created a new Veda. He picked up hymns from the Rigveda, melody and music from the Samveda, gesticulation and emotion from Yajuveda and aesthetics of the rasas from the Atharveda . He further amalgamated all these selected essentials from all the four Vedas and called it Natyaveda- The scripture of Arts.

Brahma passed the Natyaveda to Indra and prescribed that the Devatas should practice the Natyaveda. But the Devatas were not dedicated enough to learn and perform the new scripture on performing art. Brahma then decided to train his hundred children in Natyaveda. Brahma delegated the task to Bharat Muni and assigned him with the duty to be the Natya Guru of his hundred children. Bharat Muni started educating them but in the process realized that Brahmas’ hundred children would not be able to perfect the Nāṭya Śāstra without female companions. Brahma then created the Apsaras. He endowed these celestial beauties with the skill of dance, music and enact. Thereafter Brahma passed these Apsaras to Bharat Muni as female companions to accompany, polish and train his hundred children. These Apsaras created by Brahma were called Natyaalankar– Jewels of Acting. The Apsaras mentioned in  Nāṭya Śāstra are Manjukesi, Sukesi, Misrakesi, Sulocana, Saudamini, Dovadatta, Devasena, Manorama, Sudati, Sundari, Vidagdha, Sumala, Santati, Sunanda, Sumukhi,  Magadhi, Arjuni, Sarala, Kerala, Dhrti, Nanda, Supuskala and Kalabha.

The Vayu Purana refers to the origin of Apsaras from various sources. It describes Apsaras as Manasa Kanya- mental creation of Brahma gifted them with beauty, energy and force of nature. It presents them as dazzling maidens, similar to the stretched rays of the sun and also bearing the soft illumination from moon and benevolence. It confers their birth to the fire of the Yagna. They are also said to be born out of the ocean, elixir, wind and lightning. These Apsaras have varied characteristics like being caring, loving, magical, and ferocious. The Vayu Purana gives the physical description of these celestial maidens as golden hued with the whiff of sweet fragrance. They perform their errands without the assistance of wine and only with touch alone. The assemblage of Apsaras at Indra Puri includes- Misrakesi, Chasi, Varnini, Alambusa, Marichi, Putrika, Vidyutparna, Tilottama, Adrika, Laksana, Devi, Rambha, Manorama, Suvara, Subahu, Purnita, Supratisthita, Pundarika, Sugandha, Sudanta, Surasa, Hema, Saradvati, Suvrata, Subhuja and Hamsapada.

In the Vishnu Purana ,  Apsaras are mentioned as the attendants of Surya. They attend to Surya in the form of the twelve Adityas who are the indicators of the various seasonal changes that happen throughout the year. In the Vishnu Purana, Rishi Parashar describes that between the extreme northern and southern points, the sun has to traverse at one hundred and eighty degrees in a year, ascending and descending. The movement of his chariot is presided over by Divine Aditya, Rishis, Gandharvas and Apsaras, Yaksas, Nagas and Rakshasas.

According to Vamana Saromahatmya when Vamana shed his dwarf-like form, in a twinkling of an eye he manifested the form which consisted of all the Gods. His eyes were the moon and the sun, the sky was his head and the Earth his feet, his toes were the Pisachas and his fingers the Guhyakas. The Visvedevas were in his knees, the Sadhyas were in his skin. In his nails appeared the Yaksha and the Apsaras appeared in the contours of his body.

Apsaras have been a consistent part of Hinduism, having an insightful presence in Vedic literature. The commonality lies in the fact that these beautiful creations were females with captivating powers and immense dedication to their creators.