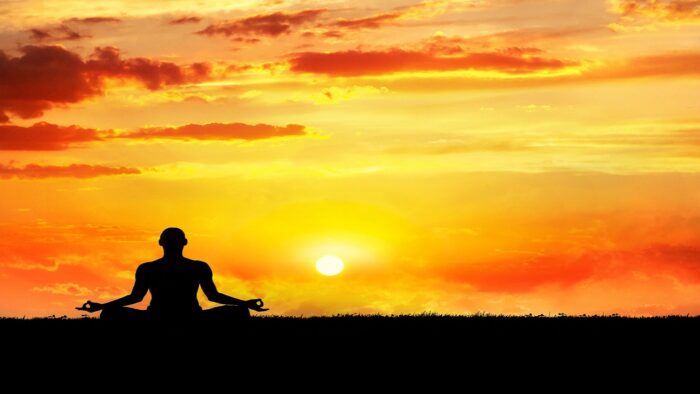 The words that appear in the Yogasūtras will be sequentially dealt initially and then terms from other prominent Yoga texts will be taken up. Every śabda-yoga unit will analyze five terms. Three compound terms are taken for analysis in this part viz – atadrūpapratiṣṭha, śabdajñānānupātī, vastuśūnyaḥ. These three compound terms yield five unique terms for Analysis which are –

This is a compound term. It has four member terms – na (not), tat (that), rūpa (form), pratiṣṭhā (establishment). The compound split and its literal meaning is as follows –

In the Yogasūtras this compound term is an adjective of the term Viparyaya (wrong knowledge).  As can be seen from the compound split – Viparyaya is described by this adjective – as that (knowledge) which is not established on the true form of the object. Eg: Seeing a snake in a rope – the form of Snake is the atadrūpa (not the rope’s essential form) and this knowledge (that it is snake) – Viparyaya is established (pratiṣṭhā) in that form.This clarifies the context in which this compound term has been used in the Yogasūtras.

In this compound the word -na (not), tat (that) are indeclinable and pronoun respectively. And these two words will not be discussed. The other two unique terms – rūpa(form), pratiṣṭhā (establishment) will be discussed.

As can be seen above there are three words śabda, jñāna & anupātī. The word anupātī which means that which follows has been coined for this particular context and hence there will be no recurrences of the term in Yogic literature. The Word jñāna has already been analyzed in the previous part (ŚABDA-YOGA – 5.1   and   ŚABDA-YOGA – 5.2). The word Śabda remains for analysis from this compound term.

This compound word is an adjective the word विकल्पः and hence it is in masculine gender.

The compound split is as follows –

The two constituent words in this compound vastu & śūnya are important terms that have significant implication and presence in the Yoga texts and hence these two will be analysed.

The root is – रूप रूपक्रियायाम्  –rupurūpakriyāyām – to create a shape, to formulate, to create a mental picture

The suffix is अच् – acto indicate the meaning the doer(कर्तृ). This suffix is added as per the grammatical rule नन्दिग्रहिपचादिभ्योल्युणिन्यचःnandigrahipacādibhyolyuṇinyacaḥ (aṣṭādhyāyī3.1.134)

There is one entry in the Amarakośa on the word Rūpa.

The form, sound, smell, taste and touch – these are the objects (of the senses)

There are five occurrences of the word Rūpa in this text.

It is to be noted that Rūpa is also part of the compound word Svarūpa. There are nine occurrences of the word Svarūpa in Yogasūtra. Those references are not collected here as they have already been discussed in Sabda-Yoga -3 under the entry Svarūpa.

They five occurrences of Rūpa are as follows –

This sūtra defines Viparyayavritti – here the word Rūpa is used to indicated that the – Viparyaya is a knowledge that is not is not established in the form of the object. Something is superimposed on the object being perceived.

Here the word Rūpa is used to show that the mind follows the various forms (Rūpa) like vitarka ,vicāra, ānand and āsmitā in saṃprajñātaSamādhi

The power of disappearing/concealing the form is achieved by doing saṃyama (dhāraṇā, dhyānaandsamādhi) on the form (rūpa) of the body.

Attainment of rūpa (pleasing form for the eyes), lāvaṇya (symmetry and beauty of all limbs) etc will be attained by the Yogin by conquering the five elements (by the practice described in the sūtra 3.44)

Even if obstructed by species, space, time (in course of various births) there will be continuity (in the living being exhibiting species-appropriate behavior inherited from past births) because – recollection and (corresponding) subliminal impressions will be of the same form/nature (ekarūpatva)

There are 23 references to the word Rūpa in this text. Out of these 15 references are from the 11th chapter which is called as the viśva-rūpa-darśana-yoga – a chapter where Lord Kṛṣṇa reveals his supreme form to Arjuna. Hence the various aspects of the Rūpas – forms of Lord Kṛṣṇa is described vividly in these numerous references

There are two references to Rūpa in this chapter

Here it can be seen that the word kāmarūpa is used. It is stated herein that – kāmarūpa – in the form of desire – the knowledge has been covered which is like an insatiable fire.

In this verse also the same expression kāmarūpa is used. It has been stated here that the enemy in the form of desire (kāmarūpa) has to be conquered by focusing on the consciousness that is beyond the intellect.

There is a lone reference to the rūpaword in this chapter.

The expression acintyarūpa is found used in this verse. The supreme being (paramātman) is glorified and extolled as the one endowed with unthinkable (manifest) forms and meditation upon such supreme being is instructed.

As indicated earlier there are 15 references to the word rūpa in this chapter hence the only the specific expression on rūpa from the 15 verses with reference to the verse numbers will be given with short explanation. Diligent readers can look up in the text and explore more on each of these verses.

The expression related to Rūpa are culled from each of the verses of this is presented below – which not only clarifies the usage of the expression rūpa, but in a way summarizes the details of the cosmic Rūpa that was revealed to Arjuna.

This chapter has just one reference to rūpa.

In the two verses of this chapter the manifest world has been compared to a Peepul tree and its various parts. This verse is interesting when it says – the form that has been described may not be perceived or may not remain in the same manner(narūpamasyehatathopalabhyate). This indicates the change-prone, unstable nature of the manifest existence.

This chapter also has just one reference to rūpa

The expression Anurūpā  is found here, which means ‘in accordance with’. It has been clarified here that the nature of faith that one has is in accordance to his/her Sattva. The word Sattva refers to the mind that possesses unique combination of subliminal impressions (saṃskāra) that varies from individual to individual.

This is the final reference to the word rūpa in the last chapter.

There are six references of the term Rūpa in this text.

virūpākṣa is the expression found in this verse that contains the word rūpa. This verse that lists the great teachers and practitioners of Haṭhayoga also mentions virūpākṣa – as one among them.

rūpalāvaṇyasaṃpannā – (the lady) who is endowed with pleasing form and grace/beauty.

It is stated herein that – As a lady who is beautiful (rūpa) does not attain the purpose of life without a man (spouse), similarly,  mahāmudrā and mahābandha practices do not achieve their purpose without mahāvedha.

jyotīrūpam – the one who which is in the form of light – is the expression found here in.

jyotīrūpa – is the expression that contains the word rūpa. The unmanīmudrā is elaborately described in this verse. After being seated and set ones focus – it is advised that a Yogi should focus on the conscious Atman that is in the form of light (jyotīrūpa).

nādarūpa – in the form of nāda – is the expression found in this verse. This verse occurs at the end of the description of the practice of nādānusandhāna – practice of focus on internal Yogic nādas (sounds). It is clarified here that whatever internal nāda is heard is śakti (the counterpart/consort of parameśvara) only. Through this śakti in the form of Nāda, Parameśvara – the pure consciousness is attained.

The word rūpa as such is used in this verse. This verse is in the form of description of a Yogi who has attained the state of Samādhi – he said to have transcended all sensory experiences such as smell, taste, form, touch and sound. He does not even see himself and the others in such a state.

This analysis was educative in imparting how form has been treated in Yogic texts.

It is interesting to note the wide range of meanings that the word Rūpa brings in to serve the Yogic purpose. These use various aspects of the word Rūpa that include –

As evident from this analysis the external form was neglected in the Yogic context but rather utilized to facilitate the inward journey.

Unit 6 To be Continued…