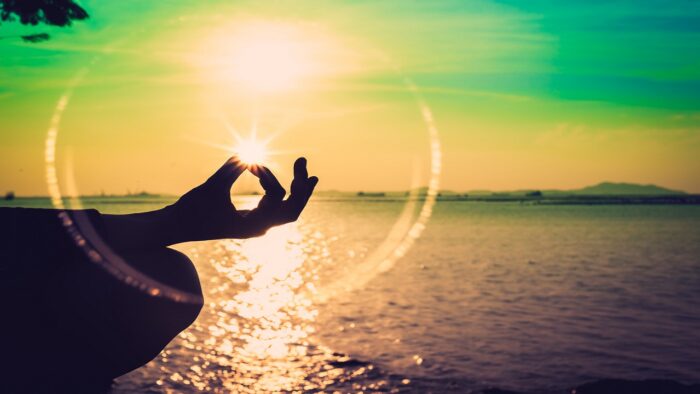 ….This is in continuation of Śabda-yoga -5

The words that appear in the Yogasūtras will be sequentially dealt initially and then terms from other prominent Yoga texts will be taken up. This śabda-yoga article will analyze one term. The term for this article is

The derivative statement is – ज्ञायतेइतिज्ञानम् – jñāyateitijñānam – The act of knowing is jñāna.

There is one reference to the term in Amarakośa –

jñāna refers to application of the mind in liberation

Though there are very wide connotations to the word jñāna (as could be seen from the subsequent Yogic textual references) Amarakośa indicates only a limited sense of the word.

There are 20 occurrences of the term jñāna in this text – found in each of the chapters of the text. This indicates the importance of the word. But it has to be noted that the maxim (13) references are from the third Chapter. A chapter wise summary of the appearance of the expression is given below

A brief description of the occurrence is as follows –

There are two occurrences of the word jñāna in this chapter (Sūtras 28, 34)[3].  A brief description of the two references are as follows –

Various kinds of supra-sensory/special kinds of knowledge that are attained through the practice of various saṃyamas are discussed in this chapter. Twelve such special types of knowledge are presented in these 13 Sūtras. They are –

There is just one reference to jñāna in this chapter (Sūtra 31)[5]. jñānasya  ā”nantyā – The endlessness of knowledge (jñāna) is stated here. This power manifests when the mind attains the state of DharmamehgaSamādhi. On attainment of this Dharmamegha – afflictions and actions wane and by that ability to know endlessly(the objects of the world) is attained.

It can be noted from the above references that knowledge in the context of Yogasūtrasis both the means and the end. To illustrate – while contemplating on svapnanidrājñāna (1.38) is a means to calmness and focus of the mind – the various types of supra-sensory knowledge mentioned in the third chapter – is the end attained by practice of various Samyamas.

There are 55 reference to the use of the wordjñāna in this text. The most occurrences among yoga texts consulted.  Excepting chapters 1,2,8,11 & 17 – in the rest of the 13 chapters, the expression jñāna is found. This indicates the importance of the term in this text. A chapter-wise summary of the context of appearance of the term is presented below.

It is to be noted here that the knowledge – jñāna –mentioned in all above occurrences- refer to the knowledge of pure conscious nature of the Ātman.

There are three references to the word jñāna in this chapter (verses 15-17)[9]. The following is the brief description of the references –

In this chapter there is just one reference to the usage of the word jñāna (verse 8)[10].

Its stated here that – jñānavijñānatṛptātmā (verse 8) –a person who has become satisfied by the knowledge and also the experiential understanding about the consciousness is called as Yukta (a person with a calm mind).

There are 3 references to the usage of jñāna in this chapter (Verses 2,15,20)[11]. The context of appearances of the term is as follows  –

There are three references to jñāna in this chapter (Verses 1, 12, 15)[12]. They are briefly described below –

There is just one reference to jñāna in this Chapter (verse 12)[14].This verse praises renouncing of the results of actions. In that process – it progressively glorifies various paths to self-realization such as abhyāsa (practicing discernment), jñāna (knowledge about the consciousness), dhyāna (meditating upon that which has been known – the consciousness) andkarmaphalatyāga (renouncing the results of actions). as supreme in this context. Karmaphalatyāga is gloried as supreme among all these paths.

There are two references to jñāna in this chapter (verses 10, 15)[17]. The context of the occurrences is as follows –

There is just one reference to jñānain this chapter (Verse 16)[18]. It has been mentioned here that –

jñāna-yoga-vyavasthiti – Being established with single pointed focus on the knowledge of the consciousness – is stated as a divine quality in this verse.

It could be seen from the above references in the Gītā that the jñāna used here predominantly indicates the knowledge of the consciousness. Knowledge is glorified as the supremely purifying. Methods of attaining the knowledge from the wise by service, questioning and respecting them was indicated.

Further, many interesting and insightful compounds that has jñāna as a constituent has been used such as – jñānayajña, jñānayoga, jñānatapas, jñānāsi, jñānadīpa, jñānasaṅga. It also interesting to note the usage -jñānasaṅga – where knowledge is also stated as a bondage that has to be transcended.

Finally, the expression – jñānaṃvijñānasahitam – that has been mentioned in a couple of occasion – in the text indicates that this text considers that theoretical knowledge with experiential understanding as essential.

It could be observed here that – true to the structure of the text after discussing various practices of Yoga in the prior three chapters, inputs on knowledge is predominantly found in the fourth chapter that deals with Rājayoga.

As could be observed with the numerous references in the three Yogic texts consulted  (20+55+6 = 81) the importance and centrality of the term – Jñāna is very much evident. But each of the text reveals very useful dimensions of Jñāna

Bhagavadgītā- As evident from the references and their summary it could be observed that Bhagavadgītāis a veritable treasure trove of insightful inputs on knowledge of consciousness. The frameworks of knowledge such as definitions, classifications etc that are found in this text lend themselves to application of these insights in fields other than spiritualty also – such as education.

Haṭhayogapradīpikā – There is a general perception that Haṭhayoga is all about practice. The references on jñāna indicate the goal of haṭhayoga practices. It is also worth noting that – characteristically this text in a couple of occasions emphatically states that without practice that leads to regulation of the mind the breath – any talk of knowledge about the consciousness is dry and false prattle.

Though there is diversity of inputs from the three texts but one common thing that all texts seem to agree is that – theoretical knowledge and experiential understanding should go hand in hand.

[1] Note: As the quotes are too numerous on the term jñāna in Yoga texts, all the original quotes are given in the footnotes and the summary of the context of their occurrences is given in the main body.

[8] A Vedic performance where offering is made to divinity by forgoing ownership in what is being offered. Yajña in general denotes the attitude of selflessly offering something to others.

[20]Verse 22 does not use the word Jñāna, hence it has not been given above.