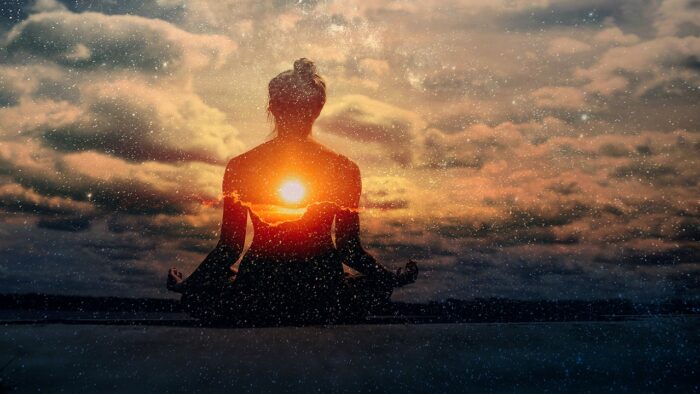 The words that appear in the Yogasūtras will be sequentially dealt initially and then terms from other prominent Yoga texts will be taken up. This śabda-yoga article will analyze four terms. The four terms for this article are –

There is one entry in the Amarakośa on this term

Pratyakṣa refers to knowledge generated through the senses (through object contact)

This lexical entry is quite in line with the etymological derivation.

There is just one occurrence of this term

Among the five activities of the mind pramāṇa (right knowledge) – right knowledge is one and pratyakṣa (direct perception through the senses) is counted as one among the sources of correct knowledge as indicated by the Sūtra.

There is just one reference to pratyakṣa in this text. It is found in the 9th chapter. It is as follows –

Haṭhayogapradīpikā– The word pratyakṣa is not found in this text

It becomes evident based on the references above that among the Yoga texts – that in Haṭhayogapradīpikā, there is no discussion on epistemology. This seems to be true in the case of Bhagavadgītā also, where only a passing mention of the term pratyakṣa is found. Even in yogasūtra the epistemological discussions are minimal and restricted to only one Sūtra quoted above.

The derivative statement is – अनुमीयतेअनेनइतिअनुमानम्- anumīyateanenaitianumānam that (process) by which inference is done.

To explain – The process of inference is instrumental (lyut) in knowing (Mā – to measure) about an object that follows (anu) sensory input and the grasp of concomitance of the major and minor terms. Hence it is called as Anumāna.

Lexicon– There is no reference to this term in Amarakośa

There are two occurrences of this term in this text and both are from the first chapter.

Bhagavadgītā & Haṭhayogapradīpikā– The word is not used in these two texts.

As stated earlier – it becomes evident that Yoga texts do not have much epistemological discussions. It is also interesting to note that while inference is accepted as a valid source of authentic knowledge – there is higher state of clarity in Yogic tradition than that of inference. This also shows the relative position of inference in Yogic context.

The derivative statement would be – आगम्यतेअनेनइतिआगमः –āgamyateanenaitiāgamaḥ -that by which (knowledge) is attained (knowledge arrives towards oneself). Though this is the derivation, conventionallyit is used to indicate authentic knowledge attained through verbal testimony.

Lexicon– There is no reference to this word in the Amarakośa

There is just one occurrence to this term in this text.

As described earlier, through this sutra – verbal testimony is considered as one among the three modes of valid knowledge in the system of Yoga.

There are three occurrences of the term āgamā in this text.  Though the word exists, as would be evident from references below – it is not used in the sense of verbal testimony.

In all the three occasions the word āgama is used to indicate arrival.

In the first Gītā instance above (2.14) the sense-object contact is stated as āgamāpāyi – that which comes/experienced and perishes (transient).

In the next two references from chapter 8 (verses 18 & 19) – the process of cosmic creation and dissolution is described.  In the both the verses, we find the expression rātryāgame – when the night time of Brahman comes all the beings get dissolved. The duration of day time and night time of the Brahman is indicated in verse 8.17 – as thousand Yugas each (one yuga here refers to one catur-yuga (64, 80,000 years) – commentary on the Gītāby Srīdharasvāmī[4]).

There are two occurrences of the word āgamā in this text. Here also the two occurrences do not indicate the meaning verbal testimony. As can be seen below – in the first occasion – āgama – refers to mere coming, in the second occasions it refers to a class of literature. The details in that regard are as follows –

This is a verse that speaks of- people being distracted by the promises of material benefits made in the Āgamas and the Nigamas and they do not know about the ways to cross sufferings (through Yogic practices). The Jyotsna commentary here defines agama as[6]– those that arrive and ascend the intellect (to clarify various practices and truths) –- the śāstras and Tantras.

Hence one needs to be context conscious in using the terminology even for Yogic purposes.

The derivative statement is मथतेइतिमिथ्या[7]–mathateitimithyā-  That which aGītātes, shakes and stirs.

Conventionally Mithyā in the texts refer to something which is wrong/false. Indeed, going by etymology falsehood – aGītātes, shakes and stirs.

The solitary Amarakośa reference on the term is as follows –

There is just one reference to mithya in this text. It is as follows –

As evident from the reference Viparyaya –activity of the mind is defined as false/wrong knowledge (mithyā-jñāna) which not based on the form/attribute of the object that is being perceived/known.

In this text also there is a solitary reference. It is in the context of Karma-yoga. Here also the term mithya is part of a compound – mithyācāra –

As evident from the reference – Even while not employing the senses of actions, but remembering the objects of the senses in the mind is called as Mithyācāra -false practice or hypocrisy. Lord Kṛṣṇa states this to emphasize that this is not the way to do Karmayoga.

This is the very last verse of the text. It is indicated here that – without making the Prāṇa move in Suṣumnā, without making the semen firm (control over sensual attractions), without attaining the state resembling Sahaja (Samādhi) – merely speaking about the knowledge (of Yoga) is boastful, false prattle (mithyāpralāpa).

In conclusion it can be stated that mithyā, meaning false/wrong – is used an adjective in the yogic texts considered here – falsehood in knowledge, practice and prattle (mithyājñāna, mithyācāra, mithyāpralāpa). Unlike in Vedānta it is not used to indicate illusionary or false nature of the entire creation (jaganmithyā).