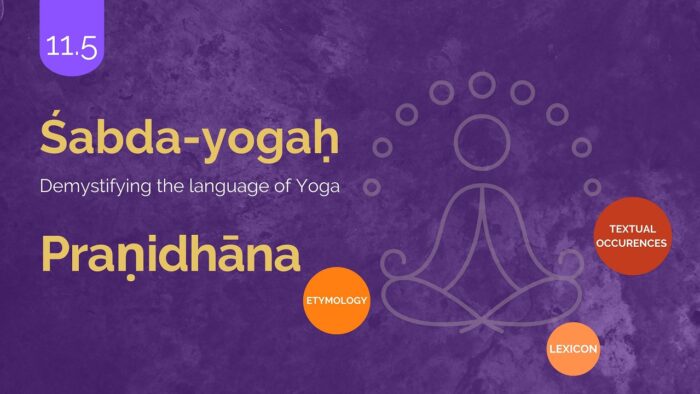 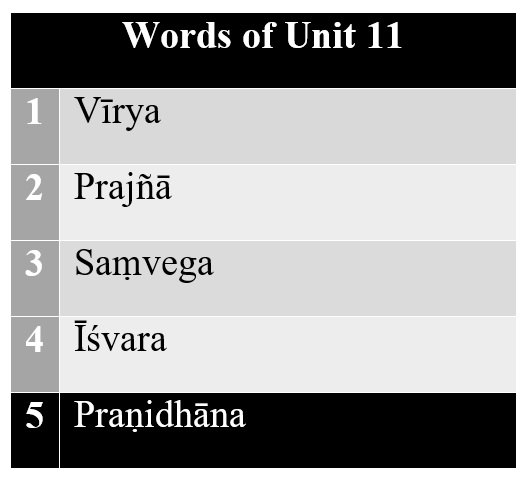 Hence the derivation of the term would be – प्रणिधीयतेइतिप्रणिधनम् –praṇidhīyateitipraṇidhanam-  the act of placing clearly and completely/ surrendering.

There is one reference to the word in amarakośa. It is as follows –

(It is to be noted that this verse is not found in certain versions of Amarakośa. The source of this reference is Amaraaupasana[3])

There are four occurences of the term in this text. Once in the first pāda and thrice in second pāda of the text. These sūtras have all been explained as part of the previous entry – īśvara (śabdayoga 11.4).

5) Yoga-siddhānta-candrikā–  प्रणिधीयतेतदेकमात्रनिष्ठंमनःक्रियतेऽनेनेतिपुनःपुनारूपंप्रेमतत्साधनमन्त्रजपाराध्यत्वज्ञानादिरूपाद्वक्ष्यमाणाद्भक्तियोगाद्–-  praṇidhīyatetadekamātraniṣṭhaṃmanaḥkriyate’nenetipunaḥpunārūpaṃprematatsādhanamantrajapārādhyatvajñānādirūpādvakṣyamāṇādbhaktiyogād -Praṇidhāna refers to making the mind single-pointed by again and again doing various practices that are instrumental to that end – in the form of japa of the mantras, worshipping etc

There is just one occurence of a related term to Praṇidhāna in this text. It is as follows –

Haṭha-yoga-pradīpikā–There are no usages of the term in this text.

It could be observed that the word Praṇidhāna is a unique expression found in the Yogasūtras.

But it should be noted that though Bhagavadgītā does not use the word Praṇidhāna – the word Bhakti is profusely used and an entire chapter (chapter 12) is devoted to Bhakti yoga which indicated by the term Praṇidhāna.

And interestingly in Haṭhayoga neither has any major discussion or practice based on Praṇidhāna or Bhakti – indicating its focus more on the practices related to the body, breath. In Haṭhayoga even in the realm of the mind – more than the emotional dimension of human psyche (Bhakti)- the focus is more on training the mind to be fixed and focused on the various cakras and the Nāda.

2) It involves surrendering all actions to the supreme guru.

3) It involves relinquishing desire for the results of actions.

5) It includes physically prostrating to the divinity.

6) It is in the form of repetition of Praṇava and meditating upon its meaning.

7) It also includes the worship of the divinity.

8) In the process of expression of devotion – the fixing or focusing of the mind on the divinity is essential.

9) Praṇidhāna is not a onetime action – it involves repetition of expression of devotion.

10) Praṇidhāna culminates in visualizing of oneself as the Brahman.

Thus these are the ideas and insights that could be gained by analyzing the term Praṇidhāna following the Śabdayoga methodology.