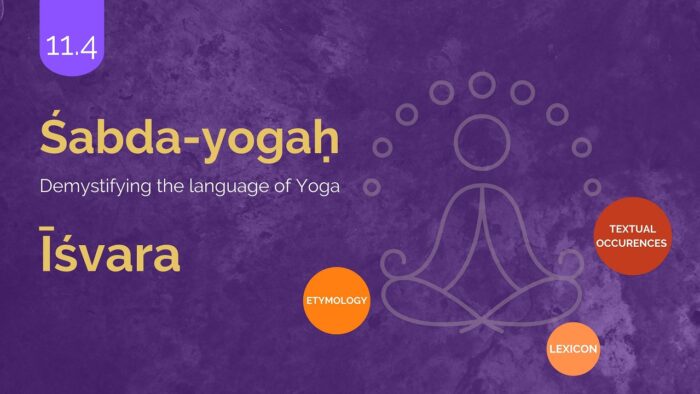 We will take up important Yogic terms from Sūtra-s 1.20 – 23 The terms that will be analyzed in this Unit are – 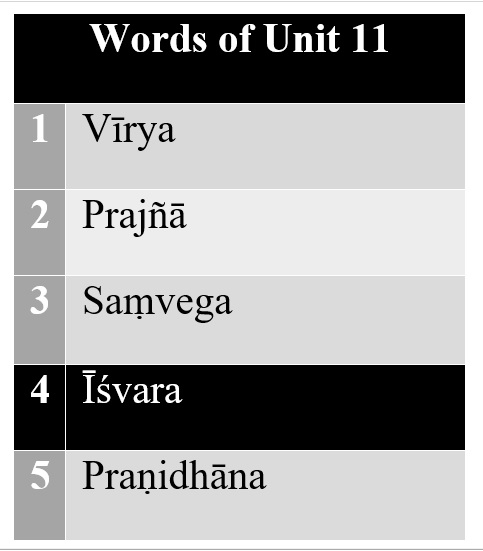 Based on the above grammatical etymology the derivative statement of the word would be – शास्तिइतिईश्वरः – śāstiitiīśvaraḥ – the one who governs etc.

There are two entries in the Amarakośa to the term Īśvara. They are as follows –

It could thus be seen that īśvara points to lord Śiva and the one who governs.

There are five references to the term Īśvara in the Yogasūtra – two in the first pāda and three in the second Pāda. We shall analyse the occurrences as per the Pādas.

Sūtra 1.23 speaks about the practice of īśvarapraṇidhāna – devotion/surrender to Īśvara – by which the state of Samādhi is attained quickly. The subsequent Sūtra (1.24) defines who Īśvara is – towards whom devotion has to be expressed. It states that – Īśvara is a particular consciousness which is untouched by the afflictions, actions, the fructification of actions and the residual subliminal impressions. It is to be noted that by implication, according to Yoga Philosophy, all other individual souls are entangled in all these aspects beginning from afflictions.

It in the Sūtras 2.1 and 2.32 – the practice of īśvarapraṇidhāna is once again advocated as part of the practices of Kriyāyoga and the Niyamas of Aṣṭāṅgayoga respectively. It is interesting to note that – in the context of delineating practices for advanced practitioners of Yoga in the first chapter īśvarapraṇidhāna was given as an optional practice to attain the state of Samādhi quickly. But for the intermediate practitioners and the beginners for whom Kriyāyoga and Aṣṭāṅgayoga respectively are prescribed, īśvarapranidhana is an integral limb of their prescribed Yogic practices.

Sūtra 2.45 gives the outcome of practice of Īśvarapranidhana as part of the Niyamas stated in Sūtra 2.32 – as that of attainment of the state of Samādhi.

Thus Īśvara in the context of Yogasūtras is centered around the practice of Īśvarapranidhana for all the levels of practitioners.

Chapter 4 – Verse 6 – ŚrīKṛṣṇa states – I, being the īśvara (governor/ruler) of the beings of the world, take control of the Prakṛti (the material substratum of the creation) and incarnate in this world.

Chapter 5 –Verse 29 – in the verse ŚrīKṛṣṇa wants Arjuna to know that the supreme conciousness is the receiver of all the Yajña-s and Tapas and is a friend of all beings. He is also the great īśvara (Maheśvara) – great ruler of the entire universe. On knowing the existence of a supreme being watching over us – one attains peace.

Chapter 9 verse 11 – ŚrīKṛṣṇa states that – people look at the human incarnation of me and disrespect me without knowing the higher divine nature of me being the ruler (īśvara) of all beings.

Chapter 10 – Verse 3 – In this verse śrīkṛṣṇa states that – without any delusions – the one who (with devotion) knows me as without beginning or end and as the lord of the worlds in, is freed from all sins.

Chapter 13 – In verse 22 – In the process of describing Kṣetrajña – ŚrīKṛṣṇa states that – the selfsame supreme consciousness which is the Maheśvara – great master/ruler/lord (of the universe) is also present in the body (of living beings here in the world). Verse 22 – in this verse it is stated that he alone sees who sees the Parameśvara (supreme being/lord) being equally present in all beings – immutably present among perishing/changing entities. Verse 28 continues the same idea of verse 22 of seeing the īśvara being present in all equally and states that a person who sees in this manner attains the ultimate state (of liberation).

Chapter 15 – Chapter 8 – Verse 5 states that the īśvara (master/lord) of thebody (the conciousness) while transmigrating from one body to the other carries the sense organs from the previous body just like the wind carrying the pollen from its source. Veres 17 – It is stated here that the Uttama-puruṣa is the supreme conciousness (Paramātman) – he permeates into all the three worlds, supports and governs (īśvara) them, while remaning indestructable.

Chapter 18 – Verse 43 – īśvara-bhava – nature of being able to govern is stated as natural trait of a kṣatriya/ a person of warrior class. Verse 61 – It is stated here that – īśvara – the lord is situated in the heart of every being and makes the beings move round and round (in their lives). Verse 75 – Sañjaya glorifies ŚrīKṛṣṇa as Yogeśvara here.He declares his great sense of awe on being able to listen to the conversation between ŚrīKṛṣṇa and Arjuna. Verse 78 – This is the final verse of the Gītā where again – Śrīkṛṣṇa is described as Yogeśvara. It is stated here that – wherever Yogeśvara Krishna is and wherever is Arjuna – prosperity, glory, opulence and steady policy and wisdom will abide in that place.

Thus as evident, the word īśvara is greatly respected and frequently used in different contexts of the Gītā.

There is just one reference to the Word Īśvara in this text. It is as follows –

It is stated here in that – the one who advises the practice of Mudrās in the traditional manner – is indeed the respected Guru, the lord and Īśvara (the almighty) himself. 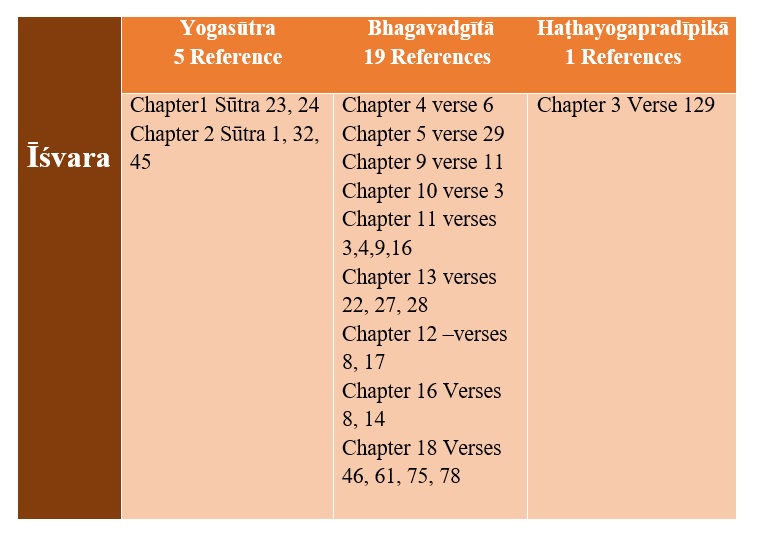 The grammatical derivation indicates that Īśvara is the master who governs. And the meaning is endorsed by the lexicon and the usage of the term in the context of Śiva is also shown in the lexicon. While the Yoga texts consulted do not use the term Īśvara in the meaning of Śiva – the other meaning as that of the lord, almighty and master has been profusely used in the Yoga literature consulted.

1) Yogasūtras: Īśvara is defined and the devotion to Īśvara is advised thrice in the text – towards the attainment of state of Samādhi and that too quickly.

2) Bhagavadgītā: a) ŚrīKṛṣṇa declares he is the incarnation of Īśvara. b) Further – there is repeated emphasis on the existence of Īśvara as the ruler/master of the universe – the supreme all pervasive consciousness. c) those who are devoted to such Īśvara is stated to attain peace and freedom from all sins. Those who deny the existence of the governing higher force are described as demonic. It is also stated that demonic people while denying Īśvara, declare themselves as Īśvara. d) It is very interesting to observe that – Īśvara is not merely described as all powerful creating, governing force of the universe, Īśvara is described as being present in the heart and each every being. The realization of this aspect is praised as the real realization. e) The term Īśvara is used in compound terms such a – Maheśvara, Yogeśvara, Parameśvara. f) Along with this – the capability to rule and govern people – Īśvara-bhava – is presented as a quality of a Kṣatriya. This meaning of the term is quite different from all the earlier contexts of discussion where Īśvara was connected to God.

3) Haṭha-yoga-pradīpikā: Unlike the two earlier Yoga texts, this text does not discuss elaborately about Īśvara as God, all powerful – while mentioning about the existence of such an entity on just one occasion, even that Īśvara is seen in the teacher of the Yogic practice of Mudrā.

Thus these are the insights and inputs on Īśvara and devotion to Īśvara in the Yogic context that emerged through the process of evaluation of the term through the Śabda-yoga methodology.