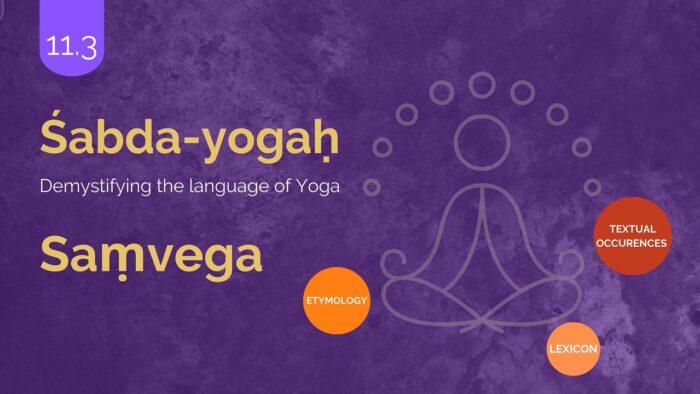 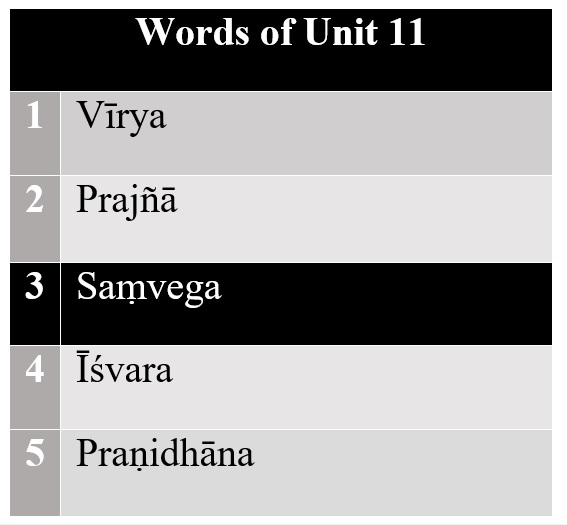 The words saṃvega and saṃbhrama are used to indicate some urgency and urge in action.

It is interesting to note that both the grammatical derivation and the lexicon reference match exactly in this case.

There is just one occurrence of the term in this text. It is as follows –

Those with intense samvega – (the attainment of Samādhi) is quicker.

The word Samvega has been given the following meanings in the SaṃskṛtaYogasūtra commentaries.

That firm subliminal impression that impels into action

Greatness in practice (of Yoga), unbroken continuity (of practice)

Practice of the methods (of Yoga) in an intense manner

Constancy in practice and strong desire (to attain Samādhi)

Thus it could be seen that – Greatness/intensity in practice, continuous practice, being dispassionate (in things other than Yogic practices) and very strong desire – constitute the meaning of the term Samvega.

This term is not found in the text, But the spirit (intensity in practice etc.) conveyed by the term is found in the both text – albeit in other terms.

It could be noted that the term is a unique to Yogasūtras, not be found in the other two Yoga texts. Even in the Yogasūtras the term appears just once.

It is interesting to note that the aspects of practice that are conveyed by Samvega through the commentaries have been enlisted in the Yogasūtras themselves – in the Sūtra (1.14) –

It is also worth noting that – according to one commentator Samvega indicates vairāgya – which is one among the twin practices indicated earlier in the Sūtra 1.12-

Thus it could be stated that the term Samvega – incorporates in itself both abhyāsa and vairagya.

Such is the uniqueness of the coinage that emerges from the study of the interoperations of the term Samvega in the Saṃskṛta commentaries.

This unique nature of the term comes to the fore only by approaching the term with the śabda-yoga methodology.