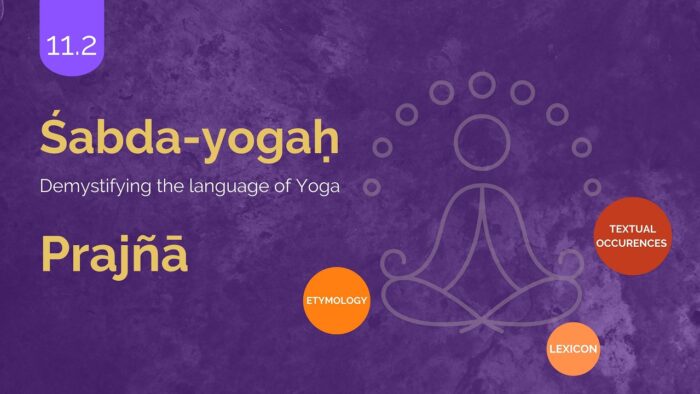 We will take up important Yogic terms from Sūtra-s 1. 20 – 23. The terms that will be analyzed in this Unit are – 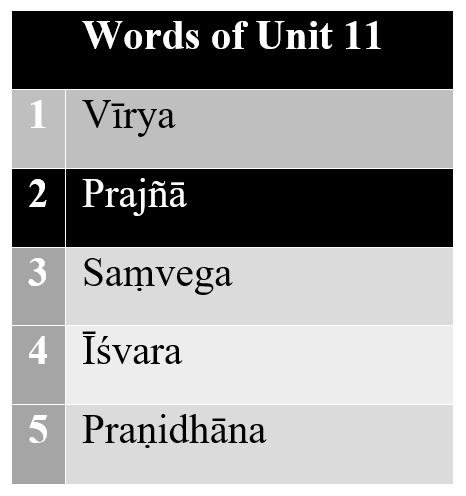 This word is made up of four components

There are two references in the Amarakoṣato this word.

prajñāprājñādhīmatī – indicate a lady who is intelligent

There are five references to this term in this text. A brief chapter wise discussion is as follows –

prajñā is stated as one of the Upāyas or tools for attaining the state of samprajñātaSamādhi.

After attaining excellence in the state of NirvicaraSamādhi – ṛtaṃbharāprajñā manifests.

Nāgojībhaṭṭavṛtti states Prajñā in this context as Sākṣātkāra – direct realization and Vyāsa clarifies the meaning of the term ṛtaṃbharā where he states – that it is a state of mind where there is not even an iota of wrong knowledge (तत्रविपर्यासगन्धोऽपिनास्तिtatraviparyāsagandho’pināsti). The pure knowledge of the Puruṣa is realized in that state.

In Sūtra 26 Vivekakhyāti is stated as Hānopāya – the means to reach the state of freedom from suffering. Vivekakhyāti is – very clear discriminatory knowledge (of Puruṣa and Prakṛti). This Sūtra states that the person who is endowed with the Vivekakhyāti attains realization (prajñā) in seven states. Prajñā in this Sūtra is described by Nagoji Bhatta as – योगजसाक्षात्काररूपिणी – yogajasākṣātkārarūpiṇī – a state of direct perception arising out of Yoga. This definition is not contradicted by any other commentator.

The principal commentator, Sage Vyāsa, qualifies this Prajñā as Samādhi-prajñā – a Prajñā – clear knowledge – that arises out of Samādhi. This prajñā is equated to ṚtambharāPrajñā (1.48) by Sadāśivabrahmendra – which does not have any contrary views from other commentators.

Thus these five references on Prajñā throws light on various dimensions of Prajñā in the context of Yogasūtra.

Arjuna is being castigated by Lord Kṛṣṇa. The following words of commentary from ĀcāryaŚaṅkara’s commentary clarifies the meaning of the term Prajñāvada- त्वंप्रज्ञावादान्प्रज्ञावतांबुद्धिमतांवादांश्चवचनानिचभाषसे –

(Oh Arjuna!) – you utter the words (vāda) of intelligent people (Prajñāvatāṃ). As implied by this – Arjuna speaks as if he is intelligent and his actions speak in the other manner. Here, then, Prajñā refers to intelligence.

In verse 2.54 Arjun asks Lord Kṛṣṇa about attaining the state of Sthita-prajñā (a steady state of intelligence/knowledge). The response that by Lord Krshna repeatedly contains the usage of the word Prajñā. The refrain “tasyaprajñāpratiṣṭhitā” – his intellect is established – is found in four verses except 2.67.

As could be observed from the verses – a firm unwavering mind is what described as sthita-prajñā.

2.57 – states that a person who is neither overjoyed due to attainment of desired or becomes filled with hatred on failing to attain the desired – attains steady mind.

2.58 – states that a person who withdraws his senses from their respective objects just like a tortoise withdrawing its limbs into the shell – will attain steady mind. 2.61 and 68 reiterate the same idea – as that of the control/mastery over the senses.

Verse 2.67 also indicates that the mind that follows the senses that wander loses its clarity and steadiness. In essence this verse also points to the need of control of the senses to attain a firm state of intelligence.

Haṭhayogapradīpikā – There are no references to the Prajñā in this text.

1) It could be observed from the etymology and grammatical derivation that – Prajñā can both mean – clear knowledge and person who is intelligent. But as could be seen from the Yogic textual occurrences – it is used in the sense of clear knowledge.

2) The meaning of Prajñā in the Yogasūtras – has various shades. In the order of greatness of meaning its meaning are as follows –

3) A unique expression – Prajñāvada – intellectualism – could be noted in the Gītā.

4) Stability of clear knowledge (Prajñā) is marred by mind that is led by the distracted senses and stability of intellectual clarity is achieved by withdrawal of the senses from their respective objects.

5). The very absence of discussion on Prajñā indicates the emphasis that Hathayoga literature lays on practice – centered on Asana, pranayama and Mudras. The fourth chapter of Hathayogapradeepika – that presents meditative practices like Nadanusandhana also is focused on the absorption or dissolution of the mind – rather than clarity or realization through the mind – that is conveyed through the term Prajñā in other Yogic texts.

Thus it could be noted that the term Prajñā has range of meanings and context consciousness is needed in interpreting the term. By the cross-sectional study of Yoga texts ways and means to have stability in the intellectual clarity also has emerged – which underlines the utility of Śabda-yoga methodology.