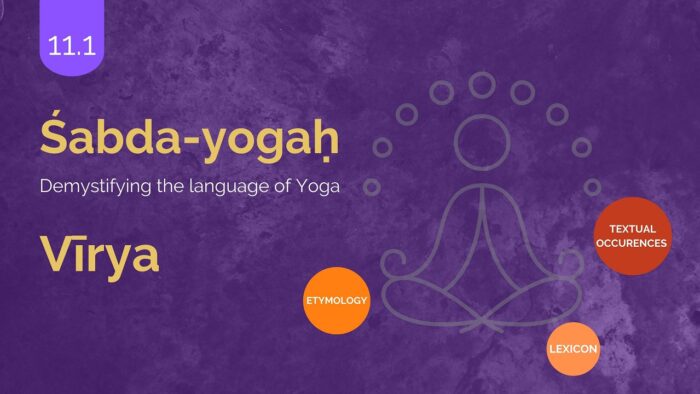 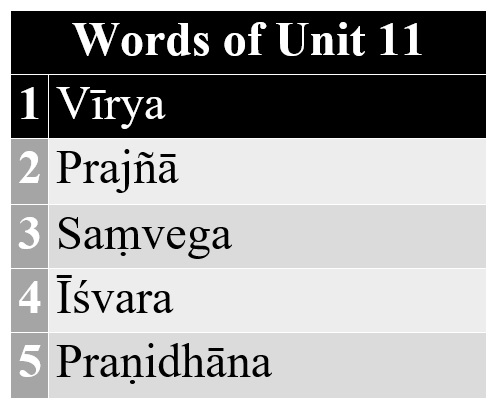 Vīrya is a word derived from a Noun.

The suffix is Yat.

The word vīra refers to a warrior or a brave person. The suffix yat is added to indicate the meaning tatrasadhu – capable/appropriate in that. This suffix is added based on the Grammatical rule तत्र साधुः (aṣṭādhyāyī4.4.98)

Hence the derivative statement would be – वीरे साधुवीर्यम् vīre sadhu vīryam – that – bravery or great energy and effort – which is appropriate in a soldier or a brave person.

There are 3 entries in Amarakośa on this term.

It could thus be seen, that three meanings – strength, prowess and semen are the meanings emerge from the lexicon.

There are two references to the term in this text.

This sūtra discusses the Upāya-pratyaya-samprajñāta-samādhi (that state of Samādhi which are attained with Upāyas – means). The Upāyas are listed in this Sūtra itself which are śraddhā, vīrya, smṛti, samādhi and prajñā. In this context the word Vīrya is described by classical commentators of the text as follows –

Thus, based on the traditional commentaries enthusiasm, effort and firm conviction to follow the practices of Yoga to attain Samādhi constitutes the meaning of the term Vīrya in this Sūtra.

Brahmacarya (non-indulgence in sensual activities) is part the five yamas that is the first limb of aṣṭāṅgaYoga. This Sūtra states that – on firmly following Brahmacharya – Vīrya is attained (Vīryalabha).  Most commentators beginning form VācaspatiMiśra– agree that the meaning of the term Vīrya in this context refers to Sāmarthya – capability. They go on to describe that the capability here refers to those capabilities that lead to perform extraordinary feats.

There are four references to the word Vīrya in this text. Two occurrences are in the first chapter and other two are in the eleventh chapter. A brief discussion on that is as follows –

In the verses of the first chapter the expression vīryavan is found – that describes various kings who have assembled for the Mahabharata war – and portrays them as – full of prowess (Vīryavan).

The next set of two references is from the 11th chapter where the Viśvarūpa – the cosmic form of Bhagavān is described. In both occasions – the lord is described as Anata-vīrya – the one who is endowed with endless prowess and capability.

It is interesting to note that – while the Kings mentioned in the first chapter have prowess (vīryavan) – the prowess or the capability of the Lord is limitless (Anatavīrya).

There is just one reference to the word in this text. It is as follows –

This verse states that the knowledge of Haṭha has to be maintained secretly (discretion has to be exercised before teaching). Only then it would be efficacious (vīryavati). Else it will be of no effect.

As evident two terms Vīryavatii and Nirvīrya – both derivations from the term Vīrya is seen here – which refers to – being efficacious and ineffective.

It could be observed that there are various shades of meanings that emerge for the term Vīrya based on the Grammatical derivations, lexical references and textual occurrences.

In conclusion – the various shades of meanings, various contexts of occurrences and the contrasts that emerge from juxtaposing the selfsame term in various contexts- makes the study of the term Vīrya in the Yogic context very interesting and enriching.