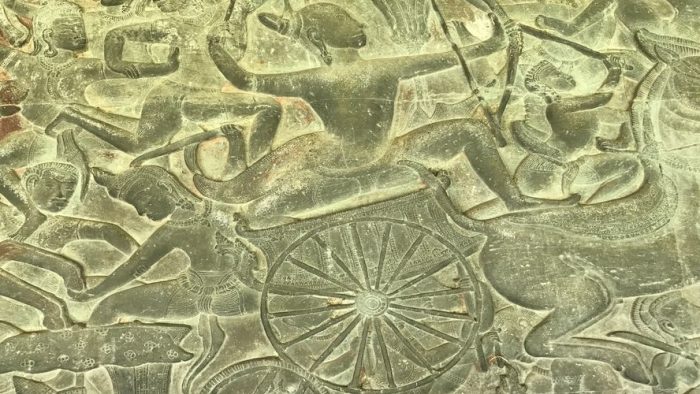 Read Part I and Part II.

In the second part of the series, we saw how the numbers pointed to the possibility that Bhishma attempted to stall the war while it was on. His fall was a milestone that took the battle of Kurukshetra to a next level. I say it is the next level because Dronacharya, the next commander of Duryodhana did not share his predecessor’s beliefs about the war.

Drona proved to be the ruthless warrior who looked to achieve two ends. One was achieving victory for Duryodhana and the other was taking out his anger upon the Panchalas. The valour of Drona and the terror he caused among the Pandava armies was legendary. His strategy also deserves a due deliberation.

Arjuna’s valour on day 10 of the war took Drona by surprise and he could not raise to the occasion. The Kuru preceptor who exactly knew the weaknesses of his students fighting on the other side had to accept the fact that Arjuna had surpassed his zone of predictability and as Krishna drove Arjuna’s chariot, it was near impossible to overwhelm him. Upon being anointed as the commander in chief, Drona promises Duryodhana that he would capture Yudhishtira alive. It was Duryodhana’s hope that capturing Yudhishtira would render the valour of his four brothers as well as supporters ineffective. But he added a caveat that this promise could not be kept up as long as Arjuna fought by Yudhishtira’s side. The solution was to separate Arjuna from the mainstream battle through a dedicated task force called Samshaptakas. Mostly comprising Trigarta warriors under Susharma’s command, this task force took an oath that they would challenge Arjuna and would not retreat until they killed him. Then on, the war took place on two fronts where Arjuna fought Samshaptakas on the side lines while Drona and others took on the rest of the Pandava warriors.

A quick glance at the numbers in Drona Parva

211 battles of the total 466 battles were fought during the five days under Drona’s command. The spread is steep between the Kaurava victories (43) and the Pandava victories (118). 50 battles were inconclusive. What caused the steep difference even when Drona was reputed to be unstoppable wherever he went? 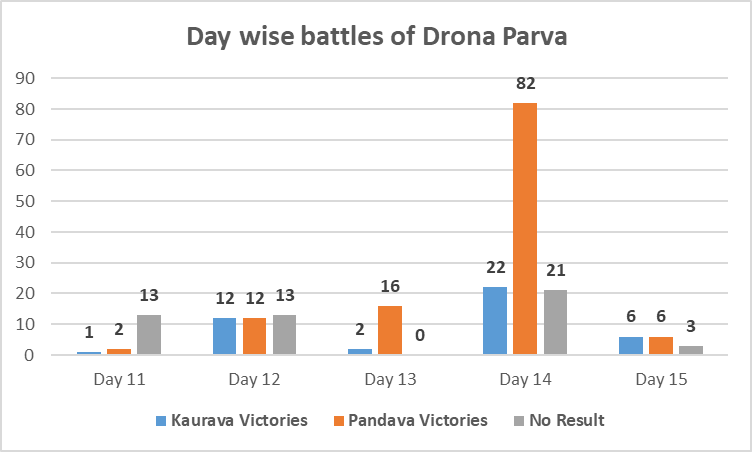 The battles evened out on Day 12 which was of mixed luck. In fact Day 12 was advantage Kaurava with Drona nearly succeeding in capturing Yudhishtira when Arjuna dashes into the main battle just in time, saving his elder brother. Despite the last minute frustration, it was the point when the tables started turning for the Kauravas. Drona was in form and Karna too was acquiring his after a surprisingly quiet Day 11. But Duryodhana’s frustration in the evening pushes Drona to take up a strategy that would cost Kauravas their victory

The notorious story of Abhimanyu being trapped inside the Chakravyuha often brings us the heart breaking image of the wounded sixteen year old wielding a chariot wheel as his weapon after being attacked cumulatively by six Maharathas. Before we examine Abhimanyu’s valour, it is important to remember that cumulative battles were not rare in the Mahabharata war. Multiple warriors attacking a single warrior happened right from Day 3 and continued till the end. It often happened because the single warrior on the other side would be proving a handful and often it happened that the single warrior prevailed over his combined enemy. The same happened with Abhimanyu many times over when he was fighting in the Chakravyuha. But unlike other cases, Abhimanyu was cut off from any external support and his slow but painful fall and final death evokes strong emotions. But heart aside, numbers tell a different story.

In other words, whole of Kaurava warriors and armies were kept busy dealing with two warriors, Abhimanyu and Arjuna. While the Pandava warriors were defeated by Jayadrata single handedly, it is safe to conclude that they were rested from facing the wrath of Drona on Day 13. Something that terrorised them on the day before. Had Drona let Abhimanyu go and rallied the armies again to go behind Yudhishtira instead, the story may have been different. But Abhimanyu’s killing of Lakshmana made Duryodhana so angry that he called for Abhimanyu’s death at any cost. The cost was his overall victory.

With the Pandava camp physically rested and mentally baying for revenge, came the bloodiest day of the war, the fourteenth day that practically dragged Arjuna back to the main front. Taking an oath that he would either kill Jayadrata (who was instrumental in cutting Abhimanyu off rescue) or enter fire himself, Arjuna penetrates the Triple Vyuha in pursuit of Jayadrata, ploughing through the whole of Kuru armies. Bhima and Satyaki go to check on him during the latter part of the day.

The night battle follows after Jayadrata’s death which proves to be another strategic mistake by Drona. Duryodhana’s continuous rants about his sincerity could have got under Drona’s skin and that could have made him persist with the night battle despite the soldiers on both sides being tired with the day’s battle. The Quantitative highlights of the night battle:

The soldiers on both sides are so fatigued by the last quarter of the night that when Arjuna suggests that they take a break and sleep till moonrise, every soldier in both camps blesses Arjuna in his heart.

Understandably , neither the camp is ready for the next day’s battle and Drona begins to gain by killing Virata and Drupada early in the morning and begins to terrorise the soldiers and realising he Pandava warriors are not in the best of their forms, Krishna suggests that it is time to kill Drona even if it means using deceit and in this case, it is Yudhishtira lying to him that his son, Ashvatthama is dead, thus demotivating Drona to continue fighting. (The onus falls upon Yudhishtira as Arjuna refuses to utter a lie).

Drishtadyumna beheads Drona while the latter was unarmed much against Arjuna’s wishes. The act exposes the whole of Pandava army to the wrath of Ashvatthama who uses Narayana Astra, but thanks to Krishna’s counsel, they manage the outwit the Astra as well as its user and the last day of Drona Parva ends with Kauravas withdrawing.

In conclusion, Drona shone in his individual performance. He single handedly killed almost all the allied kings on the Pandava side like Drishtaketu, Sahadeva (Magadha), Virata, Drupada and a host of Panchala princes and caused a deep dent in the enemy. 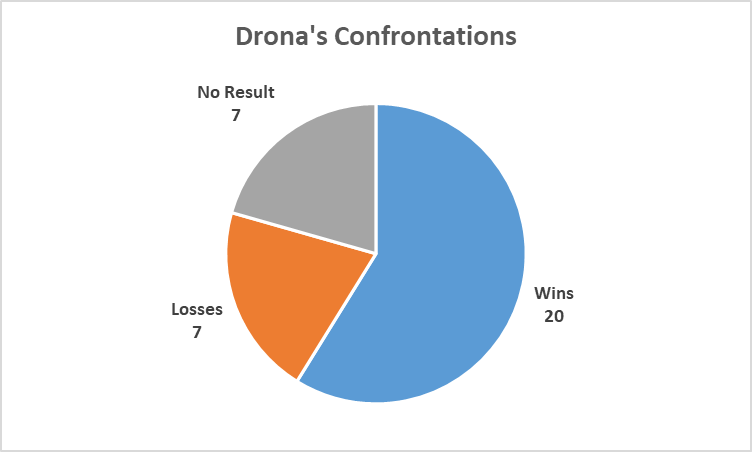 At the same time, something in his style of fighting also inspired the best of his enemies too. Pandavas found the raw valour within each of them unleashed and they had to strain it to the maximum to withstand him and that in turn caused a deeper dent on the Kaurava side. 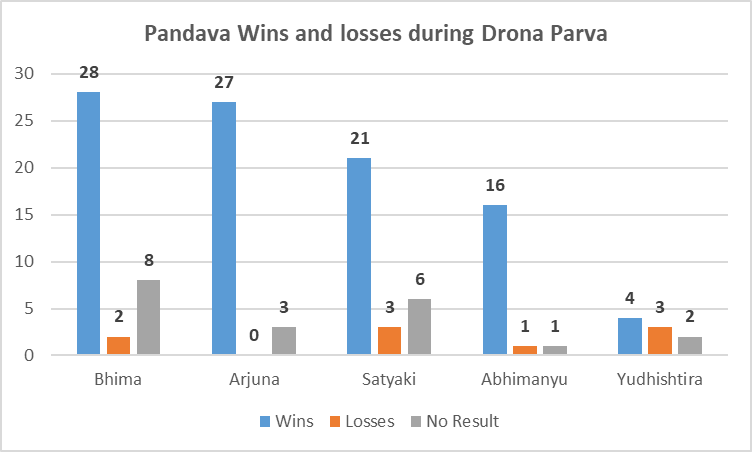 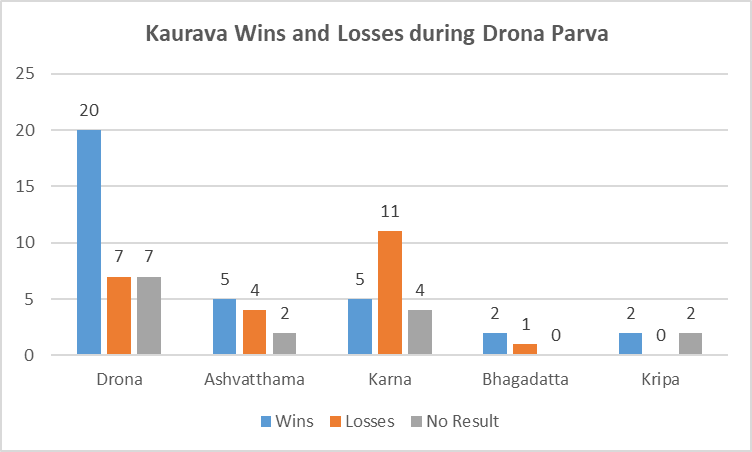 Barring Ashvatthama and Karna, Drona could not inspire warriors on his side including Kripa, Kritavarma, Bhurishrava, etc to give their best and aggress like Bhima, Arjuna and Satyaki did. If it is the case of a warrior’s ego clashing with a leader’s wisdom is something for the students of Mahabharata to study and deliberate.