Conversation with Amish Tripathi “Legend of Suheldev: The King Who Saved India” 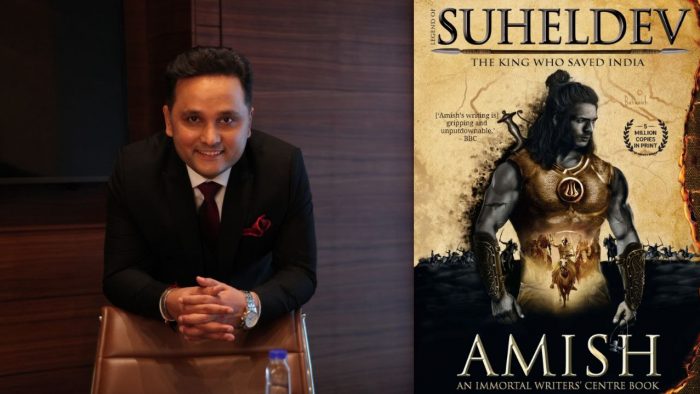 Congratulations upon the launch of your book Amish Ji. Legend of Suheldev was a wonderful read.

The book begins with the desecration of Somnath Jyotirlinga which seems to be an unfortunate incident that repeated with every invader. What motivated such monstrosity on their part?

The medieval Turkic tribes of Central Asia were truly a barbaric people; they were the most brutal warrior race the world has ever witnessed. They destroyed many parts of the world, not just India. The Turks believed in aggressively expanding their empire for wealth and the spoils of war. They also had their own extremist interpretation of Islam.

They believed it allowed them to destroy temples, burn universities to the ground, kill “infidels” (which didn’t just include non-Muslims, but even those Muslims they thought were not “pure” enough) in the millions, and rape/enslave women. They did all this, and proudly recorded their acts in their own texts. Truly among the most despicable invaders the world has ever seen. Far worse than the Nazis.

In the 11th century CE, it did not seem like the invader armies had a lot of technological advantage over Indian armies. What gave them their initial victories and vantage points that led to desecrations of temples in the frontier areas?

You have to realise that over time, the Turks did develop technical kills, or rather used the technological capabilities that they learned from other kingdoms. For example, they were among the best users of gunpowder as a means of warfare. Gunpowder was known to India and China too, but it wasn’t used as well in warfare by them.

However, it’s not just the technological capabilities. There is also a fact that the Turkic men were bred for war, they were raised from childhood primarily for one thing alone: the art of killing. They were trained to be ruthless. They were very good riders. They could shoot exceptionally well from horseback. So, it is a combination of these things and their utter brutality against enemies, to an extent rarely seen before, that gave them a definite advantage in battle.

The Turks were quite a barbaric tribe, their aggressive nature gave them enormous arm strength to fight. In combat, they had no rules, no war etiquettes like those possessed by Rajputs of India.

Yes, that is true. That is the debate that King Suheldev has. When you’re fighting an enemy like this, how should you fight? He believed in Lord Krishna’s approach, rather than Lord Ram’s approach. Shathe shathyam samacharet. So, King Suheldev says that if you are fighting brutal ruthless enemies who follow none of the codes of chivalry and rules of war, then you have to fight them in a manner that they understand.

That is, you must be as ruthless as them. That’s the only way you can win. King Suheldev says that a warrior must protect those who depend on him for their protection; and if in doing that, he has to sacrifice his own soul by breaking the rules of war, then he should do it.

Share more about the alliance forged between small-time kings and warlords that was led by Suheldev. Why did greater dynasties with bigger armies fail and how did this collaboration under Suheldev differ from their predecessors?

A large part of winning a war is based on many things before the fighting even begins, such as the preparations, your supply lines, your leadership, the training of the soldiers. In ancient times, the layout of the battleground, and the arrangement of the army on it, also used to play a massive role.

So many factors would count, but I think the key in King Suheldev’s victory was his leadership. He was able to forge an alliance together with so many groups and tribes, and it is a testament to his leadership skills and that is something we can truly learn from him. King Suheldev wasn’t fighting for his personal glory, he was fighting for the land and his people.

The curricular history that we studied in school, has somehow succeeded in highlighting the defeats of India but has unfortunately eclipsed such successful subaltern resistances against invasions. Why do you think it has happened? Why are we taught a Delhi-centred-invader-centric history?

I think there can be various reasons for this. The biases of our establishment historians who were themselves Delhi-centric, so I guess they thought that the world revolved around where they lived. The second thing, which will also shock you, is that some of our key establishment historians don’t know our ancient languages (like Sanskrit) well and our ancient scripts.

So, they wrote their history books based on translations of the primary sources, rather than from the original texts themselves. This is as ridiculous as someone writing the seminal history books of France, without knowing French well. Therefore, the shortcomings in our history books comes partly from their personal biases, and partly their lack of Indic capabilities since they were so heavily anglicised.

I found the mention of Rajendra Chola very interesting. What moved a down south king to play such an active role while most of the close neighbourhood kings gave into the Turkic threats or bribes?

King Rajendra Chola was a very devout Lord Shiva worshipper. Just see the temples built by the Cholas to see the evidence of that. There’s a painting in one of the temples where Lord Shiva is shown on the throne and Emperor Chola as one of the attendants. So he was that much of a devotee. Secondly, Rajendra Chola had conquered all of South India, most of East India, all of Sri Lanka, and most of South East Asia.

So he was the greatest conqueror of his time. And he was the most powerful man in the world at the time. I assume that he would have done something to avenge the desecration of the Somnath ji temple. And I have used this assumption in my story. Of course, I have clarified many times that I am not a scholar; I am only a storyteller. So, this is only my interpretation. The facts will have to be studied by scholars.

A lot of care has been taken in the book in differentiating the valour of an Indian Muslim from the barbarism of Turkic invaders. What contributes to the rootedness of the Indian Muslim?

I think there is something in the soil of Mother India. The way all of us approach religion itself. It’s only in India where you will find examples of Venkateswara Swamy Temple where Muslims go and pray (during the Ugadi festival). There are pictures of women in Burkhas, who come to the temple to pray. Or consider the Manganiar Muslims of Rajasthan, who are Muslims by faith but their vocation is singing devotional ballads of Lord Ram.

A brilliant archaeologist like KK Mohammad, who is a Muslim by faith, but is one of the most important contributors to building a case that there was a temple of Lord Ram in Ayodhya. The wonderful attitude in most Indian Muslim is reflected by this line I had been told once: We may have changed our religion, but we haven’t changed our ancestors. I believe that all of us Indians are one people and we will only be strong when all the 1.39 billion of us are united.

How does the study of true history impact a young mind of the twenty-first century?

I think it is extremely important. History is essentially connecting the living to the dead for the benefit of the unborn. Unless we have strong roots which give us strength and purpose, how will we build a better future? History defines who we are, how we see ourselves, which is why it is such an important subject.

As a very passionate storyteller yourself, how did you find co-authoring Suheldev? Also share more about The Immortal Writers Centre, its vision and functioning

I have too many story ideas for one lifetime and one of my biggest fears is that I will die before I finish all my story ideas. The idea for the Immortal Writer’s Centre came from my team. It is a process that has been tried in the West, but never been tried before in India. The idea is very simple. We have hired a few published writers. I make a story summary, also consisting of the main characters, research to be done etc. that I communicate to the team.

Then, either a team or an individual, expands it into the first draft of the manuscript. Then I work on it and finalise the second draft of the manuscript. That’s how the process works. This allows me to expand my capacity. I can now get many more books out there since I get to work on multiple books simultaneously. This will ensure that I publish all my story ideas before I die! And we make sure that the readers are clear that this is not my sole book, but part of a team effort, by mentioning the Writers Centre on the cover.