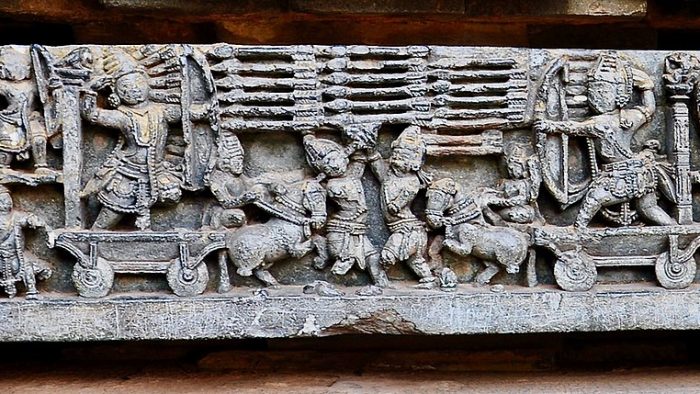 The outcome of Drona Parva would convince a student of Mahabharata that the war was won by the Pandavas on Day 14. The following days are only a formality that required the killing of the remaining Kauvara Maharathas. The succeeding commander of the Kaurava armies – Karna, though defanged by the loss of Vasavi Shakti, managed to punch above his weight. On the Pandava side, we find only Bhima and Arjuna free of fatigue while the heavy contributors like Satyaki have begun to tire out from the long-drawn battle. Karna Parva, sheds a lot of light on the psychology of warriors on each side. One can sense the weight of 15 day long battle (be it frustration or fatigue or a determination to take it to the end at whatever cost) come down on each of them and it reflects on conversations between Shalya and Karna, and that between Yudhishtira and Arjuna and the less popular exchange between Bhima and his charioteer Vishoka. With only two days of battle, the focus goes more into detail than into numbers. But still, there are insights that numbers don’t fail to give.

Quickly getting into numbers 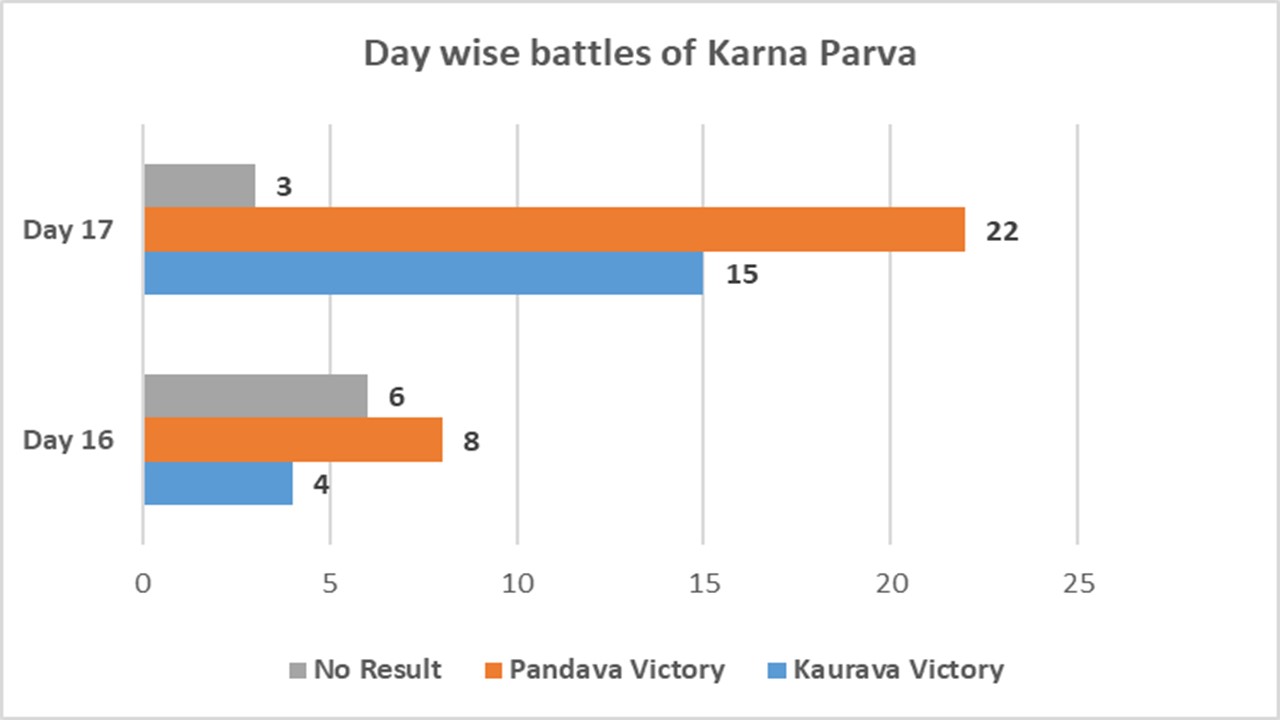 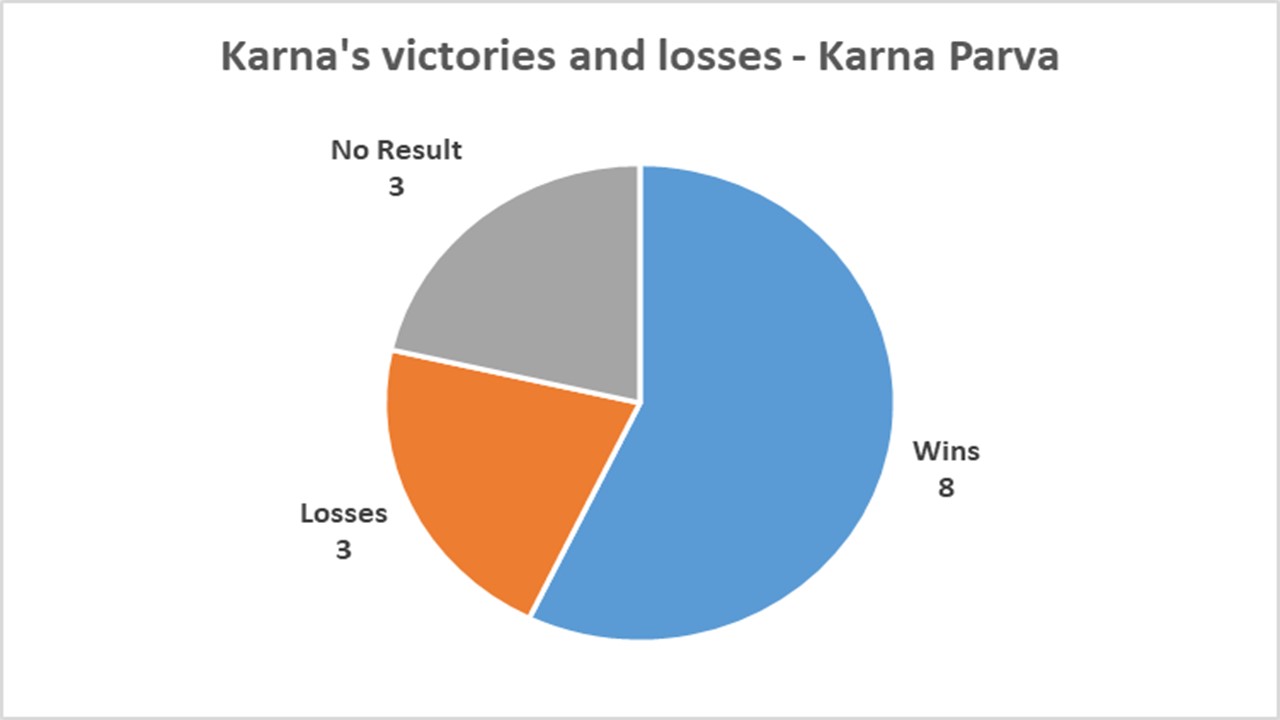 Day 15 of the war ended with Drona’s killing by Drishtadyumna after the former could not recollect his Divyastras due to grief when he was told a lie about Ashvatthama’s death. Karna was made the next commander of the Kaurava army upon the suggestion of Ashvatthama. While both sides suffered heavy losses in the past 15 days, it can be guessed that the morale of the Kaurava armies was lesser in comparison for they realised that the Pandava side would now not stop at anything to secure victory. The Pandava side on the other hand had their use of deceit linked to some loved person like Abhimanyu or Ghatotkacha and the armies were maintaining a higher morale, especially after Ashvatthama’s Narayanastra was baffled by Krishna. It was in these circumstances that Karna assumed command of the Kaurava armies.

Here is a comparison of Karna’s performance during Drona’s and Karna’s commands. 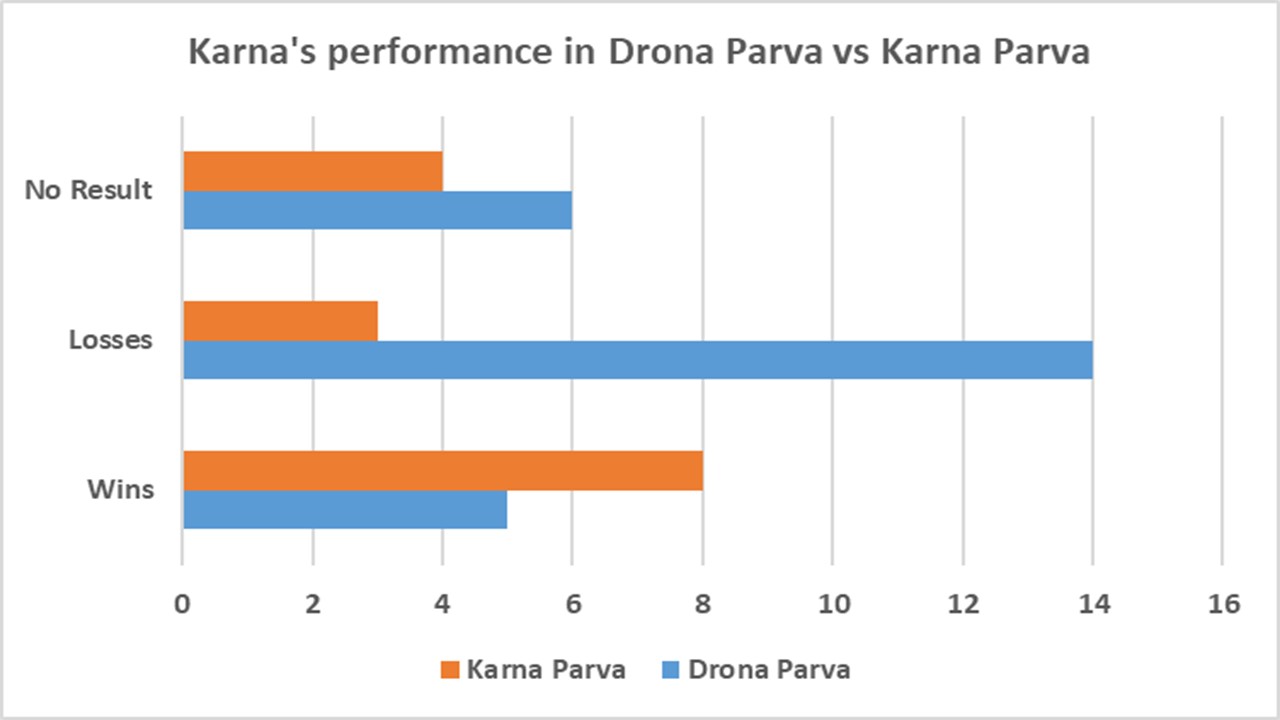 In the previous piece, we understand that Drona was focussed on capturing Yudhishtira and hence would always be on the fore, in his aggressive form. The onus of organising the rest of the battle usually fell upon Duryodhana’s shoulders and the combination did not work in favour of Karna w.r.t numbers. Karna’s own obsession to defeat Bhima cost him by 5 or 6 defeats in Bhima’s hands where he needed brothers of Duryodhana to sacrifice themselves in order to save him before he finally prevailed over Bhima. Probably he was free of his word to Kunti about Bhima and Nakula by the time he assumed command and that could have enabled Karna to focus on the battle instead.

While Day 16 did not have noteworthy highlights except for Ashvatthama killing the Pandya Prince Malayadhvaja and deaths of some minor warriors on the Kaurava side (Princes of Abhisara and Vinda and Anuvinda of Kekaya).

It was on Day 17 that Karna takes a risky decision of taking Shalya off the field to make him his charioteer. The King of Madra starts off on a bitter note, with some uncharitable words about Karna’s valour and Karna is also not the one to take it in a light spirit. Argument ensues between them with Karna first bragging about him defeating Arjuna and Shalya telling him not to underestimate Arjuna. It also veers upon some key differences between the Gangetic civilisation and the Kekaya Madra civilisation. In Karna’s reprimand of Shalya and his people, we are given a bird’s eye view of a kingdom where women enjoy more liberty and priests performing rituals for lower caste people. Something which Karna feels as detesting which comes as a surprise for we would expect someone like him of all the people to be more open minded about the caste lines. Perhaps, it is a real picture of the status of Sutas in the world of Mahabharata. In Karna’s speech to Shalya, the reader would get an idea that Sutas are actually nobility and even they considered the Shudra caste to be lower as to not have adhikara for rituals.

But as the day progressed, Shalya’s charioteering seemed to have worked to Karna’s advantage as his victories zoomed. Karna manages to defeat Yudhishtira and spare him after insulting the eldest Pandava. He is immediately attacked by an angry Bhima whose furious onslaught makes Karna faint. Shalya is quick to steer Karna away. In some regional rescenscions, it is said that Bhima was about to cut off Karna’s tongue for the words he spoke against Yudhishtira but was requested by Shalya to back off, respecting Arjuna’s pledge to kill Karna. After recovering from his faint, Karna is seen to prevail in many of his duels and general battles including those against Satyaki, Bhima and Drishtadyumna.

Karna’s domination draws Arjuna’s attention and he ploughs through the Samshaptakas to reach the main battle front. Ashvatthama tries to stop Arjuna’s progress to tire him out but Arjuna prevails and spares the preceptor’s son. It was then that Krishna and Arjuna see Karna invoking Bhargavastra against the soldiers of Pandava side – A practice that Drona is supposed to have resorted to. Arjuna feels it wise to let Karna tire out before attacking him and Krishna agrees. They also go back to the camp to enquire about the wellness of Yudhishtira who is not very happy to see Arjuna return without killing Karna. We would remember that Yudhishtira’s anger against Karna started the day Abhimanyu killed and upon Ghatotkacha’s death he is seen commenting that if Arjuna had killed Karna instead of Jayadrata, they would have had Ghatotkacha alive. Finally, his defeat and insult in the hands of Karna was the last straw and Yudhishtira gives his brother an ultimatum that he would enter fire if Arjuna returned without killing Karna that day.

Upon Arjuna’s return, Karna who had been on a dominating spree, realises that the tables are about to turn and calls for a regrouping of the Kaurava warriors to impede Arjuna’s progress before they meet for a duel. In the meanwhile, Karna could do nothing as he witnessed Duhshasana’s gory killing in the hands of Bhima and was undone at the very sight. Shalya’s encouraging words motivate Karna back to battle and finally, Karna goes to meet Arjuna, each of them protected by their friends and relatives. The first casualty in the confrontation is Vrishasena, the eldest son of Karna after a brief display of valour. Arjuna then meets his supposed nemesis for the final battle. It escalates into exchange of Divyastras between both. A vital advice by Shalya to aim the Nagastra at Arjuna’s heart instead of neck is not heeded by Karna and Krishna intervenes by pressing the chariot down, saving Arjuna. Then destiny comes to pay its due for Karna’s go-hatya when his chariot wheel sinks in a marshy patch of Kurukshetra. His bid to buy time by rescuing the chariot wheel instead of acquiring a new chariot draws Krishna’s ire and Karna is forced to take up the bow. Despite the guru’s curse coming to effect, Karna manages to remember a couple of Divyastras including Vaaruna and Brahma Astras before Arjuna’s arrow beheads him.

Death of Karna marks an end to a painfilled story of a spirited warrior, a tragic prisoner of his own complexes, hatred and Karma whose internal conflicts were more intense than external. Taking the right lessons of Karna’s rise and fall would be a true way of honouring his life rather than engaging in pointless sob fantasies of him being an underdog achiever which he wasn’t.