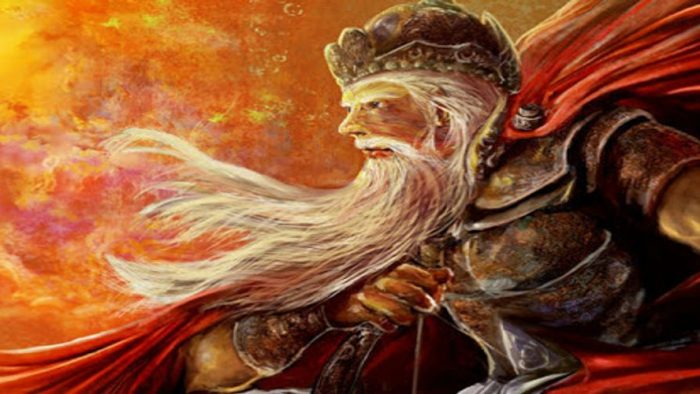 Bhishma Parva comprises the phase of Kurukshetra war where the Kauravas fought under the leadership of Pitamaha Bhishma. His commandeering lasted for 10 days. Clearly torn between his love for Pandavas and his duty towards the throne of Hastinapura, Bhishma’s participation is a heart-rending example of a reluctant warrior and yet a committed general. A glance at the numbers during Bhishma Parva: 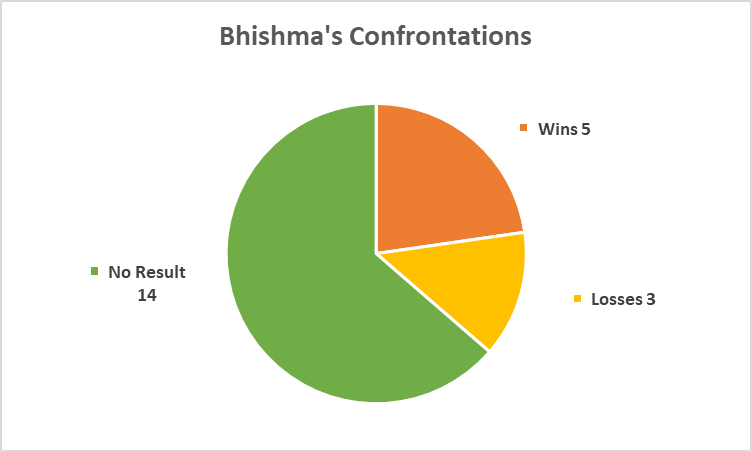 In his unwillingness to kill his own grandnephews, the sons of Pandu, Bhishma largely stuck to destroying the Pandava armies. Something in which he was mostly unstoppable and the Pandava warriors could only respond by destroying the Kuru armies in turn.

But there were days where the Kaurava camp had its gloomy luck under Bhishma. Duryodhana lost many of his brothers in Bhima’s hands. His elephant division had suffered a significant damage. Abhimanyu who did not share his father’s soft corner for the Kuru elders and Satyaki who was spiritedly for the Pandava victory registered a significant number of victories. His brothers, the sons of Draupadi, Ghatotkacha and Iravan managed to frustrate the Kauravas and registered crucial victories. (Iravan though, dies in the hands of Alambusha on day 8 after he kills 5 of Shakuni’s brothers in a bloodied cumulative attack that feels like a chilling prelude to Abhimanyu’s death). 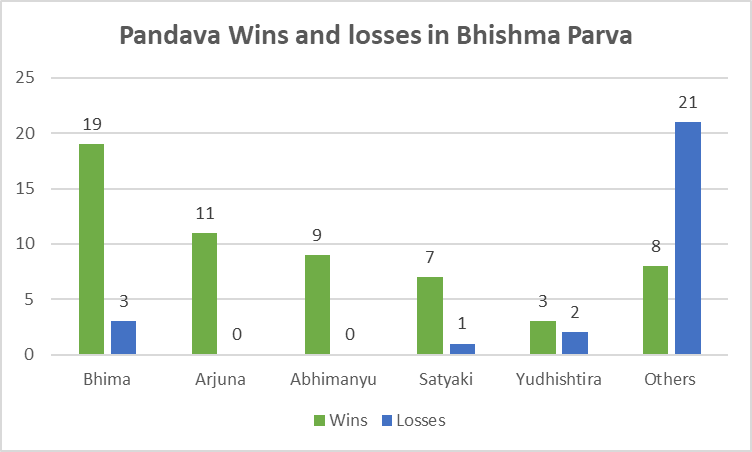 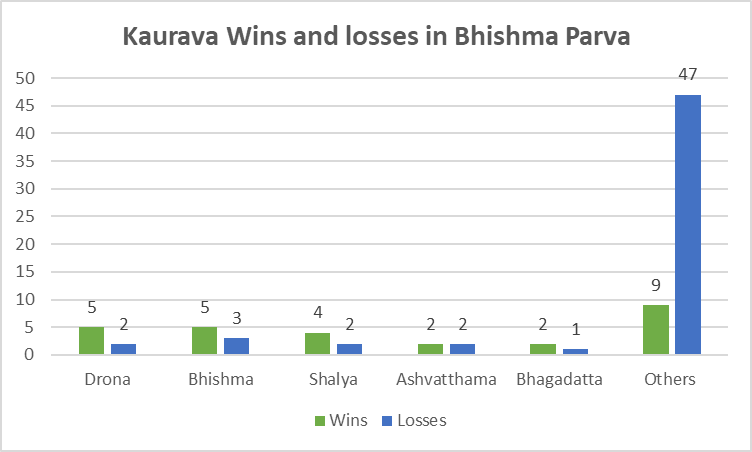 Luck, victory, loss, jubilation and gloom shuttled between the warring camps each day and Duryodhana often whimpered about how Bhishma could have easily killed the Pandavas and ensured victory but was unwilling to do so. Bhishma would often chide him back and say even gods could not win against the Pandavas and he himself kept away from harming them. Bhishma did do everything under his power to protect Duryodhana but had to see quite some brothers of Duryodhana slaughtered in the hands of Bhima and taste a loss in the hands of Bhima himself twice.

Whether it was his age catching up or if he was a Pandava Pakshapati as Duryodhana alleged, can be debated. But going by Bhishma’s record during the rest of his life, his commitment to the throne of Hastinapura was beyond doubt. So would be his valour, given that he was the man who even overwhelmed Parashurama in his youth. Pages and pages are described about how he slew thousands of warriors fighting on the Pandava side. The critical edition mentions that he resolved to claim at least ten thousand lives on the battle field and he even crossed the number occasionally.

The Other Side of Bhishma

The quantitative study might hint at the other side of Bhishma. Even as he stood tall in defence of Duryodhana in war, he took every opportunity to advise him to make peace with the Pandavas. He reiterated that the Pandavas, especially Arjuna could not be overcome even by the gods. He hoped against hope to put an end to the dance of destruction raging on the field if Duryodhana realised his fallibility. As usual, his advice fell on deaf ears where Duryodhana even blamed him for keeping Karna out of the battle.

The contrasting numbers and personality points to Bhishma’s aversion to war and his commitment to stopping it while keeping up his commitment of protecting Duryodhana. He was a soldier who knew the cost of war, without any personal scores to settle against anyone. Perhaps this is the reason we see that aggression of Drona’s nature was missing in Bhishma. His hopes of stopping the war were probably busted on Day 8 when Duryodhana’s ranting reached a new peak, at which he resolved to aggress and take the game to the finish line. Krishna seemed to realise the change in Bhishma and was ready to even break his own oath to kill the grandsire when he saw Arjuna’s intent wavering. Bhishma was a moral block to Arjuna’s true valour.

Perhaps in his wisdom, Krishna would have divined that under Bhishma’s leadership, the common soldiers on both sides would bear the most of the brunt and the lead warriors needed to unleash their best to speed towards a quicker conclusion, before the soldiers lost faith in their lead Maharathis. Bhishma too seemed to have realised this when he finally advises Arjuna to keep Shikhandi ahead while fighting him the following day and put an end to his predicament. (This is a repetition of the advice he gives Yudhishtira on day one itself.) Bhishma does not fight when he faces Shikhandi owing to the latter being a woman who turned into a man.

The battle of the tenth day is a spectacular one as Arjuna puts forth his best self, keeping the Kaurava host from harming Shikhandi while the latter approaches Bhishma. The Kaurava warriors of course do their best to way lay Shikhandi and the Pandavas on the other hand are determined to keep him in the lead. The battle of the day is very concentrated at the centre though there are mentions of about 20-22 confrontations, mostly individual duels on the side lines. It takes Arjuna his best to protect Shikhandi and he fights two cumulative battles single handedly baffling Bhagadatta, Kripa, Shalya, Drona, Kritavarma, Duhshasana and other brothers of Duryodhana.

Bhishma too is in the best of his game on his last day, killing ten thousand horses, elephants and two hundred thousand foot soldiers. He still does try to avoid Shikhandi, but attacks Arjuna with all his might and when his bow is broken, even takes on a sword and a shield. It would have been a heart-breaking scene to see a wounded veteran fighting on the ground had Arjuna not broken the sword and shield before Bhishma could descend from his chariot.

As the grand patriarch falls, Drona is said to have fainted instead of rising to the occasion, at Arjuna’s feat. This, we shall see in the following essays, forms a key reason behind Drona’s strategies when he assumes the responsibilities of commandership.

The grandsire’s ability to summon death helps him stay alive till the Uttarayana before which he also sees Yudhishtira coronated and the empire once again in safe hands.

In my next essay, we shall see Drona’s strategizing that shifts the magnitude of destruction in the war to a different level.