Book Review of 10 Judgements That Changed India by Zia Mody 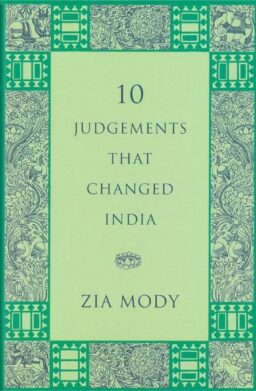 Even by the standards of non-fiction, this is an atypical book. Not only is the topic daunting, but the very subject is yawn-inducing. Most of us have plodded through school dreading the “civics” classes. Why would one want to revisit those times, unless one is a lawyer, or related to the legal subject?

Thankfully, Zia Mody not only presents a necessary, and critical topic before us, she also makes it an interesting read. A treatise on key judgements is a chronicle of India’s journey along the path of democracy and civil rights, and therefore, this is an important book.

Zia Mody is the founder of AZB & Co., one of India’s leading (and largest) law firms and comes from a family of legal luminaries (former Attorney General Soli Sorabjee is her father). There couldn’t have been one better qualified for writing the book.

The very task of such a book is daunting: undoubtedly the courts of India have pronounced judgements profound in impact and to narrow the choice to 10, is next to impossible. While most of the cases are so noteworthy that they have to be there (Kesavananda Bharati vs. the State of Kerala, for instance), others not so.

Some have had a direct impact on the life of the common man (Mohammed Ahmed Khan vs. Shah Bano Begum, or Vishakha and other vs. the State of Rajasthan) while others had a wider sweep but not a visible impact on the common man (Supreme Court Advocates-on Record Association vs. Union of India, popularly known as the Second Judges Case).

Undoubtedly, in a legal context, cases relating to a) fundamental rights and b) structure of the constitution would be the ones having a lasting impact. Invariably, these are also heard by the Supreme Court and more often than not, a multiple judge bench.

It is no surprise then, that the 10 cases covered by the book are those that relate to fundamental rights and/or structure of the constitution. This also means that sensational cases and those that received widespread publicity (such as K.M.Nanavati vs. the State of Maharashtra, the last case in India to be put to a jury trial or Indira Gandhi vs. Raj Narain, the case where the Allahabad Court ruled Indira Gandhi’s election null and void – an event that triggered the declaration of emergency or Madhav Jiwaji Rao Scindia vs. Union of India, against the Government’s decision to abolish titles, privileges and privy purses) do not find a place in the book.

The judiciary, on the other hand, notwithstanding criticisms on the massive backlog of cases etc., has managed to retain a larger degree of independence from the legislature and time and again, reminds the powers that be of its stature and importance.

It is time that a glimpse of the seminal work done by the judiciary, and the Supreme Court in particular, in safeguarding democracy is understood and appreciated by a wider audience. This book does a commendable job towards that end.

Since the book is meant for the non-legal reader, the author has structured the material one chapter for each case to make for easy reading. Each chapter begins with the background of the topic of the relevant case. This is followed by a brief discussion of earlier cases that provided a run-up to the case being discussed.

For instance, Golaknath vs. State of Punjab had set the precedent (on the right of the state to restrict or supersede right to property), a decision that the Kesavananda Bharati case overturned. In addition, the judges in the Kesavananda Bharati case also laid down the “basic structures doctrine” that forms the basis for the judiciary to review, and strike down if necessary, any amendments to the Constitution that conflict with or alter the basic structure of the Constitution.

It was a seminal judgement in that sense. Similarly, the First Judges Case (S.P.Gupta vs. Union of India) was the precursor to the Second Judges case where again, the Supreme Court took a divergent stand regarding the appointment, promotion, transfer of judges of the Supreme Court and the High Court.

Though this judgement has been criticised for tilting the balance of power way too much in favour of the judiciary, the counter-view is that this was necessary to maintain the independence of the judiciary.

Significantly, the Supreme Court in 2015 struck down the 99th amendment to the Constitution and the National Judicial Appointments Commission (NJAC) Act [passed in August 2014], restoring the collegium system of judicial appointments that started with the ruling in the Second Judges Case.

The author takes a candid view and does not dither from pointing out shortcomings of judgements where appropriate. Each case is followed by a brief discussion on the aftermath of the case.

This is an important discussion, and one of the primary reasons why a reader should pick up the book. Each of these cases has had far-reaching implications. The first case discussed, for instance, resulted in the abolition of one of the fundamental rights – the right to property.

Another case paved the way for laws and guidelines on workplace harassment. The subject matter is presented devoid of legal jargon. Where legal terminology is necessary, it is explained in a footnote; even common terms such as locus standi are explained for the lay reader.

While most of the cases are well described, in a couple of instances (specifically Union Carbide vs. Union of India, Indra Sawhney vs. Union of India), the discussion gets into a rant on the societal and political state of affairs.

While the sentiment is well appreciated, the expectation from a book of this nature (in these specific instances) is an explanation of why the case is important and what changes did it lead to. But for these exceptions, the rest of the cases live up to the title and the expectation.

The only complaint is that the discussion on each case is limited to 18 – 20 pages, which is probably by design, though for readers looking for greater depth and commentary, it is more like a teaser.

True, one could look up these cases (and commentaries and critiques) online, but then, they wouldn’t be written with the legally-illiterate reader in mind! I also wish that the book covered at least the top 20 cases, but then again, that might have made the book unwieldy.

A closing note on the cover design. For a “legal” book, the look is very non-intimidating and at first sight, unconventional, with a bright bluish-green cover.

On close inspection, it reveals a bull, an elephant, a horse and a lion in each corner (corresponding with the pedestal of the Indian Emblem) with peacocks adorning the long edges. A fitting cover, celebrating the Republic of India and the Constitution of India.

Apparently, writing this book so drained the author that she is not planning another in the near future. And this from a corporate lawyer who has worked punishing hours for the better part of her long career, handling pressure cooker situations. That provides a clue to the depth of research, thought and effort that has gone into this book. A definite must-read.

Overall, a very readable book that reiterates the importance of the judiciary in the Indian context and the role that the judiciary plays. Strongly recommended.

10 Judgements that changed India is available on Amazon.