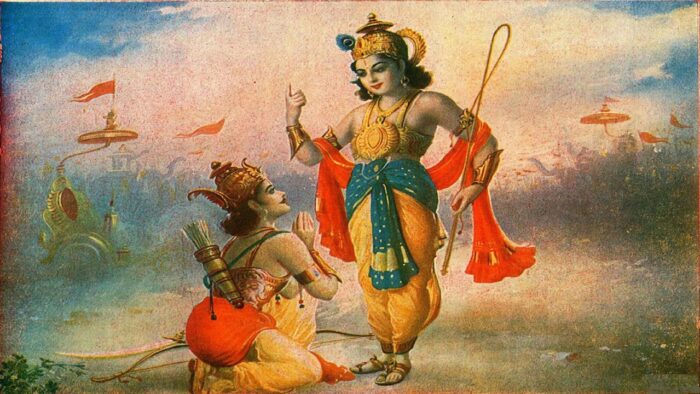 The Gita, uttered from the mukham of Shri Krishna, is vedaanta-saara, the wisdom of the Vedanta which itself is the pinnacle of adhyatma.  Is the Gita a philosophical discourse that the Lord spoke to Arjuna on the battlefield to pull him out of despondency?  Is it only a pedantic theory of clever words and thoughts strung together?

A study of Shri Krishna’s life will reveal that every single lesson in the Gita can be traced to a story in his life.

How is that even possible? One might ask.  How can Gopala of the gopikas, who gave them muda with raasa-leela, the Krishna who had eight principal wives and another 16,000, have the sannyasatva required of the gnaana-maarga?  Is it possible that the recipient of bhakti of innumerable bhaktas over millennia, could have been a bhakta?

On the battlefield of Kurukshetra, seeing his friends and relatives, acharyas and pitamaha arrayed against him, Arjuna grew despondent.  And we empathise with him.  That feeling is reflective of his dharmic, sattvic nature, right?  But have we given a thought to Shri Krishna?  Wasn’t Krishna too in the very same situation?  The Narayani Sena, the army of Krishna’s Dwaraka, was arrayed on the side of the Kauravas, against Krishna and the Pandavas.  Many of his friends and relatives, such as Kritavarma, were on the enemy side.  Like Arjuna had, Krishna too had friends and relatives on the Kaurava side.  He even antagonised his elder brother Balarama, by siding with the Pandavas.  Yet, Krishna was equanimous, unaffected by the situation.  And that is why, he could preach the Gita to Arjuna, and the world, because he had not “learnt” the Gita, he had “lived” the Gita.

When Krishna was barely a teen, he killed his maternal uncle Kamsa, to end his evil rule.  The point to note here is that Krishna killed Kamsa not to obtain the throne or riches.  He did the samhaara of Kamsa because it was his duty, his avataara-dharma, to annihilate adharma and establish dharma, just as it was Arjuna’s dharma as a kshatriya to wage war and protect dharma.  When Krishna killed Kamsa to root out evil, he did not covet the kingdom or the accompanying power.  He truly lived by what he later said in the Gita:

Let us look at another instance from the life of Krishna.  After he killed Kamsa, Kamsa’s father-in-law Jarasandha, the evil ruler of powerful Magadha, attacked Mathura.  In order to escape the wrath of Jarasandha, who had a far powerful army, Krishna and Balarama, along with their followers, escaped from Mathura.  For this act of supposed cowardice, Krishna was ridiculed as ran-chhod, or he who ran away from battle.  There cannot be a worse slur for a warrior than to be called ran-chhod.  But did Krishna fume and rush back to face Jarasandha, in reaction to the slurs?  No!  He accepted the slur to such an extent that it became one of the names which he is celebrated with.  Ranchhoddas is a popular name among Hindi speaking people.  This is a living example of what Shri Krishna says in the Gita:

After killing Kamsa, Krishna could have taken the throne for himself, but he did not.  Instead, he placed the aging chief Ugrasena on the throne; Dwaraka was established under Krishna’s leadership and achieved dizzying heights of prosperity under his guidance.  Yet, he did not style himself the ruler of Dwaraka; it was Ugrasena who led the council that governed Dwaraka.  Krishna truly viewed a clod of earth and a lump of gold equally – samaloshtaashmakaanchana.  He did not let the praises heaped touch him, nor was he disturbed by the abuses hurled.  That is why, he is both Arisoodana – subduer of enemies, as well as Ranchhod – he who ran away from battle.

People say that Krishna was an incarnation of Mahavishnu, so he could do all that; however, we are ordinary mortals, how can we do what he did.  This attitude is reflective of the attitude of most people – we are either trying to find excuses to not conduct our lives in the right manner, or we are steeped in ignorance.  Krishna’s life was not a smooth journey without obstacles.  Even before he was born, his uncle plotted to kill him.  When he was an infant, assassins were despatched to murder him.  He was already a hero by the time he was in his early teens; he could have basked in the adulation of the people of his village.  But he realised his destiny and challenged Kamsa, ultimately killing him.  Outnumbered by the army of Jarasandha, he had to run away from battle.  He set up a new city, from scratch, in distant Dwaraka, which he took to heights of prosperity.  He had enemies all around, from the Nishadhas, to Vidarbha.  His favourites, the Pandavas, through who he wanted to establish dharma, often did foolish acts, such as gambling away their fate in a game of dice, not once but twice; agreeing to settle for five villages instead of their rightful inheritance.  There are several such instances.  Krishna faced every setback with courage and resourcefulness and emerged stronger, victorious.

So, when Krishna told Arjuna,

It was not a “feel good quote.”  It was something that Krishna had lived every single day of his life.  The diametrical opposite of this was Duryodhana, who by his actions, accelerated his own downfall.

What then is the takeaway from this for us grhasthas, steeped in the material world, the samsaarasaagara?  Again, we take inspiration from Shri Krishna’s life. Everything that he did, he did as his dharma, and he did it to the best of his abilities.  This is exactly what he meant when he said,

The lesson for us in this is that we should perform actions, our duty, to the best of our abilities, with श्रद्धा.  This is why it is samaachara and not aachara.

In this, the Gita, and our other holy texts are unique among the holy texts of the world, for they not only tell us what to do, but how to do it.  They are not simply philosophical discourses, but are experiential texts that have been lived.  This is the core of Indic thought, that the atman cannot be known, the atman can only be experienced.