The Importance Of The First Chapter Of The Bhagavad Gita 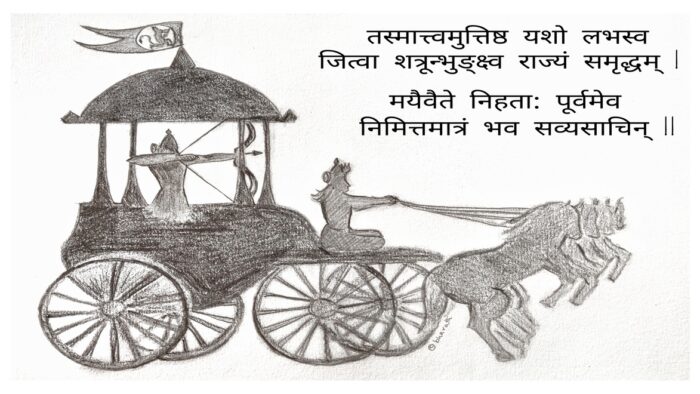 Before we get into a discussion on the first chapter, it is necessary to understand that the Gita is not read, it is studied. A novel is read. A magazine is read. But the physics textbook is not read, it is studied. In the same way, the Gita is studied, with care, attention, and discipline. The study of the Gita commences from the first chapter, titled Arjuna Vishaada Yoga, the despondency of Arjuna.

The first chapter is the starting point of the inquiry of a seeker, answers to which are contained in the Gita. In order to get to the answers, it is necessary to know the questions and understand them.

In the Gita, Arjuna raises a few important questions in the first chapter.

Every single word of the Gita has deep meaning and significance, and the first chapter is no exception. The names of people, of places, have a particular meaning and import. Rishi Vedavyasa, the chronicler of the Mahabharata, of which the Bhagavad Gita is a part, did not include words to make up the poetic metre or use them flippantly.

The third layer is the guudaartha, the hidden meaning. This is the deepest layer of the Gita whose true meaning is hidden from view, and can only be unearthed by dedicated study and with the guidance of a Guru, a teacher. Such a Guru guides the seeker along the path shown by the Gita to self-realization, in accordance with the spiritual evolution and readiness (pari-pakvata) of the seeker.

The famous bhashyas of yore help peel these layers of deep meaning. However, the best commentaries and explanations can only put the looking glass in front of the seeker; it is the seeker who has to see through that looking glass.

The deep meanings of the Gita are to be realized, not understood. This is achieved by a constant and disciplined process of study-contemplation-practice, what is traditionally called shravana – manana – nidhidhyasana.

In the first chapter, Dhritarashtra asks Sanjaya to narrate to him what were his children, and those of Pandu, assembled in the battlefield, doing. This is the only shloka spoken by Dhritarashtra in the Gita. The rest of the Gita is Sanjaya’s reportage of the questions asked by Arjuna and Shri Krishna’s responses, with a very brief narrative of Duryodhana’s actions in the initial few shlokas.

The words dharmakshetre kurukshetre have particular significance. The literary meaning of this phrase is: the field (of battle) of the Kurus, which is sanctified by dharma. In adhyatma, the human body is referred to as “kshetra,” the field.

Just as the 18th chapter is a summary of the contents of the Gita, the first chapter is an introduction to its contents. Dhritarashtra, who is not a participant in the battle of Kurukshetra, is curious to know what is happening in the battlefield.

This he does because of attachment: attachment of love (or raaga) to his children and attachment to the emotion of hate (or dvesha) to the children of Pandu. This is reflective of the deluded Self, or the Atman, which despite not being the doer of actions (or kartaa), is attached to the unreal world with sentiments of raaga and dvesha. It is this attachment that is the root of all misery.

If we were to examine this situation of Dhritarashtra, what causes him grief is not the fact that there is a battle going on, but the fact that he is attached, on the one hand to his children with positive emotion, and negative emotion to others.

As the Lord elucidates in later chapters, the cause of sorrow is not the performance of actions, but attachment to actions. On the one hand, we have an attachment that “I am the doer of actions”, while the “I” or the Self, is only an observer, much like Sanjaya, whereas it is the body, with its gross and subtle elements that are the performer of actions. On the other hand, we have an attachment to the outcome of the actions, just as Dhritarashtra was anxious about the outcome of the battle.

The three characters who appear in the first chapter of the Gita are Dhritarashtra, Sanjaya and Arjuna, and each of these represents a person at different stages of spiritual evolution.

At the basest level is Dhritarashtra. Dhritarashtra was born blind. Sage Vedavyasa granted divine vision to Sanjaya so that he could see the happenings in the Kurukshetra battlefield and report them to Dhritarashtra.

If Vedavyasa could grant divine vision to Sanjaya, why not directly grant it to Dhritarashtra? Dhritarashtra’s blindness was not only a physical blindness, but blindness at a deeper, spiritual level. The very name Dhritarashtra, which means one who is firmly rooted in rashtra, or the earth.

The earth (bhoomi, or piece of land) is symbolic of all that is worldly. Therefore, Dhritarashtra was one who was deeply attached to worldly things. This is reflected in his words: maamakaah paandavaah cha eva kim akurvata, where he asks Sanjaya, “what were my children and those of Pandu doing?” As their paternal uncle, he was in the position of a father to the fatherless Pandavas.

Yet, he draws a distinction between his own children and those of Pandu. This shows the depth of his attachment. He was seeped in the darkness of ignorance, an ignorance that robbed him of the discrimination between right and wrong.

That discrimination to distinguish between right and wrong, to choose the right path, to understand that which is real and that which is not, is to be had by divine vision. Sanjaya, by his dharmic conduct, had evolved spiritually and was ready to receive the gift of divine vision, whereas Dhritarashtra was not.

As a result, Sanjaya had the good fortune of not only hearing the words of wisdom of Shri Krishna, uttered to Arjuna, but also witness the vishwa-roopa of Shri Krishna.

In a similar state as Dhritarashtra, is Duryodhana. The word Duryodhana means he (or that) which is difficult to conquer. As humans, we are filled with the six kinds of impurities: kaama (desires), krodha (anger), lobha (avarice), moha (delusion), mada (pride), maatsarya (envy).

At the root of these are desires and attachments. It is these that are difficult for a human to overcome. On the eve of the battle of Kurukshetra, Duryodhana tells Krishna that he knows what the path of dharma is, but there is something that is preventing him from walking on it. That something is ignorance. It is the same ignorance, that despite knowing what the right path is, keeps us attached to desires and worldly objects.

Arjuna represents the other end of the mundane spectrum, of people who realise that there is something missing, that there is a higher purpose to life, but don’t have all the answers. Such people recognise the higher wisdom of a Guru, and surrender themselves to such a Guru with humility, like Arjuna did to Krishna.

Sanjaya is further ahead in spiritual evolution. Though he fought the Kurukshetra war on the side of the Kauravas, he was not overwhelmed with grief or joy. He fought in the war as a duty, performed without attachment. He had the vision of discrimination, to distinguish between right and wrong; between the real and the unreal.

Despite these differences, the Bhagavad Gita was given to all three: Arjuna heard it from the lips of Shri Krishna; Sanjaya witnessed it with his divine vision and Dhritarashtra heard it as reported by Sanjaya. The lesson in this is that it does not matter at what station in life we are at or where we are at the mortal plane in terms of age or status in society.

In life, each of us is at various stages of spiritual evolution. Some are deluded and blind, like Dhritarashtra, with deep attachments; some are like Duryodhana, with qualities that are difficult to overcome; some others are like Arjuna, not yet realised, but realising the futility of mundane living, full of doubts and despondent; yet others are like Sanjaya, a bit ahead in the path, with discrimination, and able to overcome all that Dhritarashtra and Duryodhana represent.

Wherever we may be on this path, the Lord’s benevolent assurance is this, that we need not despair. For with His grace, the confusions will melt away, the dirt on the mirror wiped away and Dhritarashtra and Duryodhana become an Arjuna, and then a Sanjaya, to ultimately become one with Shri Krishna, as we realise that we are That.

I am grateful to my Gita Guruji Smt. Tina Dhaval Das, for accepting me as a student and teaching the wisdom of the Gita. This essay is offered at her feet.

1. The human body has three layers. The first, the sthoola shareera or gross body, is the body that we see and feel, made up of skin, flesh and bones. The next layer is the sookshma shareera or subtle body, which is comprised of the five senses (not the sense organs, which are part of sthoola shareera), and the mind. The subtlest layer is the kaarana shareera or the causal body, which causes the sthoola and sookshma shareera to perform the activities. This is also identified as aham, or ego. A more detailed discussion is beyond the scope of this article.