The Wonder That Is Sanskrit By Sampad And Vijay 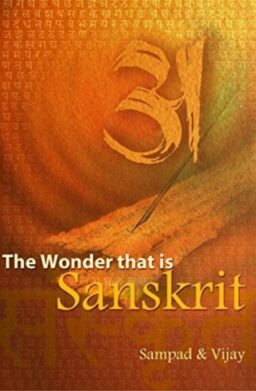 “The wonder that is Sanskrit” is a fantastic little book written by Shri. Sampad and Shri.Vijay. I recommend this book to anyone looking for an introduction to Sanskrit.

This book must be revised in light of the present situation of the relevance of the Sanskrit language in our country. The common opinion that we once held that study of the Sanskrit language is only for priests and scholars is no longer true. Today there is an unprecedented interest among the general public to learn Sanskrit. Some turn to it to study the various scriptures in their primary form. Experts perceive Sanskrit as a tool to gain access to higher learning in various disciplines.

Authors are exploring the vast Sanskrit literature spanning centuries to turn them into works of fiction and non-fiction. A genre earlier referred to as ‘mythology’ and now called Puranic fiction has found some serious readership. Many others simply take up the study of Sanskrit out of sheer curiosity. Sanskrit scholars are being acknowledged more than ever before and they are most sought after. Parents are also encouraging their children to learn Sanskrit instead of foreign languages.

However, the most pressing need to learn Sanskrit today is to truly appreciate who we are as a nation and what it means to be an Indian. In the words of Smt. Pushpa Dixit, an eminent scholar in Vyakarana, “It is impossible to understand our great country Bharata without understanding Sanskrit” “Sanskrit ko jaane bin Bharat Rashtro ko jaanana asadhya hai”.

Sandeep Balakrishna, writer and author of Indian history and culture in his widely read portal The Dharma Dispatch says, ‘Teaching Sanskrit to children will save our languages and Hinduism”. Sanskrit truly is the need of the hour.

In India, there is a marginal section of the society which has been fortunate to gain exposure to Sanskrit, either at school (albeit as a third language) or at homes where Vedic chanting or prayers are a way of life. However, the majority suffer from little to no understanding of this ancient language. For someone who has never been exposed to Sanskrit, it can be a very intimidating experience to approach the subject or learn the language. The reason for this is the safe distance maintained by most Indians from Svabhasha and Svadharma.

‘The Wonder that is Sanskrit’ is a book that brilliantly addresses all the concerns and provides a wonderful insight into the world of this ancient language with a timeless appeal.

This book is aimed at readers who have little or no exposure to Sanskrit but are eager to learn it nevertheless. This book is not a scholarly work. As the title suggests, it looks at the Sanskrit language with a sense of wonder. The reader is bound to not just admire it but also fall in love with Sanskrit. It is packed with anecdotes and references. All the Sanskrit words are transliterated as well as translated for easy understanding and pronunciation.

While it is not imperative to know the Devanagari script, a good understanding of a regional language or mother tongue will definitely enhance the reading experience of this book. The authors point out that knowledge of the mother tongue is extremely effective in learning and appreciating Sanskrit for Indian readers.

This small book consisting of 200 pages has 10 short chapters touching upon various aspects of the Sanskrit language. There is also a well-compiled glossary at the end.

The first two chapters deal with the structured alphabet system and grammar. Brilliantly addressing the rhetoric ‘Sanskrit is a dead language’, the authors establish how Sanskrit has not just survived and thrived over the millennia but how it continues to be full of life amongst the many regional languages of our country.

Did you know that just by reading the alphabets aloud with Anusvara, Visarga or Hrusya swaras amounts to practicing the Pranayaam? The book quotes Prof. Sampurnanda who says, “Sanskrit is not merely alive but it is a medicine to make the dead alive”.

With short sections on fundamental grammar concepts as enunciated in Aṣṭādhyāāyī and Amarakoṣa, the book explains why Sanskrit is not only the most sophisticated language system in the world but also how it is essentially a phonetic science of extraordinary merit.

This is a fact acknowledged by linguistic scholars around the world. Panini’s Ashtadhyayi which is considered the most seminal work in Sanskrit consists of 4000 sūtras created over two thousand years ago. Aṣṭādhyāāyī is referred to by Sanskrit students and scholars alike even to this day. One is bound to ask the question as to what makes these sūtras not just stand the test of time but also continue to serve as a guiding light for experts through centuries?

Authors say, the answer lies in the definition of sūtra itself,

Now isn’t this a great takeaway for not just linguists but also for engineers, programmers, mathematicians, lawyers, journalists, artists, etc?

Now, if this gives an impression to the reader that Sanskrit is all about strict adherence to rules, one cannot be more wrong. In Sanskrit, as the famous saying goes, there are no rules for those who make the rules.

The chapter titled ‘Interesting and Amazing Creations in Sanskrit” introduces the subject of adhamakavyas where the greatest literary figures like Kalidasa, Magha and Bhartrihari have playfully indulged in the language to create seemingly gibberish verses which are in fact carefully crafted and grammatically complex literary nuggets.

Take for example, this verse from Magha’s Śiśupālavadha praising the glory of Lord Krishna while he hurls a weapon at the wicked enemy.

The chapter also explores the wonderful world of Citrakāvyas. A special literary genre, called Citrakāvyas are poetic verses with made up rules for a simple example, avoiding a particular vowel sound or using only one specific vowel sound etc. These clever verses hide profound meaning as well as complex visual patterns for a discerning reader.

A classic example of this is an entire Ramayana composed by Mallikarjuna Bhatta referred to as ‘Niroshta Ramayana’ devoid of any labial sounds that require lip movement. Imagine a game of ‘read my lips” with verses from Niroshta Ramayana. Niroshta literally means ‘without lips’ and there is a Carnatic raga in its name created by Muthiah Bhagavatar.

Interdisciplinarity or study involving the combination of two or more academic disciplines into one activity is an inherent feature of the Sanskrit language. Another chapter dedicated to ‘Beauty and charm of Sanskrit poetry’ provides further insight on this topic.

The book was written as part of a project titled ‘Resurgent India’ whose endeavor was to discover and document the greatest and highest achievements of India in every field. A chapter on “Sanskrit in Arts, Science and Daily Life” mentions the interesting discoveries in math and science which deliberated and expounded complex concepts centuries ahead of the west.

The chapter on “A language of upliftment and enlightenment” explores the wonderful world of Nītiśataka, Subhāṣita, and Hitopadeśa along with short paragraphs on Upaniṣad and Gītā. These works composed thousands of years ago are ancient but timeless wisdom.

“Sanskrit flows through our blood. It is only Sanskrit that can establish the unity of the country”

and the profound words of Sri Aurobindo who said,

“It (Sanskrit) is of utmost value to a nation, a human group-soul to preserve its language and make it a strong and living cultural instrument. A nation, race or people which lose its language cannot live its whole life or real life”

These words are further substantiated by looking at the various regional languages of India which have heavily borrowed the vocabulary from Sanskrit. Furthermore, it busts the myths attached to Sanskrit as a “Hindu language”, “dead language” or the most popular one which tags Sanskrit as a “difficult language”. The last chapter on “The language of India’s soul” refers to Sanskrit as the common national inheritance and a tool to override the regional differences.

In an academic paper that observes the role and the potential of Sanskrit in India’s cultural and national landscape by Prof. Makarand Paranjape, he mentions a wonderful quote by Dr. Lokesh Chandra that summarises the present situation,

“Sanskrit is the thread on which the pearls of the necklace of Indian culture are strung; break the thread and all the pearls will be scattered, even lost forever.”

The Wonder that is Sanskrit is available on  Amazon.