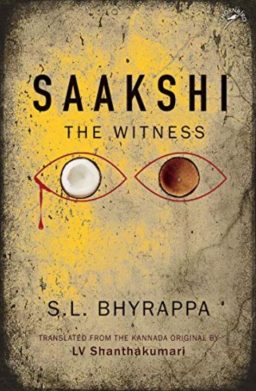 Sākṣī [1]  is not the most popular novel of Dr. S.L Bhyrappa. Yet, those who have read it will tell you that it is right on top of their favorite list. Sākṣī is very unique in its plot and narrative style.

Writing and publishing in Kannada since 1955, Dr.S.L Bhyrappa has a pan-Indian readership. His exploration of fundamental human emotions with deep Indian ethos is unparalleled. Ardent fans of Dr. SLB will tell you that his novels are nothing short of epic creations.

The themes are contemporary and timeless at once. They make for a deep philosophical reading experience. It is no surprise that his novels are translated to so many Indian languages.

Each of his novels is akin to a brilliant painting on a larger than life multi-layered canvas with an explosion of colors. It grips you at first glance. But, it takes multiple readings to appreciate and understand the artwork, its hues, length, breadth, and depth. Sākṣī is no exception. Critiquing Dr. SLB’s works is a favorite topic for student dissertations.

But very few have written about Sākṣī. A critical essay can be found by Smt. L.V Shanktakumari in her Kannada book Yugasakshi: Bhyrappara Kruthigala Avalokana. There is a 6 part Kannada essay by Shreesha Karantha on Prekshaa [2] which mentions a few more references.

This is a review of the novel Sākṣī for anyone who has just started reading Bhyrappa. An excellent English translation by Smt. L.V Shantakumari is available on Amazon [3]. Sākṣī is also available in Hindi.

Sākṣī explores the idea of what happens after death in the context of our Puranas and Upanishads. Some background information and prior study is necessary to appreciate this groundbreaking work.

Specifically the concept of ‘Afterlife’ and ‘Sākṣī’ which must be interpreted in the context of our scriptures. Serious students of Vedanta will confirm that there are entire texts and chapters in seminal works dedicated to the discussion of these two topics. I have attempted to explain these two in simple terms below before reviewing the novel.

Afterlife – What happens after death?

One of the most sought after Vedic texts to understand death and what happens to the soul is Kaṭhopaniṣad – a dialogue between 9 year old Naciketä and Yama the lord of death. As per Kaṭhopaniṣad , the ego centre, after the death of the body, remains intact in the form of ‘an idea’ until it comes again to fix the relationship with another form.

That which helps the ‘floating ego’ to choose its next rendezvous is the sum total of the reapings it has to make with ‘new form’ in the new field of things and circumstances. Indeed, there is no philosophical concept so tight in logic and so true in reason as the Law of karma which is a special blessing enjoyed only by the Hindu community [4].

Sākṣī (literally meaning witness – sākṣāt īkṣate iti sākṣī [5]) refers to the pure awareness that observes the world with equanimity and records all thoughts, words and deed without interfering with them.

Anyone with a basic knowledge Vedanta will tell you that the word ‘observation’ takes a whole new interpretation in vedanta. Again, there are many chapters dedicated to this topic in most Indic texts including the Bhagavad gītā. I have quoted one or two below.

Shri Krishna points out the progression of devices made available for observation in 3.42 of Bhagavad gītā,

Furthermore, the process of observation is elucidated in the vedantic text ‘Dṛg-Dṛśya-Viveka’ also referred to as ‘Vâkyasudhâ’ which establishes the distinction between the observer and the observed in its very first verse.

Why is it important to understand the nature of this observer-observed and the observation? According to Vedanta, the direct knowledge of Ātman or Self is the means to the attainment of liberation. Dṛg-Dṛśya-Viveka helps the seeker understand and correctly grasp the sense of each word in the great Vedic statement ‘तत्त्वमसि’ – ‘That Thou Art’.

The above verse explains the significance of ‘Thou’. It states profoundly that “Ātman/ Self/ Sākṣī/ Witness” is the ultimate perceiver (observer) as no other seer is known to exist and the knowledge of this is never absent! This Sākṣī is timeless in nature and beyond space as well.

At the outset, it is clear that the novel stays true to its name. The focus of the narrative remains steadfast with the exploration of this abstract concept called Sākṣī.

The opening scene is set in the supernatural world of the dead. It starts with the ‘idea’ (ego center) of an individual – a certain Parameshwariah who has committed suicide for not being able to live any longer with a lie.

This lie he was coerced to utter in a court of law – a trial court in remote Karnataka of 1940-50. Parameshwariah is not really worried about the consequences of the trial. He merely cannot live any longer with that lie! So, he decided to kill himself and succeed. Fascinating so far, isn’t it?

Though the author sets the context adequately in the first few pages with words such as ‘preta’, the supernatural or paranormal theme is certainly unusual.

Multiple readings might be required to understand this better. I also recommend reading the first chapter all over again after finishing the book. It is bound to leave you dumbstruck.

Unfortunately, Parameshwariah’s rendezvous with trial court does not end with his death. He must now now face the ultimate trial of all with none other than Citragupta as the erudite court clerk and Lord Yama himself as the presiding officer!

The whirlwind plot takes the reader through a fascinating journey of life and times of Parameshwariah. Of course, there are his children Ramakrishna and Savitri, but most importantly there is Manjiah , Parameshwariah’s son-out-law! Manjiah’s sexual exploits bring in many other characters like Lakkoo, Sarojakshi , Appajappa, etc.

From page one, the reader is a mere fly on the wall while characters get intimate with each other and more often with themselves. Janakamma, the late wife of Parameshwariah is summoned to the trial as well.

In his usual inimitable style, Dr. SLB paints a vivid imagery of characters and weaves a vibrant tapestry of the social fabric of the times. With enough twists in the story and many laugh out loud moments this book is a page-turner.

Manjiah’s raunchy affairs are described in great detail to the extent of upsetting some readers who have complained that it is unnecessary. This kind of allegation is not new to Dr. SLB’s works.

As Parameshwariah comes to terms with his life as well as death, the plot comes a full circle. Parameshwariah’s quest of Sākṣī continues in his next life! It may take one more cycle of death and rebirth or perhaps many more. Each gaining more baggage (karma? Lessons learned?) than the previous cycle.

I felt the following verse from Kaṭhopaniṣad summarises the storyline of Sākṣī very well:

I highly recommend Sākṣī to anyone who enjoys reading novels based on Upanishadic themes.

Saakshi: The Witness Hardcover is available for purchase from Amazon.