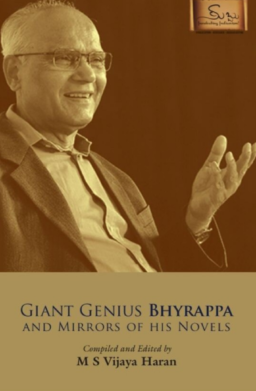 “What is in here may be found elsewhere; but what is not here can not be found anywhere else!

This Vyāsokti (utterance by Vyāsa)  in Mahābhārata might as well be repeated for the spectacular body of literary works created by Dr. S.L Bhyrappa. He has penned 24 novels and four volumes on literary criticism apart from books on aesthetics, social issues and culture. Many Ph.D dissertations are written based on his books. However, the largest branch of derivative works are translations of Bhyrappa’s books into English and various other Bharatiya languages. Bhyrappa’s Magnum Opus Parva is also translated to Chinese and Russian. Apart from these there are many books written by various scholars and laymen critically analyzing and commenting on  Dr. Bhyrappa’s books. Such is the reach and relevance of Dr. S.L. Bhyrappa.

Subbu Publications has come out with a new book in this ever expanding genre of derivative literary works based on Dr. S.L Bhyrappa. The book is titled – ‘Giant Genius Bhyrappa And Mirrors Of his Novels’. This book however,  is very unique in the sense that it does not exactly comment or critically analyze Bhyrappa’s writings. It has been painstakingly put together by Smt. Vijaya Haran with an intention to pay homage to the many ardent fans of Bhyrappa who were so inspired by his books that they took the next logical step to make his works reach a wider audience who could not otherwise have access to Bhyrappa.

During the launch of Giant Genius..,  Dr.Pradhan Gurudatta, a long time associate of Bhyrappa and as someone who has translated his seven novels, quoted from Tagore’s Gitanjali lauding the efforts of translators.

“ Thou hast made me known to friends whom I knew not.

Thou hast given me seats in homes not my own.

Thou hast brought the distant near and made a brother of the stranger.”

In India, typically any book with decent sales gets translated into other Indian languages. Most often,  this exercise in translation is driven by the publishing house with the sole intention of selling a few more copies. However, it is evident from ‘Giant Genius Bhyrappa And Mirrors Of his Novels’ that translations and adaptations of Bhyrappa’s novels are a class apart.

Bhyrappa writes in Kannada. The language is earthy, effortlessly natural, rich in its expression and deep in its interpretation. Kannadigas cannot even imagine reading a Bhyrappa novel in any other language. Except five (Bheemakaya, Doora saridaru, Matadana, Grahana and Jalapata) all the remaining nineteen novels have been translated into various Indian and foreign languages. Bhyrappa’s works have also been adapted to movies , plays , radio shows, audio books and tele serials. Through their yeoman service, the translators, creative directors and producers have contributed to the pan indian readership and wide admiration and adulations that Shri Bhyrappa richly deserves today.

In the first 35 pages of the book, Smt. Vijaya Haran shares the roller coaster journey of reaching out to every person behind every translation and adaptation.

Smt. Vijaya’s prologue is followed by a fantastic synopsis titled ‘Translators Resurrected’ by Dr. C Naganna, former professor of comparative literature and Translations Studies. With his inimitable linguistic style Dr. Naganna has summarised the entire book in a succinct manner. It is a joy to read the foreword again after completing the book.

Running into 600 odd pages, the book is divided into six parts and an Appendix of 39 pages. The large print is easy to read but the book itself feels bulky.

There are three articles in this part written by Shri S.L Bhyrappa himself and two others by Dr. S. Ramaswamy and S.R. Ramaswamy. The articles portray the rich life experience and creative process which makes Shri S.L. Bhyrappa a Giant Genius.

In this most important section of the book there are 35 articles by various translators. The first hand accounts give a peek into the process of translation and the level of competence and scholarship that is required to translate Bhyrappa’s works in Kannada to other languages. What is most striking is how almost every translator, after having read Bhyrappa, is so deeply moved that she or he thinks it is a dharmic obligation to get involved in the process of recreating it to reach a wider audience. It is not surprising that his novels have been translated to not just Sanskrit, but also sanketi and havyaka languages which have limited but excellent readership.  This is the true lakṣaṇa of a sahṛdaya in our tradition. It is a matter of great pride as well as blessing that we are living during the life and times of Shri Bhyrappa and get to be part of the community of thousands of such sahṛdayas.  Dr. Naganna very aptly refers to the translators as trans co-creators.

Generally, when books of popular authors are translated very little is known about the translator or the process of translation. Typically a translator’s note at the beginning or end of the book is less than 1 or 2 pages. However, it must be noted that Bhyrappa’s novels have dealt with pretty much all aspects of emotions available to humanity. He has written on politics, social issues, culture, music, history, science, philosophy ,current affairs, Indic knowledge systems, psychology among other things. In each of his novels, Shri Bhyrappa delves into one or more of the above topics by deeply analysing the undercurrents and fault lines through exploration of fundamental human emotions. Translating his works requires much more competence and scholarship than mere proficiency in two or more languages. We understand from the ‘Giant Genius..’ that almost every translator or creator of adaptations is an erudite scholar in her or his own right.

Notable among them are

This book also offers many insights from the point of view of languages. Some observations are below :

Scholars Dr. Vishwasa H.R ,  Shri. Gundmi Ganapayya Holla , Vid. Janardhana hegde have shared their experience of translating in Sanskrit. Shri Holla shares an anecdote where Bhyrappa sought to change the title of the book from the literal ‘Nanaathastvamasi vatsa’ to simply ‘Anaathosi’. This genius suggestion speaks volumes about not just translating the novel in the spirit of its original language kannada but also to  keep the spirit of sanskrit with its hallmark brevity intact.

Shri. Sudhakaran Ramanthali , an avid reader of literary works in both Kannada and Malayalam , has a large body of translations to his credit including translating complete works of Kanakadasa into Malayalam. The camaraderie he enjoyed with Shri Bhyrappa and the process of translating magnum opus Parva into Malayalam,  a naturally verbose language makes for an interesting read. Shri Sudhakaran is currently working on translating Mandra.  Smt. Geetha Jayaraman has translated Aavarana based on the english translation of the original by Shri. Sandeep Balakrishna. One would expect some things to get lost due to hops in  translation. But Smt. Geetha says how a reader admitted how “..at many of the key moments in the novel , he had been so overwhelmed by grief for Lakshmi that he had struggled to continue.”

Shri. K.V Kumaran who has translated Yaana to malayalam has also shared his story.

Among the bharatiya languages, Shri Bhyrappa’s has the largest readership in marathi after kannada and hindi. Out of the 16 marathi translations, Smt. Uma V Kulkarni has translated fourteen ! An interesting anecdote by her mentions,  Smt. Sudha Murthy being her neighbour in 80’s Pune and lending her  a copy of Vamshavriksha. A very interesting observation by Smt. Uma reveals the reason behind Bhyrappa’s large readerbase in marathi.  “..about the social climate of Maharashtra and its effect on the state of mind of the average Marathi woman, which , in turn , impacts her absorption of a literary text. The average Marathi woman is in a state of some stress, more often than not. Bhyrappa is that rare writer who understands the state of mind of a woman, and better still, articulates it with startling lucidity , much better than she would ever be capable of.”

In Part-III Other Translators, there are 11 articles compiled by the editor Smt Vijaya Haran introducing  a diverse group of authors who have translated Bhyrappa. This section showcases the rich diversity of our great nation and its literary heritage. A notable mention is of Shri Navantilal Parasottamadas Shah who was in so much love with the languages of south India that he wrote and translated extensively under the pen name – Navnit Madrasi!

Apart from derivative works that are literary in nature, Bhyrappa’s novels have also inspired many to explore different innovative formats. Among these,  articles in Part-IV Adaptations of S.L Bhyrappa’s Novels on a radio-play based titled Vaunshavriksha by Smt. Gauri Lagoo’s radio-play based on Vaunshavriksha and 24 audio books on the Daisy platform by Mitrajyoti for the visually challenged are truly noteworthy.  There are also articles on theatrical adaptations of Mandra, Parva, Vamshavriksha , Nirakarana etc., dance adaptation, tele serials and movies. Of these,  Girish Kasaravalli’s recount makes for a very interesting read for Gruhabhanga fans.  His Kannada tele-adaptation of ‘the sweetest song telling the saddest tale’ (words of Prof. Shantakumari) was hugely popular in Karnataka when it first came out. Shri. Kasaravalli shares that Bhyrappa involved himself in the creative process and diligently watched every episode.

Part –  VI Comments from the Press has a few articles and reportage including pictures of the epic theatrical production of Parva by Shri Prakash Belawadi.

Having undergone the pains to extract every essence of the Bhyrappa experience available today, Smt. Vijaya Haran has left no stone unturned. The detailed six part list available at the end of the book tracing bibliography, chronology and contact information of all authors is evident from my previous statement. This book is a must read for anyone who is interested in translation, process of creating derivative works based on Bhyrappa’s novels and anyone who wants a glimpse into the literary genius of Bhyrappa.

Lastly, as a lover of languages, I was struck by the various choice of titles in other languages while reading this book.

Giant Genius Bhyrappa And Mirrors Of his Novels is available for order here: https://subbupublications.com/product/giant-genius-bhyrappa/