Beyond The Veil: A History of Bharatavarsha by R.S Narayanaswami 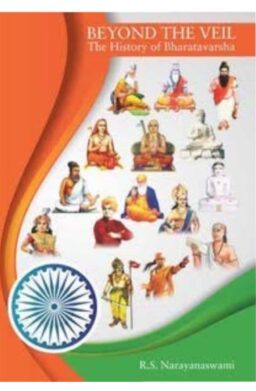 During the long years after Independence, a persistent source of concern to nationalists has been the unavailability of history books that can introduce Indian history to younger readers without the veils of ideologically motivated historiography.

Even if well-meaning educationists embark upon this subject, the established source for reference have all been written by historians that are aligned with Western schools of history writing. This introduces imbalances in narrative and large blind spots in our history.

The late Shri R.S. Narayanaswami has written ‘Beyond The Veil: A History of Bharatavarsha’ – a primer that seeks to redress these failings. It is a 400-page volume that covers the entire panorama of the subcontinent’s history from the Vedic Age to Independence.

It is clear from the structure that Shri Narayanaswami has intended for the book to be a ready reckoner and a reference for college-going students. He describes it as a yajna undertaken over four years in his 80s. The Tamil version has been in print for a few years now and the book has been translated in English by Shri M R Subramani and Shri Aiyasami Uthandaraman.

The roots of the extensive research done by Shri Narayanaswami are reflected in his career path. Born in a mirasdar family of land owners belonging to Renganathapuram in Tanjore district in 1924 Narayanaswami completed his schooling at the local Sri Sivaswamy Ayyar High School, Tirukattupalli. He attended the St. Joseph’s College in Trichy and finished his M.A, in History, Politics and Economics.  He started working as Assistant Professor at the same college where studied for a few years but later left the job to join the first batch of diploma in Journalism Course conducted by University of Madras. Post completion of the course he joined the English daily “Indian Express “as Assitant Editor in 1956 and after for 30 years retired as Chief News Editor in 1987. During his tenure in Madurai for 30 years  he worked closely with Jana Krishnamurthy  of BJP in building a strong base for the party. He was also associated with Hind Kusht Nivarana Sangh. He was one of the members in Eknath Ranade’s team that played a crucual role in erecting the Vivekananda Rock Memorial at Kanyakumari. Throughout his life he interacted with many learned people, researchers, saints and politicians which helped in shaping the final but most useful book he penned.

The Foreword, written by the doyen of Indian epigraphy Padma Bhushan R Nagaswamy, makes no bones in stating the purpose of this book as primarily for correcting history, distorted for political convenience.

A careful reading of the book is required to ascertain whether the stated objectives have been met.

The book has been carefully arranged along both time and themes. It was originally published as 3 volumes and the structure continues in the English version as well. The 3 parts of the book are laid out along the standard divisions of Indian history.

While the narration is largely linear in time, within the sections Shri Narayanaswami has tried to separate it by themes. There is a chapter on the Marathas and another on the Moghuls, for example, with the touchpoints between both narrations placed in the chapter most relevant.

The pace of narration can seem breathless at times, crammed as it is with facts, dates, and names, but it is important to note that the author’s focus on brevity makes it a more dense document as compared with the NCERT’s History books for classes VI to X, that have 300 odd pages but have less than half the factual richness as this book.

What strikes the reader are the reliance of the author on nativist readings and sources – Ki Va Jagannathan in his retelling of Sangam-era history and KM Panikkar elsewhere.

The author has covered many topics and events that have been left out in our standard history textbooks. Let us list the ones we noticed from our reading of the book.

1. He has not omitted the numerous acts of iconoclasm by Islamic invaders. Among these are

2. The sordid history of the short-lived Madurai Sultanate is mentioned in a short note

3. Avoiding the usual hagiographies, Haider Ali’s usurpation of the throne of Mysore, Tipu Sultan’s invasion of Malabar, and his jihad against the Hindus of North Malabar are recounted.

4. Ignoring the Communist depiction of the Malabar Moplah riots of 1921 as a class struggle, the event is chronicled exactly as it was – the establishment of an Islamic Caliphate after the Indian Khilafat Movement failed

6. The tragic tale of Kashmir’s de-Hinduization and the suffering of the Hindus of Kashmir over the centuries are documented in a separate chapter

7. The events leading up to Jinnah’s call for Direct Action Day, 1946, the violence unleashed and the after-effects have been described

8. The violence visited by the Portuguese conquistadors in South India and the effectiveness of the Vijayanagar Empire in restricting the damage done by them are mentioned

9. Rather than repeat fallacies about Amir Khusraw Dehlavi and his storied discovery of the tabla, his actual writings are analyzed and the horrors visited on Deval Devi, queen of Devagiri by Malik Kafur and his overlord, Allauddin Khilji, find a place in this book

Some interesting facets of the book

Rather than treating the book as just another history, the author begins with a chapter describing how India is a country blessed by a boon of immortality and echoes Savarkar’s characterization of Bharat as a Karma Bhumi and a Punya Bhumi.

In keeping with Hindu cultural ethos, which determines that an endeavor must begin with an invocation to Gurus, Shri Narayanaswami moves on to begin the actual narration of history with recounting the great sages and thinkers who have lived in this land – Buddha, Mahavira, and Sankara Bhagavatpada.

The NCERT approved history textbooks usually describe the Indian freedom movement after the emergence of Gandhi Ji as a purely non-violent endeavor. The author has stated facts of the times and also placed views that make the reader re-evaluate the historical Mahatma without taking away from his stature. The prevarications and failure of the Khilafat movement are laid out in as bald a fashion as is possible for a book of this nature.

Most history textbooks treat the history of South India before Vijayanagara as an addendum, but the author has placed it as contemporaneous and part of the same historical continuum as the rest of India.
The Indian influence on South East Asia and the inclusion of the whole region of South East Asia in a larger Indosphere is placed in the centre of the book.

The Sikh Gurus are treated in a more modern fashion, which places them as part of the Hindu tradition, rather than the colonial treatment of the Sikh tradition as a rejection of Sanathana values.

NCERT approved textbooks only deal with failed armed struggles during the Independence movement, such as Bhagat Singh’s attempt, but here Shri Narayanaswami has included the successful strikes carried out by the Chapekar Brothers and Vanchi Iyer.

Vasudev Balwant Phadke’s insurrection finds mention in this history. He also gives a more balanced view of the Arya Samaj and Brahmo Samaj’s origins and their full impact on Hindu Society.

Our complaints
We have our own complaints against this book in failing to redress some faults of the standard narrative:

There are a few bloopers, that seem inadvertent, such as calling Pulakesin I, the Chalukya as an Arya Samaj follower for performing the Agnihotra and other Shrauta sacrifices and asserting that the 1931 Census of India returned a population count of 3.5 million!

The translation is smooth overall, except for a few edges such as translating the Tamil மஹான்- which refers to a Great Saint – as Mahant, which is a Mathadhipati or a Pradhana Upasaka in various Sanatana sampradayas.

As a corrective to the current state of Indian history writing, this is a huge step. Our recommendation is a strong buy and we urge people of influence in educational institutions to make it available to young readers between the ages of 14 to 25, as a reference book and in required reading.

This is published by Bookventure, Chennai, and is available on Amazon.