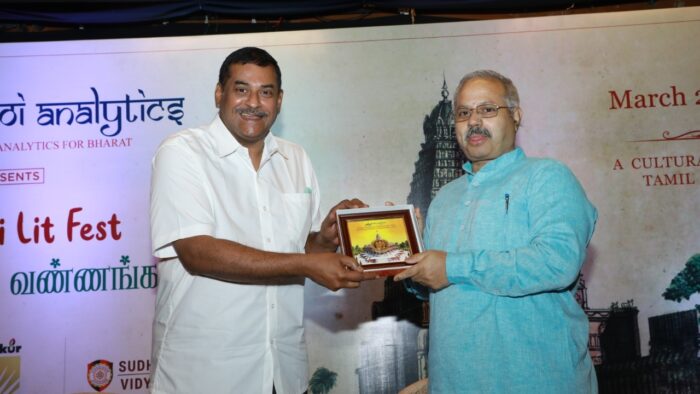 In a completely new venture, the first edition of the Chennai Lit Fest, supported by Indic Academy, concluded a two-day event on the 27th of March, 2021.

Conceived as a platform for the established intellectuals of Tamil Nadu to interact with budding young talent, the event was conducted at Krishna Gana Sabha in T. Nagar.

The event was flagged off in the august presence of Sri Nalli Kuppusamy, foremost among patrons of the cultural society of Chennai, Prof Va. Ve. Subramaniam, senior academician and scholar, Smt Shivashankari, among the literary giants of late 20th Century Tamil Literature.

The curation of the event was performed by Sri Dravida Mayai Subbu and conducted by Indoi Analytics, a Delhi-based advisory and think tank.

In two events, Smt Shivashankari spoke about the situation in earlier times, when Indian authors writing across languages would refer to international, mostly Western novelists, to discuss and analyse as literature. It was to remedy this situation that she began the long project of translating 100 authors – across Tamil, Telugu, Kannada, Malayalam, Hindi, Marathi, Kannada and Urdu – which she dubbed ‘Ilakkiyathaal Inaippom’ – Unite through Literature.

On the second day, in a tete-a-tete with senior editor Sri Maalan, she reminisced with personal anecdotes of such legends as Kamala Das, Mahasweta Devi and Krishna Sobti.

Prof Va Ve Subramaniam spoke about the common threads of culture, lifestyles and values that span across the 2 millenia of Tamil literature, starting from the call of Kaniyan Poonguntran in the Purananuru – Yaathum Oorey – which proclaims universality of humankind to the flashing appearance of Subramania Bharati on the literary life of the Tamils in the late 19th Century.

Among the luminaries that spoke on the first day were Prof Sami Thiagarajan on the broad vista of Tamil Literature of today and a symposium on Media Ethics by Sri ‘Hindu’ R Natarajan, Sri Pa Krishnan, Sri Jayakrishnan Gopal.

Carnatic Music doyen, Sri Neyveli Santhanagopalan, gave an exposition of Thiagaraja Kritis that gave a view into the humanism that is integral to the musical saint’s Rama Bhakti.

In the first day, parallel sessions were run in English. Sri Ratan Sharda, an author and columnist, kicked off the sessions in English with a talk on the diversity and unity of India.

Dr Anil Borkil spoke on the situation before and after Demonetization and its effects. The second day had talks by Sri Sunil Ambekar, on the Roadmap for how Indian Society may navigate the new millennium and consolidate its position among nations of the world.

Following, Sri Prafulla Ketkar, Editor of the Organizer gave a panoramic Vision of Bharat as a Vishwaguru ranging from the old tale of the Gujarati mariner who guided Vasco da Gama to the Samoothiri Raja’s court at Kozhikode to the situation today where India supplies vaccines to countries across the globe. The sessions by Sri Ambekar and Sri Ketkar were both followed by lively discussion and audience interaction on a wide variety of topics, including the nature of secularism, balancing economic, ecological and social justice goals.

Among the interesting insights was Sri Ambekar’s call to drive the discourse by finding commonalities among individuals, cultures and other people.

In response to an audience question regarding the Popper’s Paradox of Tolerance, Sri Ketkar responded that a State can be secular but need not be equidistant from accommodative and exclusive belief systems alike. He also stressed on the need for simply sharing the right nature of stories and asking the right questions to drive a narrative instead of defending question and struggling to catch up with the narrative.

Moving to the other hall, where sessions in Tamil were being conducted, the most popular writer of Post-Modernist Tamil Literature, Charu Nivedita, gave a lively talk on Tamizh Literature of today, the originality and how it adapts.

Ravi Subramaniam shared some sparkling anecdotes including the run-in that veteran public intellectual ‘Karichaan Kunju’ had with a policeman.

An important part of the Chennai Lit Fest was the effort to reach out and recognize achievers across different fields who have not been in the spotlight in the local narrative.

She is an artist, designer, educationist and Silambam practitioner. As an exponent of the Silambam tradition she has won medals in championships at the World Asian, South Asian and Indian levels. She is the recipient of many awards for being a young achiever.

A member of Lok Ayukta and a senior member of the Indian Administrative Service. He has authored many books on diverse subjects. He has written about key messages in the Gita and in our ancient Dharmic texts.

A scholar in Tamil and Sanskrit. She has authored a book on the Gita Govinda and has edited the proceedings of the Swadeshi Indology Conference. She is working on making the Panniru Thirumurai accessible to a less informed readership. She has another face as a publisher of books.

A unique musical duo who have performed across the world in Europe,Asia and India. They have performed with the finest names in the Carnatic Music world and have been mentored by such stalwarts as Padma Bhushan M S Gopalakrishnan. They are recipients of such honors as Yuva Kala Bharati and Asthana Vidwans of Kanchi Kamakoti Peetham.

An educator at the Department of Modern Indian Languages and Literary Studies, Delhi University. She has taken efforts that Tamil language reaches across to people from all over India. Her pathbreaking research on folklore and folk fertility rituals is recognized and honoured at the Chennai Lit Fest.

A Publisher, Author, Critic, Poet, Activist, Play Wright and freelance journalist.  He has started his writing career from his school days, beginning with children’s monthly magazine ‘Kannan’, ‘Mathappu’ and followed it in his college days. He joined as sub editor in a student’s monthly magazine “Then mazhai” (1971-75) He also wrote poems, interviews, film reviews in literary magazines like ‘Kanayaazhi, Kannadasan, Deepam, AQ, Gnanaratham, Sothanai (Hon. Editor.Dr.MGR and Editor-Mr.Naa.Kamaraasan). His short story collection “NENJODU” and book on publication and reading “PATHIPPUM PADIPPUM “have been prescribed in Bharathidasan university, Salem Sarada College for women and in Layola College.

Started in 1991 with a vision to provide high quality school education to children of lower middle class backgrounds in the suburbs of Chennai and in rural regions further afield.

From a small beginning of 5 schools, today, the Trust operates 7 schools in Thiruninravur, Minjur, Periasekkadu-MMC, Mudichur, Manali, Vallur and now in Jamin Endathur, near Madhuranthakam. Between the Vivekananda Educational Trust and its sister organization, the Vivekananda Educational Society, 25000 children from lower middle class backgrounds are being provided high quality education with no compromise in Tamil cultural values.

A Poet and author of seven poetry collections and two anthologies in Tamil Poetry. He is a Publisher and organizer of Kadavu.

A committed teacher and writer, she lives in a village in the Tiruvannamalai district of Tamil Nadu and has written 7 collections of poetry, 2 novels and 3 short story collections among other publications. She has brought out concerns of women in simple and understated feminist style.

A senior practitioner of Kuchipudi and Vilasini Natyam, trained under Dr. Uma Rama Rao for Kuchipudi and Padmabhushan Swapnasundari for Vilasini Natyam.  Anupama has given more than 800 performances in India and abroad. She is a Vishaarad in Hindustani music from the Akhil Bharateeya Gandharva Mahavidyalay, and an author of two books, based on the Telugu Pada poets, Annamacharya and Kshetrayya. Anupama has her own institute of Dance named ‘Anubhav Centre for Performing Arts ‘, where she trains students for solo and group presentations.

(This report was first published by Organiser)