A Short Note On Bauddha – Astika Encounters Over History 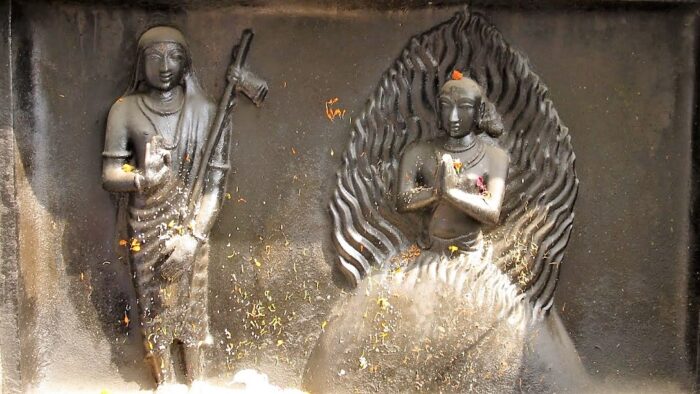 On this third day of the Skanda Sashti Vratam, I prostrate at the lotus feet of Subramanya, who took avatara as Kumarila, the Bhattacharya who re-established the Vaidika Matha

These words are submitted at the holy feet of Thirumuruga Kripananda Variar, who, by his Muruga Bhakti, rose to be called the 64th Nayanmar.

Over the millennium-long period when the Bauddha faith had a following in Bharatavarsha, the Bauddha faith, there must have been innumerable occasions where the faith came in conflict with the older Vaidika beliefs and practices.

Over the last few decades, a narrative is being built that Vaidika beliefs gained ascendancy and then suppressed other heterodox systems through persecution and violence. A specific instance is a story about the Mimamsaka Acharya, Kumarila Bhatta, who debated and won over many Buddhist scholars. The scholar Upinder Singh describes him as cutting off Buddhist and Jaina heads with an axe and powdering them in a mortar and pestle. We searched for this claim and found that it was reproduced verbatim from a doctoral dissertation submitted to the University of British Columbia, Canada. This claim, in turn, is referenced from a book published in 2000 called – Conquest of the Four Quarters: Traditional Accounts of the Life of Śaṅkara. While the doctoral thesis claims it is on page no 143, we note a mention in page no 86. All biographical details about Kumarila Bhatta can be gleaned primarily from the the major Shankara Digvijayam accounts and are reproduced here.

Kumarila Bhatta is said to have lived incognito among the Buddhists, learning their doctrine and eventually using their own arguments to defeat them.

A few things about his life story come to the forefront

The picture that emerges of Kumarila Bhatta is vastly different from what has been portrayed by the Western scholars.

Jonathan Bader’s book quotes this as a reference from the Madhaviya Shankara Digvijaya, which is erroneously described as a work composed between the sixteenth and eighteenth centuries. Tradition, however, has it as a work composed by the sage Vidyaranya in the fourteenth century. The Shankara Digvijaya has a rather dilatory description of Kumarila cutting the tree of Buddhist teachings, branch by branch, with the axe of his dialectic arguments. The mountains of Bauddha philosophy were said to have been ground to dust by the thunderbolts of Kumarila’s arguments. In all of this, there does not seem to be any primary evidence for violence perpetrated on Bauddhas by Kumarila. To quote this as evidence of Vaidika violence upon Bauddhas is somewhat far-fetched, in our opinion.

On the other hand, history is replete with instances of Bauddhas persecuting Astikas. The earliest records come down to us from the Chachnama, in which Buddhist populations in Sindh were said to have collaborated with Muslim invaders against their Brahmin rulers. In the 20th Century, Myanmar saw frequent riots between Hindu Indians and Buddhist Burmese, which culminated in the World War 2 exodus of Hindus from Burma to India.

Later in the 20th Century, Sinhalese Buddhists carried out pogroms resulting in the exodus of Tamil Hindus from Sri Lanka all over the world.

In both Myanmar and Sri Lanka, religious conflict was part of the reason for the conflict.

Given this background, how, then, do we explain the subsumption of Buddhism into mainstream Hindu beliefs in India?

We would like to draw attention to the hallowed tale of Shakya Nayanar, one of the 63 Nayanmars of Shaiva Siddhanta. Shakya Nayanar was a man from the Vellalar clan, which is famed as the upholders of Shaivism in Tamil lands. He is said to have been drawn by the teachings of Buddha in his youth, took to the cloth and studied Buddhist philosophy in Kanchi. However, over time, his heart was drawn to the infinite grace of Sadashiva.

While still in the outward form of a Buddhist Bhikshu, he became a staunch devotee of Shiva. He vowed to never take his sole meal of the day without a darshan of a Sivalingam. When he did this for the first time, he was so overwhelmed by bhakti that, not knowing what to do, he threw a stone at the Shiva Lingam. He continued this as a daily practice for years.

In his infinite Grace, the Lord accepted this as a veneration and raised him to Kailasha.

This, in a nutshell, describes the sheer depth and grace of the Hindu faith that eventually subsumed Buddhism.