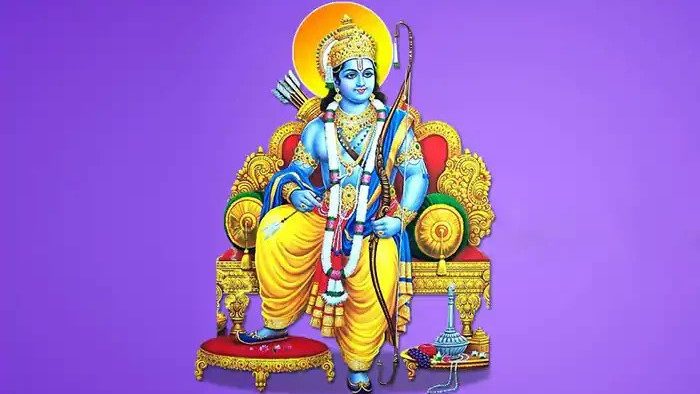 The South responds to Shree Ram differently from how the North does.
For sure, we have hundreds of temples for him, and Thyagararaja Swamy’s kritis (“I will sing of none but my Ram,” said he!) are perennial favorites. At street level though, the South can scarcely match Ganga kinare’s ardor for Shri Ram. I didn’t discover this till I was nearly 60 yrs.

The first time I was in Kashi in 2000, I was struck by how most everyone sang out ‘Jai Shri Ram!’, to anyone that met their eye. This doesn’t happen in the South. I went looking for Shri Veer Bhadra Mishra to interview him for a story on his action plan for cleaning the Ganga. He wasn’t at home.

A man walked up to me to soften my disappointment: “Now that you are here why don’t you visit Tulsi Ghat? It is right here.” he suggested. And so it turned out that I was sent to discover what Shri Ram meant for this civilization. The ghaat was right across the street. I climbed a flight and arrived at a tiny Hanuman temple. A blind old man sat there chanting Ram Charitmanas. The Pujari went about his chores. There was no one else. 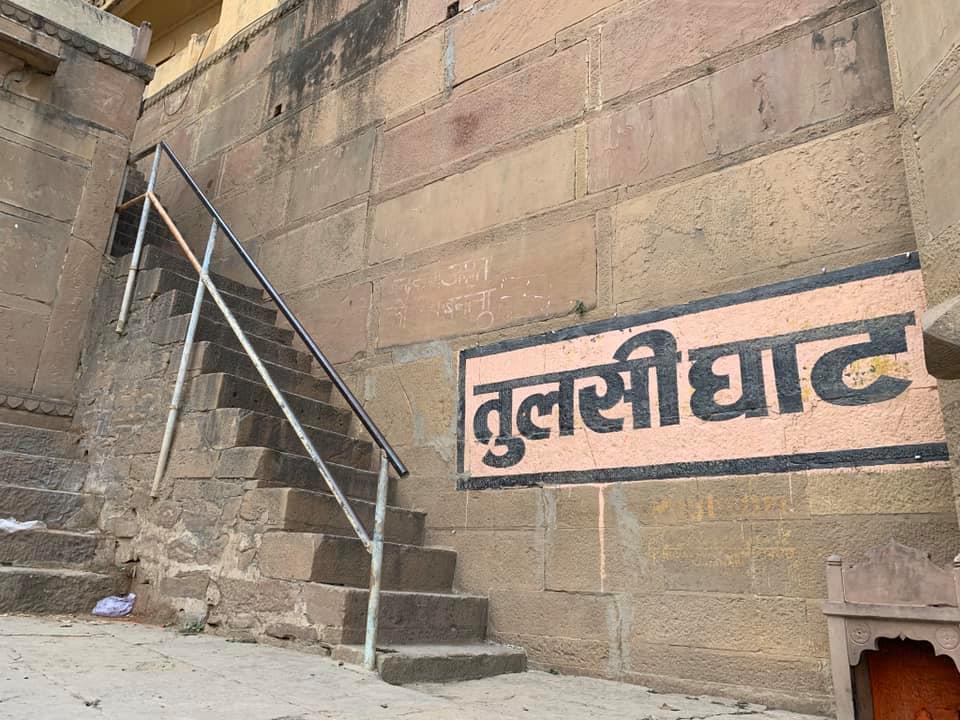 I sat a long while bewitched by the lilt of the chant. I climbed further up. There was a row of windows looking over Maa Ganga, where it is said that Goswami Tulsi Das Ji often sat seeking inspiration for composing his Ram Charitmanas, the People’s Ramayana. I learned that the first sound he had uttered as a baby was ‘Ram’, and hence he was named Ram Bola. He, of course, ended up putting Ram ka Naam on the lips of all Hindi speakers! 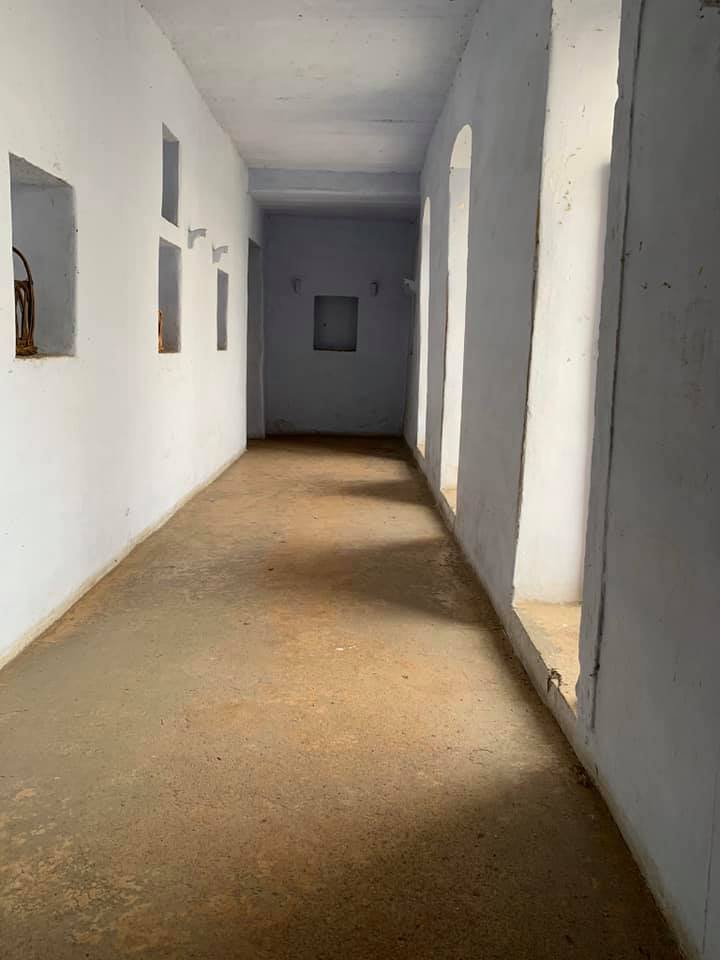 Goswami Tulsidas sat by these windows

I climbed back down to the little Hanuman Mandir. The blind man had ceased his recitation, The crowd had grown to about ten now. The Pujari had readied everything for the evening aarati. All was quiet for it to begin.

I found a place for myself near the steep stairs to the river bed. All of us waited. Then it happened: There was a perceptible tremor on the stairs. Two sturdy men were bounding up at great speed. There was a menacing air about them. I instinctively shrank in my corner. They stood quietly while the rest of the puja was in progress. I couldn’t take my eyes off the giants while pretending I wasn’t looking.

When the priest came around with the Prashad, these strongmen bent low for theirs. Their piety and childlike expressions were incongruous with the size of their frames. I have always been charmed by the endearing North Indian custom of placing the left palm behind one’s head while proffering it for tilak to be applied.

The two then opened a cardboard box of small laddus, which they then went around distributing to everyone with great kindness on their faces. That done, they clambered down the stairs and were gone in a minute, just as quickly as they had sauntered up.

I turned quizzically to the man next to me. He explained with a smile: “Those two are brothers, milkmen from a village about 15 kilometers away. They are Hanuman Bhakts and kushti pahelwans. “Every morning before dawn they cycle down from their village to Kashi on their bicycles, heavy milk cans slinging from their bicycles.

Delivering them to the halwais in the city, they cycle back to their village. They repeat the routine in the evening. Once the evening milk is delivered, they arrive at the river bank here, to join their akhaaDa, gathered for kushti practice.

They wrestle for an hour or so, with their Guru watching. And then they come up here to worship Hanuman Ji and distribute their offering on His behalf. Right now they’d be cycling back to their village. They have stuck to this routine every day since they were young boys. They believe it is Hanuman Ji who gives them strength and protection.”

What an amazing social cohesion Goswami Tulsi Das Ji has brought to Hindu society by simply celebrating the tale of Shri Ram!

I realized the difference this has made: Kamba Ramayanam in Tamizh is a lyrical beauty but it is not accessible to commoners. We have no Tulsi’s peer. I returned home intrigued by the city that warps your sense of time, but the Ram Janma Bhumi fervor had not gripped me yet. That didn’t happen for another 16 years.

I had now become a member of Indic Academy (IA). IA works for an Indic renaissance by promoting connections and associations among people who believe in Indic civilizational values. In 2017, historian Dr. Meenakshi Jain’s two books Flight of Deities and The Battle for Rama were being finalized for publication. The Ram Janma Bhumi case was coming up for hearing in the Supreme Court.

IA had arranged a daylong workshop in Delhi for its members to understand the issues involved. In the Workshop, Prof. Jain shared her research findings with the small group, an event I regret missing. It left our members who attended it shaken to the core. Many were in tears. I did not know of that event until a poem composed by Dimple Kaul, who was there that day, was commended on by many in our private email group.

It was in Hindi. I requested her to record it as an audio file for me and she obliged. Her controlled anger surprised me; I had known her to be an ever-cheerful person. I began to browse Meenakshi Jain’s videos and eventually read both her books. I highly recommend both books.

In brief, they are stories of our ancestors’ devotion to Dharma. Dr. Jain catalogs the response of ordinary Indians to savage Islamic iconoclasm. Despite their poverty and threat to life they never gave up. They traveled vast distances to carry deities away to safety. I learned that the Ram Leela tradition began in Moghul times, to enable worship without deities.

They rebuilt temples every time they were destroyed. After the Ayodhya temple was razed to the ground by Babur, and a mosque rose in its place Hindus still kept returning to Janmasthan. They never stopped believing that Prabhu Ram was born there. Their unbroken folk memory would not persuade them otherwise. Muslims in fact referred to Babri Masjid as Masjid-e-Janmasthan.

Travelers from overseas have recorded over centuries how Hindus have arrived at Ayodhya in unending streams to worship and pay respects.  When the State made the Janmasthan inaccessible, pilgrims would try to bribe officials to gain admission for worship from afar. Their Ram had that hold. Meenakshi Jain Ji’s research works are in fact a tribute to the humble folks of this land.

I am not a devout Hindu; only a strong believer that this country is fair-minded because it is Hindu. That makes me proud of being a Hindu. Why should Hindus’ gentle ways be mocked, provoked, humiliated, and attacked? Based on literary and archaeological evidence, the claim to a temple for Shree Ram at Ayodhya would seem justified to any fair person.

Why was the claim not conceded long ago? I have since concluded that there was enough reasonable Muslims who were willing to settle the dispute in Hindus’ favor.

It was a cabal of Left historians, lawyers, journalists, and politicians that labored hard to thwart a settlement. They falsified evidence and encouraged mockery of the Hindu longing for a temple. Watching this video featuring Meenakshi Jain Ji is revelation on the games dishonest ‘historians’ have played on Hindus in the last 70 years.

Their overkill is what made it a political issue, that in fact led to the rise of the BJP. It was BJP alone that promised that a temple for Shri Ram would be built at Ayodhya. What might be the reason for the cabal’s anxiety about a temple being built? Whatever it may be, it was that unnecessary anxiety that broke the deadlock. A long humiliated people found a way to organize themselves to force the issue to a conclusion in the least violent way possible: that was what the Babri demolition was about.

Another poignant experience of an ardent devotee of Sri Rama is by Dimple Kaul on her visit to Ayodhya in 2018. Do listen without fail and see if you can hold back your tears. Ponder the indignity inflicted on gentle people who arrive from across the country to simply adore their beloved Ram.

She spoke for millions of voiceless pilgrims, whom she found accepting the degradation of a once sacred place as normal. Can there be greater enslavement of a civilization? I have heard it a few times. It hardened the casual Hindu in me into a very angry one. To me, the Supreme Court verdict more avenges the humiliation of a billion people than grants a mere legal victory in favor of a temple for Shri Ram.

I went utterly quiet and overwhelmed on hearing the verdict. No exultation; just an immense calm. What a long struggle it has been. But what is half a millennium for land such as ours which has outstared every evil eye!

Earlier this year, I was back in Kashi, a fifth of a century after my last visit.
I went directly to Tulsi Ghat. The landing where a blind old man had sat chanting Ram Charitmanas, had a young man doing it. 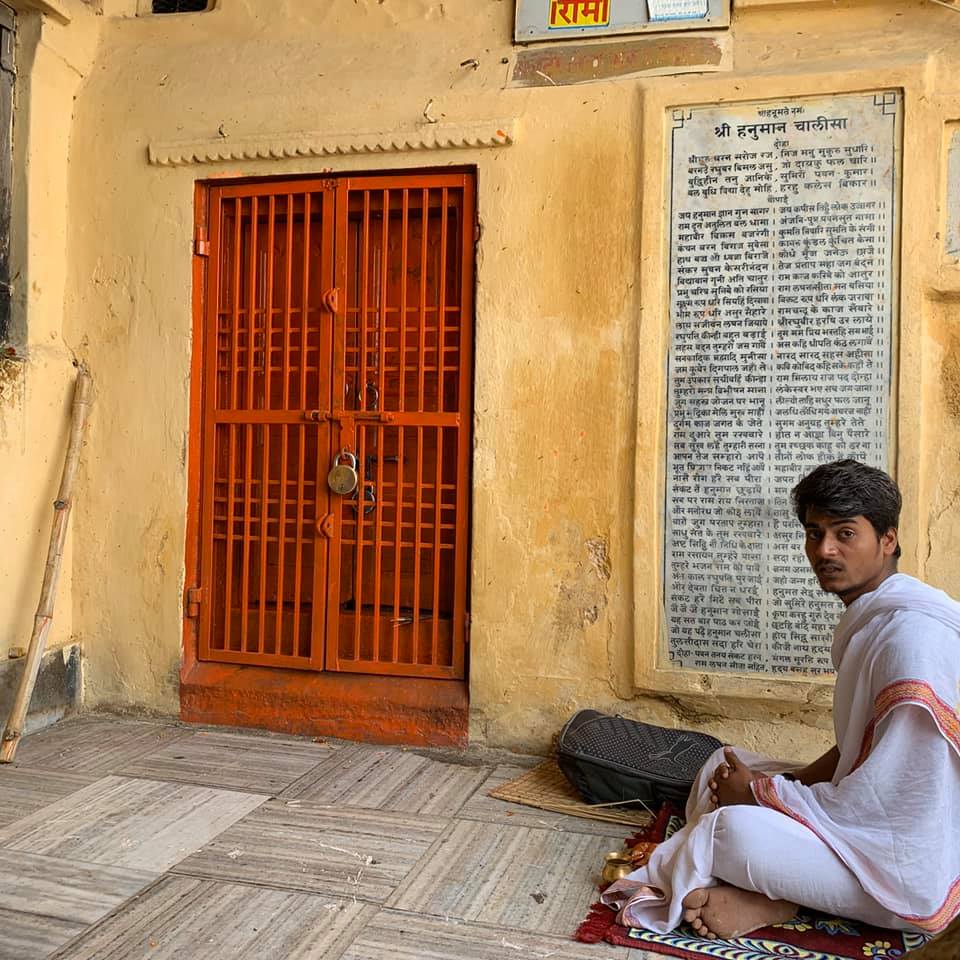 I doubted if it had ever stopped since my last visit, or for that matter since Tulsidas Ji wrote those words. I climbed up further. I stood by the tiny space which sufficed for the poet as a place to write and rest in. There is a portrait of him placed on his bed. In it, Raja Todar Mal is seen fanning him. This is who we are. 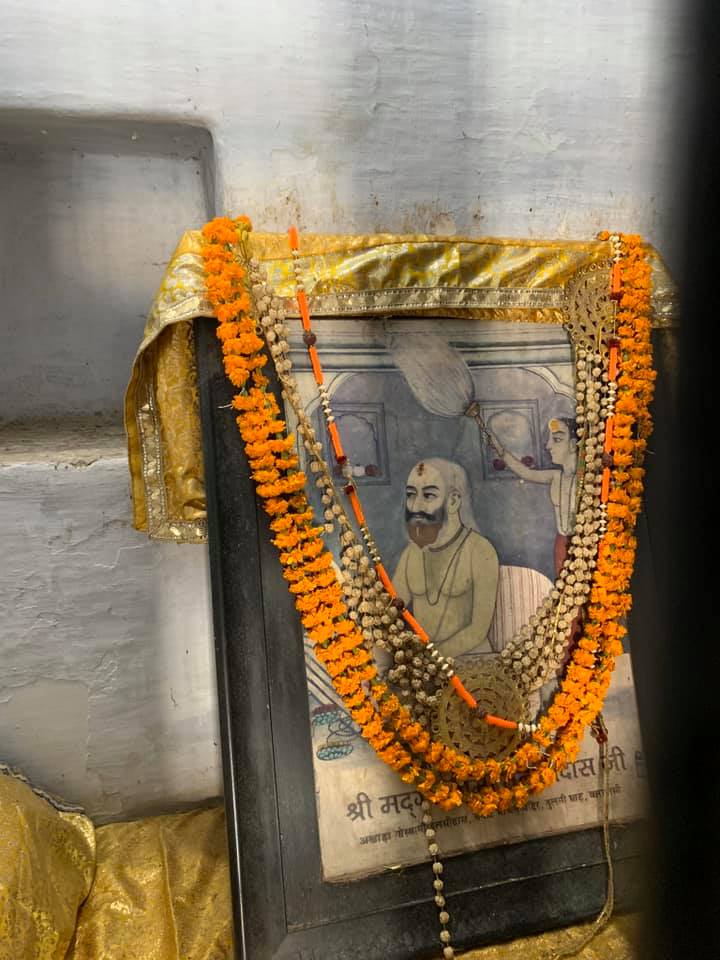 Tulsidas being fanned by Raja Todarmal

In our hierarchy, royalty serves learning and wisdom. I slowly wandered towards the large windows that Tulsidas Ji used to sit by. I sat for long and looked out the way he might have. Maa Ganga flowed on far below. He had heard it speak to him the promise of Shri Ram. To me, it only murmured comfortingly, as a mother would to a child.