The Rāma Story and Sanskrit in Ancient Xinjiang

Gāndhārī inscriptions have been found as far east as Luoyang and Anyang in Henan province in Eastern China which attests to the vastness of the influence of Sanskrit. Europeans in recent centuries called the whole region Serindia, indicating the meeting place of China and India. 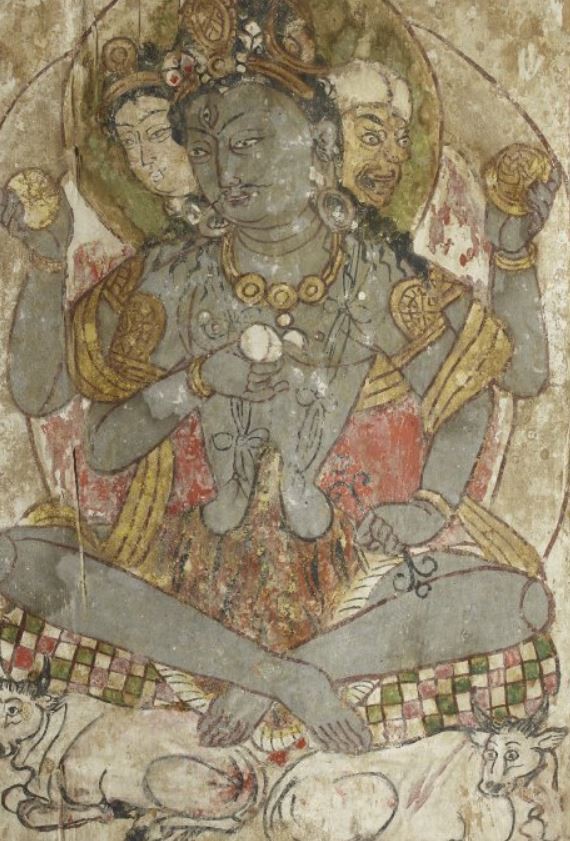 Most people do not know that until about a thousand years ago, the Tarim Basin (northwest of Tibet, which is the part of Xinjiang below the Tian Shin Mountains) was Indic in culture and it was a thriving part of the Sanskritic world; its people spoke the Gāndhārī language which many see as descended from Vedic Sanskrit, and Khotanese Saka, which is also closely related to Sanskrit. Perhaps the region to compare it most is Kashmir, to whose north it lay. There was also much interaction between the two regions with many scholars traveling from Kashmir to Khotan, and silk culture is believed to have passed from Khotan to Kashmir and then into India. 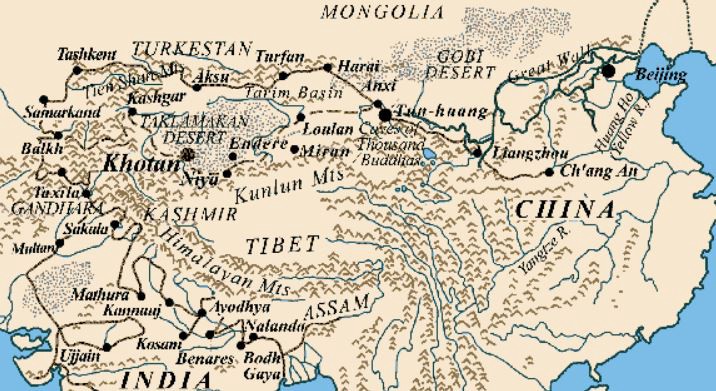 Gāndhārī inscriptions have been found as far east as Luoyang and Anyang in Henan province in Eastern China which attests to the vastness of the influence of Sanskrit. Europeans in recent centuries called the whole region Serindia, indicating the meeting place of China and India. 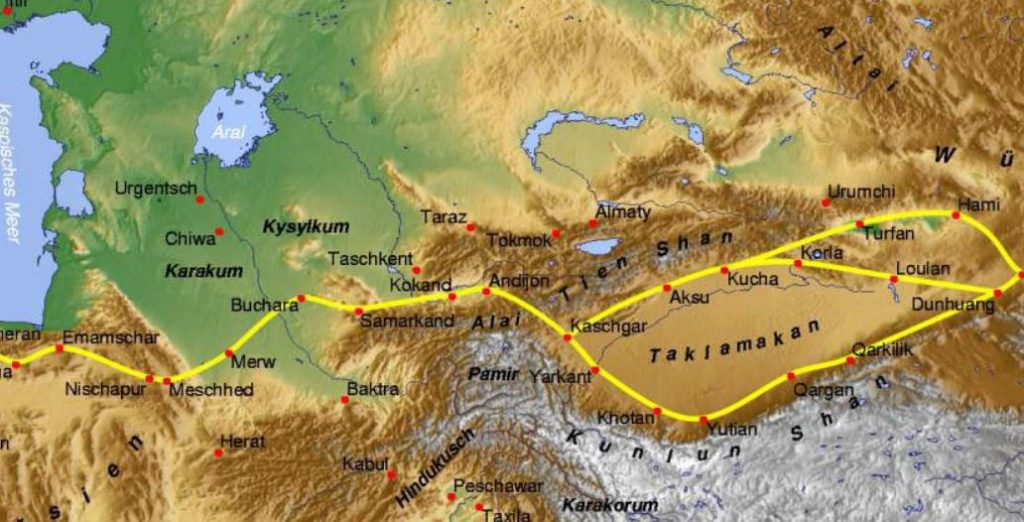 Khotanese kings were Mahāyāna Buddhist but as we know this sect incorporates Vedic and Tantric systems, with all the devas such as Indra, Śiva, Viṣṇu and Sarasvatī, and just places the Buddha at the head of the system (as in Vidyākara’s Treasury). There was also Krishna worship in Khotan and we find the Rāma story in Khotanese language, of which there is also a Tibetan version.

The Buddhists put a characteristic spin on the Rāma story, which has had immense power on the imagination of the people all over Asia. In their variant, Rāvaṇa, after losing the war is spared his life, and becomes a worthy Buddhist to accord with the Laṅkāvatārasūtra, set in Laṅkā, in which the Buddha instructs Rāvaṇa. (Likewise, in order not to lose followers of Rāma, Jain texts show him as a faithful Jain.)

The Khotanese Rāmāyaṇa is not the standard Rāma story. In it Daśaratha, who is called Sahasrabāhu (“thousand-armed”), fights with Paraśurāma and gets killed, and his sons Rāma and Lakṣmaṇa are saved by a queen. When they grow older they slay Paraśurāma in revenge and become masters of all Jambudvīpa.

Meanwhile, the Rākṣasas are ruled by Rāvaṇa (Daśagrīva). A daughter is born to his chief queen and it is prophesied that she will be the cause of his ruin. So he orders the girl, Sītā, to be cast upon the great river in a box. A ṛṣi chances upon the box and raises the girl lovingly. This is of course somewhat similar to the account in Adbhuta Rāmāyaṇa.

Later in the story, Rāma, Lakṣmaṇa and Sītā are in the forest and as the brothers leave to hunt, Lakṣmaṇa draws the magic circle around Sītā for protection. Daśagrīva sees this lovely woman from the air, and not knowing she is his own daughter, approaches her and persuades her to step out of the circle to abduct her.

There is war and Dasagriva is defeated. But in the end Rāma doesn’t kill him. Here’s the original with translation that gives a sense of the language:

the sons of Sahasrabāhu escaped.

Rama was among the heroes. (Bailey translation)

At the end of the story, the Buddha Śākyamuni is identified with Rāma and Maitreya with Lakṣmaṇa. Daśagrīva comes to the Buddha and receives instruction in the Dharma as in the Laṅkāvatārasūtra.

The traditional date for the founding of Khotan, on the southern and the more ancient branch of the Silk Road, is the reign of Aśoka Maurya (3rd century BCE). It was ruled by Buddhist kings until it was conquered by the Muslims in 1006. Some of the kings mentioned in the “Prophecy of the Li Country”, composed in 746 CE, dealing with events of the recent past are Vijaya Kīrti, Vijaya Saṅgrāma, Vijaya Dharma, Vijaya Saṃbhava, and Vijaya Vāhana.

Many Khotanese cities had Sanskrit names. For example, Khotan in Sanskrit was Gaustana गौस्तन and the modern city of Kashi (Kashgar) was called Śrīkrīrāti (in Sanskrit Śrī+krī+rāti, श्रीक्रीराति, ‘Glorious Hospitality’). Kashgar itself appears to be the popular name from Sanskrit Kāśa+giri (काशगिरि, bright mountain). The Khotanese called their language hvatanai ह्वतनै which later became hvaṃnai ह्वंनै; this is equivalent to the name deśī that is used for language in India (vatan, from svatana = deśa).

The liturgical texts in the region were written in Buddhist Hybrid Sanskrit, whereas those in the region of Krorän (Chinese Loulan), an important oasis further east of Khotan, used Prakrit in administration. A third language called Tocharian was also used both to translate Buddhist texts and as an administrative language. Many Sanskrit texts of India remember the general region as Tuṣāra or Tukhāra, and it retains currency as a popular proper name.

Another major language was Khotanese Saka, which is sometimes seen as an eastern Iranian language (that is emerging from the region just west of Kashmir). But since the large number of the Śaka who ended up in India as rulers or soldiers have always spoken the more easterly Indo-Aryan languages, I personally believe that the Saka languages were largely Indo-Aryan, although as one traveled further west, the Iranian elements increased.

That Khotanese Saka was principally a Indo-Aryan Prakrit is reinforced by the fact that the texts are in Indian scripts of Brāhmī and Kharoṣṭhī. Many of these documents were collected in archaeological explorations to Chinese Turkestan by Aurel Stein, who is also known for his translation of Kalhaṇa’s Rājataraṅginī. Stein came across tens of thousands of manuscripts from 5th to 11th centuries in various sites including the Caves of the Thousand Buddhas in the Kansu (Gansu) province. One of the principal scholars who edited and translated many of these texts was H.W. Bailey and this literature remains a popular field of study for scholars.

Aurel Stein says in his celebrated Ancient Khotan: “There was little to prepare us for such overwhelming evidence .. on the large place which Indian language and culture must have occupied in the administration and daily life of this region during the early centuries of our era. That Sanskrit Buddhist literature was studied in Khotan down to the end of the eighth century A.D. has been proved beyond all doubt by the texts in Brāhmī script which I excavated.”

The mummies of Tarim Basin

The discovery of the Tarim mummies that go back to 1800 BCE strengthen the view that the region was Sanskritic. The earliest mummies in the Basin are exclusively Caucasoid, and the American Sinologist Victor H. Mair has said: “Because the Tarim Basin Caucasoid corpses are almost certainly the most easterly representatives of the Indo-European family and because they date from a time period that is early enough to have a bearing on the expansion of the Indo-European people from their homeland, it is thought they will play a crucial role in determining just where that might have been.”

Some have suggested Europoid identification to explain the blonds and red-heads among the mummies, but there is no need to travel thousands of miles to Western Europe to explain this; Kashmir, just south of the Basin has plenty of red-heads and blonds.

One of the DNA studies notes that the population had “relatively close relationships with the modern populations of South Central Asia and Indus Valley, as well as with the ancient population of Chawuhu.” This is perfectly reasonable if the original inhabitants of the region were from Indus Valley [code for India] and they left a genetic trace in the region.

The end of a civilization

Protected by the Taklamakan Desert, the Tarim Basin world survived attacks from steppe nomads for a long time. There was a break in the tradition of Buddhist learning during the social and political turmoil under Tibetan rule from after 790 to the mid-9th century. Things began to change with the arrival of Turkic immigrants, who included Buddhist Uyghurs and Muslim Karluks, from the collapsing Uyghur Khaganate of modern-day Mongolia in 840.

The Islamic attacks and conquest of the Buddhist cities east of Kashgar was started by the Turkic Karakhanid Satok Bughra Khan who in 966 converted to Islam. Islamic Kashgar launched many jihads which eventually ended in the conquest in 1006 of Khotan by the Karakhanid leader Yusuf Qadir.

The end of civilization makes one question assumptions about life. Going beyond ephemeral loves and heartbreaks, does one see it as parikalpa (false assumption) and śūnyatā, as scholars had argued? There was no time for philosophizing, and fearing the worst, monks during the reigns of Khotanese kings Viśa Śūra (r. 966–977) and Viśa Dharma (r. from 978) began to copy texts which were sealed in caves to be preserved for posterity. What followed was a period of destruction and vandalism equaling the worst elsewhere in the world. At the end of it, the populace retained no memory of their collective past and until the discovery of the mummies and the literature they did not know that their ancestors spoke Indian Prakrits.

The end of the civilization was commemorated by the Karakhanid writer Mahmud al-Kashgari in a short poem:

We went out among their cities,

We tore down the idol-temples,

We shat on the Buddha’s head!”

This article first appeared here and has been republished with permission from the author.