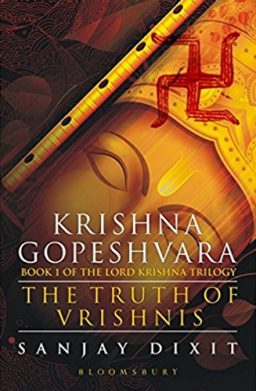 Presenting an ancient Indian Puranic story with a contemporary narrative in the background has been a literary tradition that is unique to Hinduism. Continuing in the tradition, is Krishna Gopeshvara written by Sri Sanjay Dixit. The story of Krishna is narrated in the background of the clash between two narratives, one being an evolving civilizational narrative and the other seeking an all-out political dominion. Published by Bloomsbury India, the book is the first instalment of the three part Lord Krishna trilogy. The sequels, titled Krishna Yogeshvara and Krishna Gyaneshvara are slated for release in 2019 and 2020 respectively.

The beginning arrests the reader’s attention, starting with the mayhem that follows Kansa’s death in the hands of Krishna in Mathura. The widowed wives of the Yadava Lord travel to their father Jarasandha. The picturesque geographical detail backed by rigorous research brings the image of ancient Bharata to the reader’s mind and does not hamper the pace. At this juncture, author Sanjay Dixit makes an interesting departure from the traditional narratives.

The story of Krishna’s birth and childhood is narrated to the outraged Jarasandha as a part of his Purvapaksha process. While it throws a lot of light on the ancient strategizing practices, an avowed Krishna bhakta could wonder about the Adhikara of an Adharmi like Jarasandha to listen to the story of Krishna. Nevertheless, Jarasandha promises to be a formidable force that endangers the Yadavas after his son-in-law’s death.

The story of Krishna’s birth and childhood is a delightful part of Bhagavatam. The author has deployed an intelligent mix of rational retelling and creative liberty in reconstructing Krishna’s story. Especially Kansa’s character arc from an errant and entitled son of a Noble to a politically misled, ambitious zealot is a telling example of how predatory cults feed upon the weak minded and then seek to take over civilisations. The thought process that went behind conceiving the Kutil Muni’s character is laudable. Any more description of this intriguing Kutil Muni might spoil it for the reader. But I can say that he is the result of the author’s masterful imagination combined with observation of a certain present day cult and of the tumult in the present day India.

I choose to not dwell upon the storyline because it is not the ‘what’ but the ‘how’ of the narration that is mesmerizing. The nuggets of philosophical discussion are sure to make the reader pause, debate with self, ruminate and then get back to reading. While it is possible to finish reading the book in a couple of sittings, the author has given a lot to thoughtful readers to ponder and ruminate. I would in fact recommend Krishna Gopeshvara for an enchanting slow reading, especially to those who are interested in deeper exploration of Krishna’s personality.

Writing about Krishna as a human being (as opposed to someone with supernatural yogic powers) has been explored by critically acclaimed writers like SL Bhyrappa (Parva), KM Munshi (Krishnavatara) and Shivaji Savant (Yugandhar). Nonfiction theses have been written by the likes of Bankim Chndra Chaterjee (Krishna Charitra) and Dr.Bhagavan Das (Krishna – A study in the theory of Avataras). Even when portrayed as a human being par excellence, Krishna remains that proverbial elephant being examined by the blind children. There is always something new to the table brought by each writer and story teller and Gopeshvara Krishna is a great addition to the august list. Sanjay Dixit portrays Krishna not as a normal human being, but as a prodigy who is into deep philosophical inquiry from a very young age and blooms into a true Sthita Prajna (if I may use the term) with his astute focus on the nuances of Dharma and realisation of divinity within. Unlike his literary predecessors, Shri Sanjay Dixit has chosen to portray the story with a narrative that is strikingly similar to what we see happening in present day India. One should read the book to identify the similarities!

I have promised to not reveal much about the storyline. But Radha as portrayed by the author compels me to break my word. KM Munshi opines that Radha is the problem child of Indian imagination. While her name does not find a single mention in the ancient texts like Bhagavatam and Mahabharata (Harivamsham), it is almost impossible to imagine Krishna without Radha. Traditional scholars strongly opine that Radha is the Goodha Nayika or the secret heroine of Krishna’s life. It is a strong belief among the Bhakti proponents that the Darshan of Radha is even more difficult to achieve than that of Krishna himself.

The author has succeeded in executing a unique interpretation in portraying Radha as a spiritually awakened woman who dons the role of Krishna’s Guru as opposed to a pining lover as shown in popular post-Jayadeva interpretations. While the introduction of Radha bears a striking similarity to that in KM Munshi’s Krishnavatara, Radha of Krishna Gopeshvara has many surprises for the reader (way too many!). The scene of combat between Radha and Krishna (Yes, you read it right!) was beyond intriguing and is something to be read and meditated upon. The Radha-Krishna’s exchanges in this book have multiple layers that connoisseurs would not want to miss. The ensuing incidents like Rasa Lila have been dealt with a finely honed sensibility.

Promising a more action (and philosophy) packed sequel, the story proceeds to end with Krishna’s killing of Kamsa and a dramatic decision by Radha to leave Barsana for Vrindavan without telling Krishna. As the story is presented as a clash between narratives, even the political cult of Jhankal that would have wooed Kamsa to perpetrate heinous crimes also finds its successor and one can expect an equally gripping sequel to follow.

As a lover of Krishna I badly await the launch of the next book in the series. There is not a single dull moment in the book. Geography of ancient India, rich tapestry of Hindu philosophy, delightful adventures of Krishna, lively dialogue, everything comes together in a narrative that would stay with the reader for long. Krishna Yogeshvara and Krishna Gyaneshvara are the titles that would follow in the trilogy.