Isavasyopanishad By Nithin Sridhar – From The Text To The Tradition 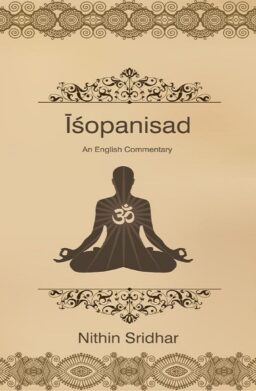 Nithin Sridhar, one of the prominent Indic writers and champions of the Bharateeya Shastreeya Parampara, has written a new book. He has a special eye for what our Shastras have to say on various aspects of material life. This one, though, is on an Upanishad. At the outset, it seems like a shift in his focus, a leap into the Paramartha. However, from this review it will be clear that a singular focus and concern is driving all his writings. The ‘Paramartha Chintana’ is very much part of ‘Purushartha Chintana’. Bharateeya Parampara does not see the two any differently. The ‘Iha’ and the ‘Para’ are always together. The former is organized towards the latter. The latter shapes the former. That alone does not explain the choice of this book. That is the crux of this review.

The Structure of the Book

Generally, the structure of a book is not very important. A Review must always focus on the experience it offers and its exploration. The structure must be presented from within the book. However, in this case, the structure requires a distinct mention and presentation, for there is something unique in it. The first half of the book consists of a chapter on each verse. Every verse is presented with word to word meaning, a summary meaning, detailed analysis in terms of philosophy – connecting it with the larger Vedic universe and finally a summary of everything presented. The second half of the book is a comprehensive philosophical exposition of the Upanishad in terms of its theme and paths that are available to seekers.

Most traditional texts generally tend to have this structure in one way or the other, but the book brings it with a structure, consistency, sophistication and smooth flow. [An aside – Generally, every chapter has references embedded within, which nudges the reader to explore further, rather than ones at the end which nobody ever notices]. But the biggest advantage of this structure is that the philosophy is revealed gradually. At once, the book connects with summary readers, intellectual readers and technical readers. There is something for the first time reader and a lot more for the repeat reader – the genuine seeker. The verse, the meaning, the Vykhyana and then the philosophical summary being present together provides a very rich reading experience. It is intense and dense without being a burden.

A brief about the Upanishad

It is difficult to reflect upon the experience of this book without some indulgence on the Upanishad itself. Isopanishad is the smallest of all Upanishads. It has just 18 Verses. The first 10 Verses explain the nature of the Supreme and the Seeker. The Mantras 11-14 also present the Seeker but in ways that are relatable in the material world. The Mantra 15-18 is a complex combination of Metaphysics and the nature of the Seeker.

This organization of the Mantras is important. One expects the nature of the first 10 Mantras in Upanishads. Other Upanishads too contain such an exposition, often in great detail. But, the next 8 Mantras are very unique and they present guidance to a Grihastha on how one must approach the Ashrama from the standpoint of the Seeker. Thus, the Upanishad becomes a Purushartha exposition in general and Paramartha seeking in particular, at the same time. Ideally, this must be the first Upanishad that one must get started with so that one does not misunderstand Upanishads as encouraging a disconnect from the Grihasthashrama or as being aloof from it. The Parampara is very clear that the Iha-Para integrity is what Bharateeya Sanatana Dharma stands for. That is its unique perspective. That is the importance of Ishavasyopanishad. The structure and the presentation of the books makes this perspective naturally emerge from the Upanishad itself, without the author having to indulge in extensive deductive logic – for such a thing is unnecessary in the context of this Upanishad. The book’s achievement is to present the Upanishad with authenticity to the text, structure and tradition – in perspective and in the flow of the parampara. It is the Upanishad that triumphs and hence the author – not the reverse. This achievement is reflected in very rich appreciation from luminaries such as Dr. David Frawley, Swami Swatmavidyananda, Swami Chidrupananda, Swami Tatvamayananda, Swami Samarpananda, Swami Brahmaprakashananda, Dr. Aravinda K Rao, Acharya Sadananda, Vidvan V Subramanian.

In a short but brilliant preface Shri. Chittaranjan Naik says “The second part of the book explains in a succinct and concise way the entire terrain of Sanatana Dharma” – this is very true without any exaggeration. “While the path of nirvrutti-dharma has been explained by most modern commentators of the upanishads, the path of pravritti-dharma/kramamukti is an area that has been sadly neglected by most modern scholars as well as commentators. Nithin Sridhar fills this vacuum with a comprehensive coverage of the path”. There cannot be a better praise and better review of this book than this thoughtful preface by the renowned philosopher of our times Shri. Chittaranjan Naik. The exposition of the Nivrutti-Dharma through the Pravritti-Dharma for the Grihastha is the true differentiator of this book, which is also of the Upanishad. The emphasis belongs not only to the Upanishad but also to the Parampara. But the presentation, highlighting entirely belongs to the conviction, scholarship and clarity of the author. For this Nithin Sridhar deserves immense appreciation and respect.

A Gateway to the Upanishad Parampara and the Sanatana Dharma

No Upanishad stands in isolation, just as no Sukta of Samhitas does. Together they form a body of integrated Universal Principles, Ontology and performative knowledge. Every Sukta, Samhita, Brahmana, Upanishad is closely related to the other. Each is all the time deriving or relating or mirroring the other. Together they form a complex web of concepts – the Ontology of Bharateeya Parampara. For this, one has to see one Upanishad in the light of Mantras in other Upanishads. Part 2 of the book presents the Isopanishad in the light of other Upanishads. Thus, it presents a way for a Seeker to entire the comprehensive world of Upanishads through one Upanishad. Once again, this is a unique possibility of Isopanishad as it has just 18 Mantras. This, of course, could not have been achieved without the brilliance of the author. This may not be easy to achieve with other Upanishads either.

This also brings a different challenge. Dense with concepts, the book runs the risk of becoming too heavy for the curious general reader. But Nithin Sridhar has managed to overcome this complexity with simple writing that flows like a seamless stream. Without any hesitation, it can be said that the book can be a good first step for somebody starting with Upanishads – with some introduction apriori to the tradition through Itihasa-Purana. This entirely is the achievement of authorship. It is a combination of the strictness of an academic paper and compelling, gentle sweetness of an essay – something that modern writing makes possible. In this, the book becomes a role model for how to bring our traditional texts to modern forms for today’s readers. How does the book achieve this ease with all its complexity? It is in the gradual journey towards the complex from the simple. One step at a time approach, verse to verse, concept to concept and towards the web of complex, in cycles through arranged repetition – this is the secret of this good writing. And this composition does not even strike a reader while reading – which is composition achieved along with a good flow.

What else could be expected?

Bharateeya Sanatana Parampara organized knowledge in the form of Sutras. This organization was aligned with the overall purpose of those texts – performative knowledge within a conducing environment. However, our contexts have changed and our performative orientations have also changed. Modernity has shifted to understand first and then begin performance. Bharateeya Parampara has so far anchored itself on a Shraddha where both went hand in hand, but Modernity has disrupted, and hence this kind of a modern text. However, this still reaches only the intellectual reader. We need ways and means to reach other kind of readers too. We need diagrammatic and visual ways of re-presenting our ancient texts. Ontology lends itself to be represented through graphs, structures and relationships. We need to augment texts with minimal illustrations to make the text more accessible.

However, for an advanced reader the book is most perfectly placed. It is an absolute treat to repeatedly read and internalize the complexity. In the next version, the author may want to build some pathways into our Epics and Puranas too from this book. It may help a better appreciation of Ramayana and Mahabharata for a discerning reader. For now, it takes an enormous number of years for a Ramayana and Mahabharata enthusiast to appreciate there is much more than the story and a first level appreciation of Dharma. The Ontology over which Dharma stands often escapes most readers as we do not have enabling texts. Such a contribution could have a far reaching impact. One also wonders if such a bridge can be built to Dharmashastras and Smritis.

We can, of course, have all our wishes but that does not take away the brilliant achievement of this book. From what a book makes possible emerges our ambitious wants. To that extent the book stretches the boundary of possibility and imagination for a seeker within the Tradition. One wonders if there can be a better achievement than this. One only stands in respect expecting more from Nithin Sridhar in the coming days and wishing him success. For that would be one of the Traditions too.