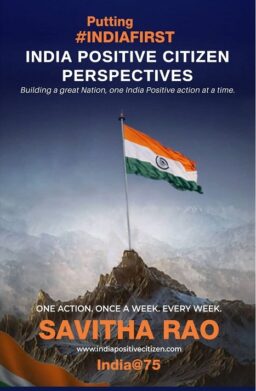 The journey of every human being has some ‘svArasya’ in it. Why only a human being – every animal, even a plant – every life form has a journey. Every story is worth telling. Classical literature of India emphasizes this even in its mighty works.  In our Epics, a Rishi here or a prince there appears in a cameo but the Epic seems incomplete without that character. Every small character is presented with a seriousness of being an integral part of the larger edifice. The west may not have accorded such high importance to the common man in the past. But, in the modern era, the west has shed that aspect of its eliteness. Writers have carved journeys of all people. Biographies, Autobiographies, Hagiographies, short and long Portrayals – we not only have a genre for personality portrayal but we also have sub categories within it. Magazines invariably carry short portrayals. With this we not only read about the highest achievers, but we also read about interesting personalities, sometimes tragic failures and so on. The interest in another human being is universal. There is a space for every moving story, when told with the right distance and silence.

Savitha Rao has come up with one such portrayal book ‘Putting #IndiaFirst – India Positive Citizen Perspectives. It is a collection of portrayals of 33 achievers of contemporary India. As it is about achievers, the interest quotient of each portrayal is a given. The ‘svArasya’ of the book comes from the selection of these personalities. Savitha Rao has consciously chosen people from diverse fields and concerns, which makes the book interesting to begin with. In her introduction she says “Seemingly small seeds of action become large forests of impact”. She calls upon the youth to reflect upon inspiration, values and issues reflected in the book. It is about the journey of positive minded Indians who in the midst of all their challenges kept their head straight, focused on their objectives, paths and destinations and created a positive impact on the society.

The strength of the book is its authentic voice. Every story is told in the voice of the person being portrayed. That first person narration keeps the readers hooked as every story is rich with moments, turning points, experiences, difficulties, triumphs and so on. Thus, the stories tell themselves – they do not require the narration to elevate them to reach the audience. It is remarkable that the author has chosen to give an appropriate form to the voices of the personalities.

The other striking feature of the book is that every story is accompanied with a lot of personal perspectives which could often become heavy on the headers. Savitha Rao has managed to successfully weave a narrative where the journey, experience and perspective composition is easy on the readers. The authenticity of the experience and the first person narrative help in navigating any difficulty.

Each story is sufficiently short or long and there is a fascinating diversity of stories. Each story is easy on the mind yet they do not compromise on the profundity of experience, importance of those personalities and significance of their impact and contribution. Thus, it is in the choice of those personalities that the book scores big. There is an adequacy of everything in the book. You want to know about the journey of a famous nation building personality – you will have it adequately covered in the book. Thus the book does justice to the personalities chosen and the readers – it brings out all the positive elements of the personality and creates a positive impact on the minds of the readers.

In the choice of the personalities, there is another striking feature. All of them seek individual excellence in chosen areas. They all have their personal dreams which they pursue with single minded devotion. They also see beyond themselves and through their achievements they seek to contribute to nation building and make a positive impact on the society. Yet, they are all unassuming. They do not have any arrogant posture of transforming the society. Rather, they are all genuine seekers – they pursue transcendental experiences. Yet, their work is indeed transformational. Most of them are house-holders and perform their duties as men and women of the household. But they do have something beyond to pursue. All of them derive their inspiration from the rich heritage of Bharatavarsha. Their seeking to contribute to the nation comes from the very civilizational flow. They acknowledge the problems and shortcomings of our society. They seek to quietly correct it without much ado about anything. Their ability to see these problems has not resulted in any inferiority complex about the society in them. They go about with their job with the humility of a plumber, yet the impact they make is transformational. Kudos to the author for choosing such personalities and then staying behind to let the stories tell themselves. Thus, without stating as much, the stories portray the Purushartha journey of various personalities – those who quietly carry the Indic culture and heritage on their backs without making noise about it. In summary, it is the Portrayal of high performing and unassuming Indic personalities.

Yet, there is something to ask from the book. It serves a great purpose to introduce these personalities to young men and women – which is much required. But the book will have to stand on its own as a literary piece eventually in the genre of collection of short portrayals. Portrayals will need something more to reach there yet. It either has to achieve it in its narrative or in tapestry. It should encourage readers for multiple readings both in the present and in the long. It must raise questions, create conversations, intrigue minds and so on. One wishes that the author focuses on the same in future editions and portrayals.

Nevertheless, it is important to have Indic personalities, from various fields, presented to the next generation in an authentic, definite and informative manner. The book does its job with impact. One only asks for more in the upcoming books.