A New Idea Of India: Individual Rights In A Civilizational State By Harsh Madhusudan And Rajeev Mantri – Part I 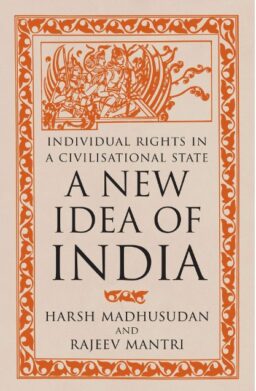 The land of Bharatavarsha is the land of ideas. Over the millennia, we have created a complex web of ideas. This also meant an evolution of their interrelationships and relative positions in the web, beneath a very strong philosophy, some of which have in fact faded away with the passage of time while the others have stayed the course, often enriching the very philosophy itself. The concept of Rashtra is one such idea that has stayed its course without varying even as the geographical boundaries changed. However, with the advent of Nationalism in Europe, our concept of Rashtra was forced to foreground itself in a different Avatar. The Indian National movement rose to this challenge. It drew its inspiration from many concepts of Sanatana Dharma. The Rashtra in general and Bharatavarsha in particular are two such concepts that rallied around the National Movement galvanizing Bharatavarsha towards the form equivalent to the European Nation State. Its differences with the European Nation State, is of course another debate.

Yet, in spite of material evidence in its favour, the post 1947 secular scholars have sought to delineate Modern India from its Bharatavarsha history. They formulated “The Idea of India” as having been shaped by Nehru prominently and represented by the Constitution of India. 1947 is literally the Zero Year for them – a break from the past and this in spite of the Constituent Assembly members clearly seeing themselves as continuing the Bharatavarsha tradition. The Bharateeya Traditionalists have constantly opposed this new formulation seeking supremacy for itself. For the first few decades, this conflict was one sided with Secularists winning it hands-down, going on to occupy and dominate every single Modern Institution. However, the Bharateeya Manas has slowly but surely reclaimed its confidence in the last couple of decades. It has begun to emphasize its position – the Dharma and reclaim its true space. It is in this trajectory that we place this new book – “A New Idea of India” written by Harsh Madhusudhan and Rajeev Mantri.

To give a brief summary of the book – it consists of 5 chapters. The first two chapters discuss interesting civilizational concepts. They are organized in a manner so as to build a platform of ideas for the future. The next three chapters deal with the present and discuss many aspects of our nation and civilization that needs changing, reshaping and restructuring for a brighter future of India, that is Bharat. The first two chapters are intellectual and engage with more important abstract concepts that make a difference to the nation and civilization. The subsequent 3 chapters are loaded more with specific initiatives, programs, actions, implementations, objects and entities even as they present old and new concepts in the same context.

The question is how do you review such a work that proposes to build a Civilizational narrative for the future? This review builds an engagement with Concepts (and the overall vision that emerges) presented in this book. Towards this, the review will focus primarily on the first two chapters of the book – in a series of 5-6 short articles. In each article, we shall engage with 1-2 important concepts presented in the book in as much detail. Finally, we shall present the philosophical complex of the book and alternatives that are possible. It is not a comprehensive review of the book from the content standpoint but will be so from the standpoint of the world view it presents and the civilizational future it envisages.

The first concept we engage with is ‘Scepticism/Sceptical Tradition that the book characterizes our tradition as. In the very first page, the authors characterize the Bharateeya Parampara as being filled with Scepticism. It opens with the reference to the Nasadiya Sukta and says,

“The Vedas, the foundational texts of Dharma, created some three to five millennia ago, are filled with such scepticism that would gladden the hearts of philosophers and physicists even today.”

What is the book trying to establish through this emphasis on sceptical tradition? Here are some important sentences from the book, from the initial pages, that throw insight on the position of the book.

These are massive claims. Literally every civilizationally important aspect of Bharatavarsha is being attributed to this scepticism tracing it back to the Nasadiya Sukta itself. This approach to narrative building has two limitations.

This reduction of Nasadiya Sukta as representing Scepticism and Bharateeya Parampara as being a Sceptical Tradition comes from a literal reading of the Vedas. This kind of reading is a modern penchant. There is no evidence in the Tradition for such an interpretation. Traditional accounts do not contain Nasadiya Sukta as reflecting Scepticism of this kind. You can neither find this in Sayana’s 14th Century Bhaashya nor in Sri. Aurobindo’s spiritual endeavors in the 20th Century. According to the Tradition, Nasadiya Sukta reflects the difficulty of perceiving, realizing the Ultimate Truth at its finesse. It is the difficulty of the Sakshatkara of the Ultimate Truth.

The Vedas provide a brilliant Ontology from which a complex Epistemology emerges – all for the organization of a fulfilling life. If we must establish scepticism as a critical element of the Tradition, it must be found within this Ontology and in consistency with other concepts of this Ontology. Any liberal interpretation out of sync with the universe offered by the Vedas may not hold itself for long and contribute to a reasonable future. This grounding is necessary because the Vedas present an integrated world view of the Spiritual and the Physical. It marks clear boundaries for the Physical crossing which leads to disasters. Modernity definitely crosses these boundaries and scepticism in the Nasadiya Sukta cannot become an instrument to defend our joining the Modern world ignoring those excesses.

In particular, Nasadiya Sukta should not become a reason to include agnostics and atheists (Double-A) of the modern variety within the Sanatana Tradition. It is an Astika Tradition which presents a pantheon of Devatas who represent specific aspects of Dharma and defend them according to the universal Rta (The Cosmic Order of the Universe). It is true that the Tradition does not persecute the agnostics/atheists (such as Charvakas), but that does not mean that the Tradition approved of it through its sckepticism. It sought to constantly engage with them. It perceived atheism/agnostic-ness as harmful that would break-down the Iha-Para integrity. Without that integrity, without the acceptance of Para, Dharma becomes unsustainable and the Iha goes awry. Hence, whatever else we do today, we should not confuse the cosmic difficulty expressed by the Nasadiya Sukta as having any causational/non-causational relationship with the Double-A.

The question is how do we then account for those Civilizational values in the Parampara that the book attributes to scepticism? Is it possible to explain them without the crutch of Scepticism? In this review, we shall briefly discuss that possibility. Towards this objective, we must understand the (philosophical) Cosmology of our Tradition. The civilizational values are a consequence of the same.

The Cosmology and the Civilizational Values

Fundamentally, the Cosmology of the Vedas formulates a different perspective of time. It is from this dimension that we explain those civilizational values. It starts with the most ideal state of the Universe – referred to as the Sthiti. The Universe ought to be in Sthiti all the time. It has the following characteristics:

The critical aspect of this world view/cosmology is that ‘Change’ is an integral part of life. Further, because of Srishti, no two points on the path of Rta are exactly the same. As a consequence, Bharateeya Parampara has sheltered a perspective that-

In the light of this, let us revisit the centrality of Scepticism as presented by the book and see how each of the Civilizational values attributed to the former emerges from the world view presented in this review.

As long as what is being created is ‘productive’ for the universe, it finds an honourable place in the society with interfaces. It is not just tolerated but appropriately accommodated although toleration is an incorrect word to describe the phenomenon because the objective is to build harmony. Toleration underscores an unresolved conflict. In fact, society has an obligation to accommodate every meaningful Srishti and the resulting lifestyle/thought/philosophy/approach – hence, Diversity.

Given so many options, we are likely to err. It is to seek this order that life is organized into communities, traditions, customs, practices so that we are able to control the next state of the universe. More than flexibility, they present a set of action possibilities that guide us to be in order – on the path of Rta. Yet, when it ought to go awry it does.

Thus, it is quite clear that we do not need Scepticism for us to contain and nurture these important civilizational values. Neither does the Tradition take that view.

That said, scepticism is an important tool in the material world. It becomes a great tool to create robust systems. It is not to say that Traditional life never employed scepticism as a tool of life. In fact, we did so in a completely different direction. Every community employed scepticism as an instrument of filtering out what was not needed by the community. That anything that was adopted by the community was the consequence of immense scrutiny to protect order within the Community. Finally, it became an instrument of not straying away from the Rta.

Thus, we begin our engagement with ‘A New Idea of India’. The authors have humbly named the book as ‘A New Idea’. In our collective effort to envisage a future in continuity with our past, many Ideas of India will emerge. It is in an open discourse between them that a harmonious future will be realized.

In the next part of this review, we shall see a comprehensive engagement with all concepts present in the Chapter-1 of the book.