Indian Masters and Globalisation of Yoga: A Contemporary Reading 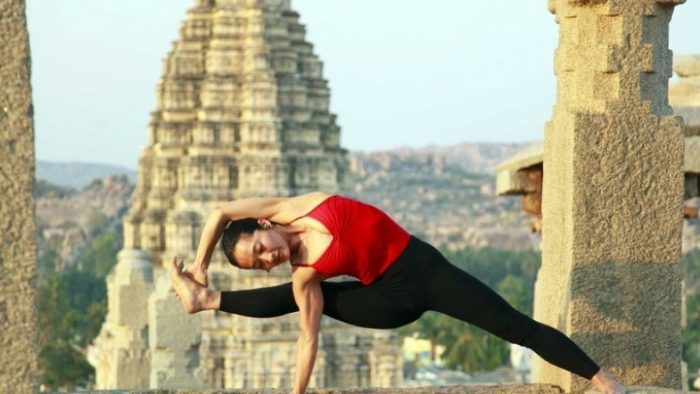 Swami Vivekananda’s Raja yoga could have been a benediction of yoga’s globalization, yoga has undergone a tremendous metamorphosis ever since. After Vivekananda, many Indian masters like Yogananda, Sri Aurobindo among many have been instrumental in putting the wisdom of yoga on the foreign shores. Hatha yogis like Krishnamacharya, Desikachar, Swami Sivananda and BKS Iyengar introduced authentic yoga practices. However, the praxis of modern-day yoga is remarkably divorced from its source yoga philosophy.  International Day of Yoga has truly globalized it in literal sense of the term. Globalization may have enhanced yoga’s ambit but it has raised certain questions like the authenticity of practice and dilution of core philosophy. Though further popularity and penetration of yoga will continue to pose these challenges, role of yoga’s globalization in solidifying India’s ancient wisdom cannot be ignored.  Delineating yoga’s portrayal on the globalized canvass, this article journalistically presents a twofold perspective on yoga, in tune with tradition and today’s time.

The intent is not to culturally defend but to argue that globalization is becoming a two-edged sword for yoga. While facilitating yoga’s popularity and reach, globalization is limiting yoga’s dynamics to physical workouts. Therefore, this paper also explores the possibility of revisiting the yoga philosophy of select masters to help us reconnect to the core of the yogic tradition. After all, embracing yoga as a fashion, fantasy or therapy can offer benefits but understanding its true essence can, perhaps, help us receive the best of what life has to offer us.

Scintillating speaker with profound depths of spiritual understanding, Swami Vivekananda has been a pioneer in facilitating the cultural and spiritual exchange between the East and the West. He could be one of the first Indian masters offering commentary and translation of Patanjali yoga sutras. Vivekananda’s propagation of yoga in the West remains deeply rooted in tradition and yet looks cordially conversant with the modern-day world.

Conveying the immensity of yoga, Vivekananda in his preface of the book Raj yoga, says, “All the orthodox systems of Indian philosophy have one goal in view, the liberation of the soul through perfection. The method is by Yoga. The word Yoga covers an immense ground, but both the Sânkhya and the Vedanta Schools point to Yoga in some form or other.” [i]‘Swami Vivekananda’s contribution to the discourse of yoga are many’[ii], observes scholar Jeffery Long. He further says that ‘Swamiji articulates a view of yoga that is comprehensive: a holistic way of life leading to fulfillment and peace of mind, and the realization of our highest potential’.[iii]

On an account, Vivekananda’s revival of yoga not only drew and a lot of following but it created earnest urge n westerns to learn Patanjali yoga sutras. In that sense, Swami Vivekananda could be called a ‘Messiah of Resurgent India’[iv].

American Indologist David Gorden White, in his well-researched book, ‘The “Yoga Sutra of Patanjali”: A Biography’ calls Vivekananda’s exposition of Patajali’s aphorism as ‘mainstreaming of the yoga sutra’. [v]Gorden further adds, “Swami Vivekananda recovered the yoga sutras from oblivion and made its contents known to the milieus of western spiritualism. Over the past century, Vivekananda’s legacy has prevailed in yoga’s subcultures….If again, to quote Mark Singleton, ‘the vision of yoga sutras as the timeless tradition the Classical Indian Yoga, is but an idees recues o modern era’, there can be no doubt Vivekananda as its transmitter.” [vi]

Sri Pamahansa Yogananda and Sri Aurobindo propounded variants of yoga called Kriya yoga and Integral Yoga respectively and also took to the USA and western countries by storm. However, these versions take a holistic view of yoga and divinity and stem from their own realizations.

The whole principle of Integral Yoga’ in Aurobindo’s  words is, ‘is to give oneself entirely to the Divine alone and to nobody else, and to bring down into ourselves by union with the Divine Mother all the transcendent light, power, wideness, peace, purity, truth-consciousness and Ananda of the Supramental Divine.’[vii]. Aurobindo has played a significant role in bringing people back to Indian yoga tradition.  ‘Sri Aurobindo’s hermeneutics still matters now,’ observes Indic and Western philosophy scholar Ayon Maharaj, ‘From an Aurobindonian standpoint, historico-philological inquiry into the meaning of scripture remains incomplete and sterile unless it is grounded in a fundamental attitude of Shraddha.’ [viii]

Though Kriya yoga has a lineage of spiritual masters like Yukteshwar Giri or Lahari Mahasaya, it was prominently elaborated upon and propagated by Paramhansa Yogananda. Kriya yoga, a breathing practice and a meditation technique, has its history into Gita, Patanjali Yoga sutras and other scriptures. ‘Kriya Yoga is a simple, psychophysiological method by which the human blood is decarbonized and recharged with oxygen. The atoms of this extra oxygen are transmuted into life current to rejuvenate the brain and spinal centers,’[ix]explained a noted scientist Dr. George W. Crile of Cleveland, before a 1940 meeting of the American Association for the Advancement of Science.

On December 11, 2014, United Nations declared June 21, as the International Yoga Day. ‘A total of 177 nations co-sponsored the resolution, which is the highest number of co-sponsors ever for any UNGA Resolution of such nature.’[x] Ever since, each yoga day has witnessed spectacular yoga demonstration setting newer and newer world records every year. With the day drawing people across religions and cultures, yoga, in a sense can be called a great unifying force across the globe. Perhaps, yoga could be the only cultural phenomenon which is now gradually acquiring the secular dimension. Since 2015, the day has been commemorated with relevant themes like, yoga and diabetes, yoga and sustainability, yoga for heart et al.

After the International yoga Day, penetration of yoga has been wider and expansive as this practice has received a leg-up. Yoga is globally valued at $80 billion industry[xi]. According to statistics and studies portal Statista, the US had 37 million people practicing yoga by the end of 2015 as against 17 million in 2008. This number is expected to increase to 55 million by 2020.[xii].  According to a recent survey conducted by the Yoga Alliance and Yoga Journal, between 2012 and 2016 the number of Americans doing yoga rose from 20.4 million to 36 million.[xiii]

Yoga has also been receiving scientific attention with global research focusing on its therapeutic and meditative value. Traditional yoga schools in India like Bihar School of Yoga, Sivananda, Kaivalyadhama and modern universities like Swami Vivekananda Yoga Anusandhan Samstha (SVYASA) and NIMHANS have been extensively been focusing on yoga research. World’s best universities like Harvard and MIT have shown a keen interest on yoga research. Internationalization of yoga is now more restricted to health management.

While billions are stretching for their practice of yoga, popularity and internationalisation of yoga has posed many questions, mainly, modern yoga’s divorce from the classical tradition, dilution of core yoga philosophy and problems of cultural appropriation like secularism, religiosity and promotion of Hinduism through yoga. With the objection of Muslim countries, the Indian government had to drop sun salutations and practice of Om from its maiden International Yoga Day code. The Indian government has also been accused as yoga being politicized to slyly promote the ‘Hindu agenda’ and marginalize ‘minorities’. “It is a campaign to enforce Hindu rituals on all non-Hindus,” said Abdul Rahim Qureshi, spokesperson of the All India Muslim Personal Law Board. [xiv]Conservative christens have also raised objection on yoga practice.

While liberal and open-minded keep on stressing scientificity of yoga, Hindu scholarship raises another question, is yoga secular or steeped deep into Hindu tradition?  Moreover, merely restricting yoga as a physical exercise has given rise to many self-proclaimed adaptations of yoga from power yoga to beer and nude yoga. Such adaptations not only mark the breach of tradition indeed pose questions on the intent and authenticity of practice.  Though yoga aphorism in themselves have undergone several modifications, growing ‘distortion’ has led to certain arguments.

Therefore, there are some arguments on yoga’s globalization. Jeffery D Long, in his article, the globalization of yoga: An Argumentative Approach, argues, “What I am proposing, in other words, is an argumentative approach to the global yoga phenomenon… The truth is, though, that the clash in the world of yoga is not merely a clash of cultures. It is a clash of worldviews. And clashes of worldviews are best resolved in the arena of philosophical debate.” [xv]Yoga being one of the six orthodox schools of Hindu philosophy, reconnecting it to the source can probably lead to authentic understanding than trying to fit yoga into the secular mould.

Is yoga Indian?  Is yoga a Hindu practice? Is yoga a therapy? Is yoga a stress buster? Can yoga bring about peace of mind?

Yes is the common answer to all the above questions.  While yoga may offer flexibility to be adapted into different world cultures, in today’s time and age, what yoga requires is cultural appreciation than appropriation.  Moreover, asana, one of the limbs of the ashtanga yoga has seen all the variations and appropriations suiting to different tastes. ‘Unfortunately, cultural appropriation has done much to obscure yoga’s true origins’, observes US fitness blogger Rina Deshpande. ‘Even in communities that value the spiritual aspect of yoga, appropriation is sometimes wrapped in appreciation and unintentional offense,’ [xvi] she adds further.  Belonging to other religions and nationalities will not deny you the yoga advantage but its cultural appreciation will lead to understanding better depth, vastness and expanse of the term yoga.

The internationalization of yoga has widened the scope for yoga practice. India, the birthplace of yoga, has cut a fine figure in the world. The Union Ministry of Tourism and Culture has mooted a plan to promote yoga tourism in India as the country continues to draw a high number of foreigners keen on learning yoga. Indian wellness industry (Yoga and Ayurveda) is expected to hit a whopping 1.4 trillion rupees by 2020 according to various reports and surveys.[xvii] Rishikesh and Mysore are considered India’s yoga capitals.

In spite of India’s rich cultural and yogic heritage, the country has not been able to make the most of its legacy in the form of soft power and cultural diplomacy. Renowned Hindu scholar David Frawley notes that yet during this extraordinary spread of India’s cultural traditions through the twentieth century, the government of independent India did little to encourage or to benefit from it. Perhaps no other country in recent times has so ignored the potential value of its soft power and so much neglected the role of cultural diplomacy.’[xviii] As Frawley points out further, ‘Cultural power must form an integral part of any realistic foreign policy’. [xix] Therefore, it is pertinent that India uses yoga as its soft power and civilizational strength in the international arena diplomatically. After all, cultural diplomacy comes with the responsibility of retaining the traditional treasure trove of yoga offering little scope for its distortion. Shouldering the responsibility is indicative of facilitating infrastructural support, promote Indic and yogic research and political will.

As noted above, with the globalisation of yoga is widening yoga’s reach, it poses the challenge of modern-day practice characterized by distortions and a remarkable break from core tradition.  Though millions in the world could be breaking the sweat with yoga, ignoring other limbs of yoga could lead to philosophical paralysis. As the very word yoga means integration, the fragmented approach makes subsequent problems more serious than challenges.  Instead of limiting yoga to its postural aspects understating its wholeness may help us reinvent its soul. As renowned yoga researcher Mark Singleton observes, “Understanding yoga’s history and tangled, ancient roots bring us that much closer to true, clear seeing. It may also help to move us to a more mature phase of yoga practice for the 21st century.”[xx]