A Few Compositions Of KuttikunjuThangachi – An Aesthetic Approach 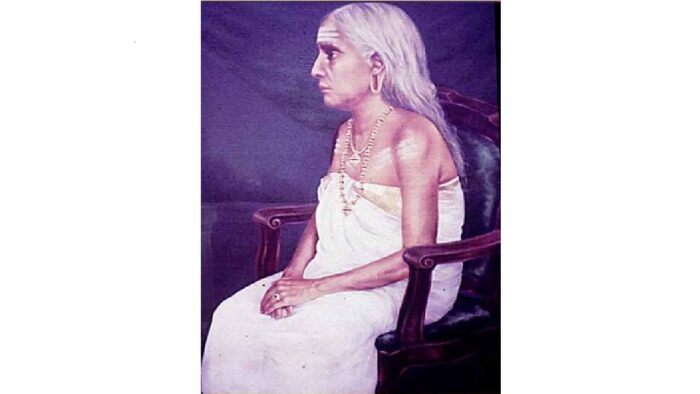 A brief introduction to Aesthetics as a discipline may be apposite here. Any art or science has an element of aesthetics embedded in it. It revolves around the beauty and appeal that any subject of study possesses. Needless to say, more than any empirical science or other disciplines, all disciplines in art are raised to a much higher plane owing to the aesthetic values inherent in them.

Aesthetics is a philosophy of beauty. It is a branch of the discipline called axiology, the other limb being ethics or ‘dharma shAstra’ as they are popularly known. While ‘ethics’ was given importance in our society, since ‘ethics’ is the very foundation of a stable, balanced society, ‘aesthetics’ as a discipline does not appear to have enjoyed such importance and it was left to individuals to practice, sustain and promote ‘aesthetics’ as we understand today.

Beauty is an important component in any art form, be it music, dance, painting, sculpture, literature etc. JagannathaPanditha’s definition of beauty in Rasa Gangadhara is:

क्षणेक्षणेयन्नवतामुपैतितदेवरूपंरमणीयताया: | i.e. “Every time you look at it, it reveals a freshness; we go back repeatedly to the same work”. He adds the phrase पुन: पुनरनुसंधानात्मा meaning “repeated reflection”.

Therefore the attributes of beauty contribute to aesthetics. This paper is an attempt to analyse the components of aesthetics as seen in some of the compositions of the famous, but not so well-known, Kerala composer Smt. KuttikunjuThangachi.

A Brief Bio of the composer

KuttikunjuThangachi (1820-1908), daughter of IrayimmanThampi, the chief musician in the court of Maharaja Swati Tirunal, is a composer of merit. Though only a few of her compositions have survived the onslaught of time, they stand testimony to her creative genius and the aesthetic values they possess.

The only daughter of IrayimmanThampi, her name was Lakshmi Pillai. She learnt Tiruvatirapaattu and music from her father. She learnt Kavyanatakam, alamkAra, vyAkaraNa and tarkkam, and composed in both Malayalam and Sanskrit. She composed a thullal (a ritual dance form performed by one individual), and was the author of attakathas (kathakali) such as ‘ParvatiSwayamvaram’ and ‘SrimatiSwayamvaram,’  as also literary works such as Tiruvananthapuramsthalapuranam, Nalacharitra and Gajendramoksham[1]. An adept in dancing, she enjoyed wide reputation as a teacher of MohiniAttam[2].

“Even though her ATTakkatha and folk music compositions are considered great works and treated with great veneration, she was equally popular as a composer of classical forms of music[3]”. The songs of KuttikunjuThangachi are in Sanskrit, Malayalam and also manipravalam (a mix of different languages). Some of her compositions include “karthyayani mam palayasatatam” in Kambodhi raga, “pahimohanakrithe” in Khamas raga “sripavanapuresa” in Surutti raga and “anandarupa hare” in Pantuvarali raga. In addition, she has also composed several forms of classical and folk melodies that are specific to the cultural heritage of Kerala, such as “kilippattu”, “thullal”, “tiruvathiraipattu” and “vatilturapattu”.

Of the compositions mentioned above, only 14 consisting of 6 kritis, 4 abhinayapadams, 3 vatilturapattu (or sringArapadams) and 1 tillana are available to us. The lyrics of these compositions may be seen in the article mentioned in the footnote.

In music compositions, the aesthetic experience or rasa anubhava arises from the lyrics, the melodies employed, the rhythmic beauties and other components such as aucitya, balance, symmetry, proportion etc.

In this paper, a few of her compositions have been taken up for analysing the aesthetic component in the sahitya or the lyrics employed. It may be mentioned here that the Sanskrit work “Chandraloka” is a text on alamkArashastra where the definitions of a variety of alamkAras or ornamentations in literature, are given. It is employment of such alamkAras that gives pleasure to the reader. The opening verse of this work defines the role of alamkAra:

Of these, some are sabdAlamkAras (dexterous use of words and syllables) and some others are arthAlamkAras (employing words conveying related meanings). It is interesting to note that the number of alamkAras, given as four by Bharata in his NatyaSastra, had since expanded to a much larger number. Bharata says:

The four alamkAras mentioned by Bharata are upama, rupakam, deepakam (all three are arthalamkAra) and yamakam (sabdAlamkAra). This points to the fact that akavya gave importance not only to the play of words, but also the hidden and profound meanings contained in them.

1.  In the kriti फुल्लांभोरुहतुल्य in Kalyani raga, set to jhampatala, the shabdAlamkAra of the anuprAsa variety has been beautifully portrayed. The words are: फुल्लांभोरुहतुल्यविलोचने, कल्याणि, वल्लभे, विल्लाळिप्रवरनाम्, मल्लीसायकन्, पडविल्लुं, कुलच्चेडुत्तु, नल्ल, नलमोडे, अल्लल् and चोल्लावतो. It can be seen that there is a profusion of the letter ‘la’, which makes for an aesthetic appeal. The sound is soft and the feelings expressed are tender. The employment of this letter shows the mastery of the composer over language: this type of usage is known as “padalalityam” and is reminiscent of Dandin, the great prose writer in Sanskrit, who is famous for his Dasa Kumara Carita. One can also see this in Vedanta Desika’s RaghuveeraGadyam. It is interesting to note that the composer has employed the conventional dvitIyAksharaprAsa, which not only embellishes the sahitya but also a significant feature of most musical compositions.

The words विल्लाळिप्रवर  and मल्लीसायक point to a puranic allusion to Manmatha, who is legendarily known as the god of love in Hindu mythology and is represented as being armed with a sugarcane bow and equipped with five arrows which comprise five flowers and hence known as ‘panchabANa’. The verse runs as:

The five flowers in the arrows are ashoka flower, white lotus, flower of the mango tree, jasmine and blue lotus.

3. Apart from the lyrical beauty, the concept of saranagati, the last step in ‘navavidha bhakti’ spoken by Prahlada – is expounded in the composition ‘samajahara hare’ in Kalyaniraga and set to Aditala. The lyric readsआशयकारुण्यंपूण्ड, बालआतङ्गात्उदितमां, क्लेशमाशु, आदिकेशवविभो, केशीमथन, कृपालेशंअल्लातेओरवलम्बं, ईशमट्टिल्लएनिक्क, रमेश, भुवनेश.  In addition to the meaningful association of words, we also find a charming instance of alliteration, in the use of the lilting letter ‘sha’. The reference to the “kArunya” of the Lord and the burning desire to get out of suffering –  क्लेशमाशु (quick relief from physical and mental suffering) evokes bhakti rasa in the listener.

4. The lovely kriti “suryakotisamaprabha” in nata ragaand set to chaputala, on deviMookambika, revels in the use of the hard consonant and the samyuktAkshara “N” and “ksha” for rhyming effect. The lyric referred to is given below:

So is the use of the word “ambike” in the following charana.

6. Alliteration and dvitiyaksharaprasa abound in the padam “bAlikepOkArutennum”. The lyrics are:

Also see the next charana:

It may be noted here that this padam is in the form of a nindastuti where the lady warns the young girl not to seek the company of lord Subrahmanya since he is wont to steal one’s mind.

7. Regarding arthalamkara, we may see the pallavi and the concluding carana of the tillana piece in durbar raga, set to aditala.

(the king is shining brilliantly).

How brilliant? The answer is:

This is a simile, i.e. arthalamkara. There is also an implied meaning in this simile, in addition to a comparison. The kind and humane disposition of the king and his splendid personality are comparable to two predominant qualities of the moon. Firstly, its rays are cool and secondly, it has a pleasing appearance (आह्लादत्वं).

8. In the padam in Madhyamavati raga “yAhiyAhimohanAkrute” set to Aditala, one finds instances of rupakaalamkara (metaphor), one of the arthAlamkaras. The women longing for darshan of Lord Krishna are described as लोहितअम्बुजाक्षिमार्, (meaning ladies whose eyes resemble the red lotus). In one of the charanas, the reference to पङ्कजमुखि (e. lotus-faced) while describing the women is again another instance of rupakaalamkAra. In addition to the literal meanings assigned to these words, there is a deeper import. Lotuses blossom when the Sun rises and close with sunset. Likewise when the devotees see Lord Krishna, their faces blossom in happiness. Moreover, this comparison is an instance of the alamkAraatishayokti also.

9. A look at a composition in the genre of padams, before we close. The padam in Huseni raga and Aditala, is replete with sringara rasa of the vipralamba variety. Rasa is defined as ‘रस्यतेअनेनइतिरस:” i.e. “predominant sentiment” (अङ्गिरस), though there could be subsidiary rasa (अङ्गरस). The oft-quoted verse is:

The meaning is: rasa is said to be that delectable state which is brought about when the sthāyībhava (permanent mood) is acted upon and heightened by a combination of vibhāva, anubhāva, sāttvikabhāva and sancārībhāva.

It is also significant to note that vipralambasrngara (love in separation) is distinguished from ‘shoka rasa’ (sorrow) though both portray mental suffering. The distinction is explained as the difference in the permanent mood. The verse is:

Freely translated: “shoka” or sorrow is different from vipralambasrngAra (love in separation). In vipralamba, the love delineated is permanent and continuous with the prospect of reunion, unlike shoka rasa, where one has to face the sorrow of losing a person for good. The text starts as:

i.e. the heroine sends a lovelorn message through her friend, beseeching her lover to come to her.

The relevant portion reads as

चञ्चलाक्षि! (one with tremulous eyes),वैकिटाते (without delay), चेन्न (having gone to him), कामसंकटं (my lovelorn state), सकलमेण्टे (all my mental suffering), वरन्नु (to that noble one), करुणवळरुमारु ( in such a way that will evoke sympathy for me), उणर्त्ति (impressing), नी (you), पञ्चबाणकेळियिन्नु ( the sport of the one with five-flowered arrows, i.e. Manmatha),वञ्चिबालवर्म्मकुलशेखरंअरिकिल्आनय (fetch Kulashekhara to my presence), and विरविल्आनय (bring him swiftly). These reveal the pining pangs of separation, which is the essence of vipralambasrngAra.

In poetry also we can see both varieties of sringAra, i.e. sambhogasringAra and vipralambasringAra: in circumstances where there is union, it is the former and when there is separation, it is the latter. In dance (drshyakAvya), these emotions are more powerfully portrayed as there is a visual presentation of emotions, to the audience. This makes for a deep, lasting and heightened aesthetic experience or rAsikya. Thus we find that shabda and artha in the lyrics employed contribute to the aesthetic enjoyment of the reader.

In this connection, one may point out the fact that this aesthetic experience is the result of sahrdayatvam. A person endowed with the requisite understanding and desire alone is able to appreciate the beauty of a piece of art, be it music, dance, sculpture or painting. And the joy arising from this beauty is not a short-lived one, nor one that titillates the senses. The great critic-scholar-commentator Abhinavagupta has equated it to being next only to brahmAnanda. In his Locana, the commentary on the Dhvanyaloka of Anandavardhana, he writes: परब्रह्मास्वादसब्रह्मचारित्वंचास्तौअस्यरसास्वादस्य (qtd in Gnoli 1985: 48). He calls it brahmAnandasahOdara.

It means: this rasaanubhava is similar to the experience arising out of the experience of direct knowledge of Brahman itself. The same idea is echoed by Viśwanātha in SāhityaDarpana (1450 AD) when he says: “akhaNDasvaprakAshAnandacinmayahvEdAntasparshashUnyahbrahmAsvAdasahOdarahlOkOttaracamatkAraprANah (II, 2, 3) (qtd. inGautam, M.R.1989: 157).

This is the high pedestal on which our aestheticians have placed aesthetic joy or rasAnubhava.

A brief survey of the aesthetic beauty of the compositions of KuttikunjuThangachi, the composer from Kerala, is made in this paper and is admittedly not doing full justice to this great composer.

[1] I am grateful to Sri P.P. Narayanaswamy for providing me a lot of material on KuttikunjuThangachi. The reader may refer to his scholarly articles on this composer, for more information.