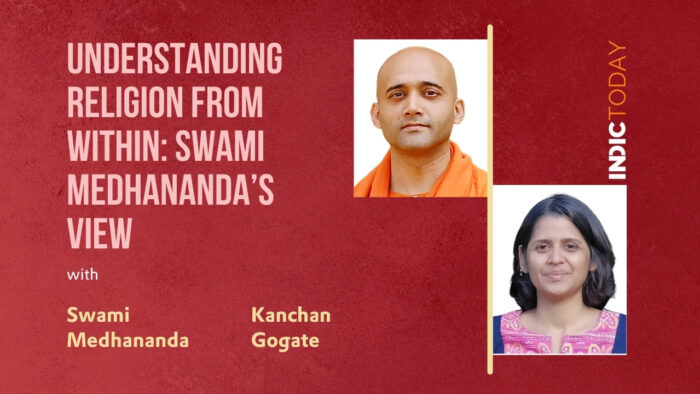 Swami Medhananda, also known as Ayon Maharaj, is a scholarly monk of the Ramakrishna Math and Mission and currently Senior Research Fellow in Philosophy at the Ramakrishna Institute of Moral and Spiritual Education (RIMSE) in Mysore, India. He received his Ph.D. in German aesthetics from the University of California, Berkeley. He is the recipient of several awards and fellowships across the world. The Maharaj is an expert in cross-cultural philosophy, especially on Ramakrishna-Vivekananda thought, Vedanta philosophy, scriptural hermeneutics, and the philosophy of Sri Aurobindo.

His first book, The Dialectics of Aesthetic Agency Revaluating German Aesthetics from Kant to Adorno, was published by Bloomsbury in 2013. His second book, Infinite Paths to Infinite Reality: Sri Ramakrishna and Cross-Cultural Philosophy of Religion, was published by Oxford University Press in 2018, and has been well-received in academia and also in Ramakrishna-Vivekananda circles. He is also the editor of the recently published Bloomsbury Research Handbook of Vedānta to which international scholars on the subject have contributed. His new book, Swami Vivekananda’s Vedāntic Cosmopolitanism, will be published by Oxford University Press in January 2022. 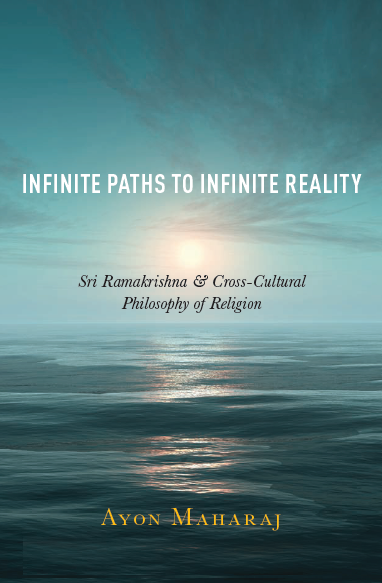 Q. Please tell us what triggered your interest in Ramakrishna-Vivekananda scholarship specifically? Which are the areas of study that are hitherto unexplored in this regard?

Sw Medhananda: Ever since I became inspired by the life and teachings of Sri Ramakrishna and Swami Vivekananda, I have been interested in understanding their philosophical views more deeply and rigorously. While there is a good deal of scholarship on both spiritual figures, I have found that much of it has tended to be historical, sociological, or psych biographical rather than philosophical in approach. In the case of Vivekananda, the vast majority of scholarly discussions of his philosophical ideas have tended to cast him as a modern-day exponent of Śaṅkara’s Advaita Vedānta. I think scholars have not paid sufficient attention to what is most original and radical in Vivekananda’s philosophy, and they have underestimated the various ways that his guru Sri Ramakrishna shaped his philosophical and spiritual worldview. In my book, Infinite Paths to Infinite Reality: Sri Ramakrishna and Cross-Cultural Philosophy of Religion (2018), I argue that Sri Ramakrishna’s philosophy of Vijñāna Vedānta is much broader than traditional Vedāntic schools like Śaṅkara’s Advaita Vedānta and Rāmānuja’s Viśiṣṭādvaita Vedānta. In my forthcoming book, Swami Vivekananda’s Vedāntic Cosmopolitanism, I likewise argue that Vivekananda’s life-affirming and ethically-oriented philosophy of “Integral Advaita” bears much closer affinities with Sri Ramakrishna’s Vijñāna Vedānta than with Śaṅkara’s Advaita Vedānta. In both books, I have also tried to bring Ramakrishna and Vivekananda into conversation with contemporary philosophers, highlighting their continued relevance to ongoing philosophical debates about topics like the hard problem of consciousness, the epistemology of mystical experience, and the nature of God. It seems to me that most scholars have tended to view their philosophies as being of primarily historical interest. I make the case that contemporary philosophers stand to learn a great deal from the philosophical ideas and arguments of Sri Ramakrishna and Vivekananda.

Q. What does your upcoming book have to offer to scholars?

Sw Medhananda: My forthcoming book, Swami Vivekananda’s Vedāntic Cosmopolitanism, is an academic philosophical study, so it is addressed primarily to scholars and students. The book provides a new interpretation of Vivekananda’s philosophy, highlighting its originality, contemporary relevance, and cross-cultural significance. Vivekananda, I argue, is best understood as a cosmopolitan Vedāntin who developed novel philosophical positions through creative dialectical engagement with both Indian and Western thinkers. I argue against two dominant interpretations of Vivekananda’s philosophy—namely, that it is simply a modern version of Śaṅkara’s Advaita Vedānta or a “Neo-Vedāntic” philosophy that derives more from Western ideas than Indian sources. I hope the book will be of interest to scholars and students in a number of fields—including philosophy, religious studies, and theology—as it addresses important philosophical issues like the nature of God, the epistemology of mystical experience, the relationship between faith and reason, and the hard problem of consciousness. While most scholars have assumed that Vivekananda’s philosophical views are primarily of historical interest, I argue that his philosophical positions make valuable contributions to ongoing debates in the contemporary philosophy of religion, philosophy of mind, and philosophy of science.

Q. How might spiritual seekers benefit from reading your forthcoming book?

Sw Medhananda: I think several of the book’s chapters will be of interest to those engaged in the exercise of “faith seeking understanding.” Is God personal or impersonal, or both? Is the world real or unreal? What are the most effective spiritual practices for attaining God-realization? How can I strengthen my faith in God and attain purity of mind? Are all the major world religions equally effective in leading to salvation? Is it possible to practice multiple religions at the same time? My book explores Vivekananda’s answers to all of these questions, which are profoundly relevant to spiritual practice.

The book has an additional significance for devotees of Sri Ramakrishna and Vivekananda in particular. A number of very learned and eloquent monks of the Ramakrishna Order have tended to explain the teachings of Sri Ramakrishna and Vivekananda through the lens of Śaṅkara’s Advaita Vedānta, according to which the sole reality is the impersonal nondual Brahman and everything else—including the personal God, individual souls, and the entire universe—is empirically real but ultimately non-existent. If a devotee of Sri Ramakrishna accepts Śaṅkara’s framework, then she will have to believe that the very Ramakrishna she worships in her heart is ultimately non-existent and that she is practicing bhakti because her mind is not sufficiently pure and concentrated to practice the higher discipline of Jñāna Yoga, which alone leads to the highest goal of Advaitic realization. My book challenges this Śaṅkarite approach to Sri Ramakrishna and Vivekananda, arguing that they teach a more expansive and nonsectarian spiritual philosophy than Śaṅkara’s Advaita Vedānta—one that grants full reality to both the personal God and the impersonal nondual Brahman and that holds that all four Yogas (Karma Yoga, Bhakti Yoga, Jñāna Yoga, and Rāja Yoga) are direct and independent paths to liberation. For devotees of Sri Ramakrishna, then, the book can enrich and broaden their spiritual practice by giving them a deeper appreciation of their iṣṭa-devatā (Chosen Deity).

Q. We can see a lot of foreign interest in Indian philosophy. Many scholarly publications on this subject see contributions more from international scholars than from their Indian counterparts. Your observations, please.

Sw Medhananda: I think it’s wonderful that so many talented young scholars throughout the world are starting to take interest in Indian philosophy and to produce high-quality, in-depth research. There are also, of course, some excellent Indian scholars doing cutting-edge work on Indian philosophy, though it is probably true that the majority of recent articles and books on Indian philosophy published in the best international peer-reviewed venues are written by scholars outside of India. I think one of the main reasons for this is that many Indian scholars tend to publish in Indian journals and with Indian book presses. My own impression is that most Indian philosophy journals—with some exceptions—are not as rigorous in their peer review procedures as the top international journals are. It is possible that one reason many Indian scholars do not submit more frequently to international journals is a fear of rejection. However, I have always encouraged my colleagues here in India to submit their work to international peer-reviewed journals as much as possible, as it’s a great way to get expert feedback on their work and to reach out to a global audience.

Q. Since you are both a monk and a scholar, how do you see the relationship between your academic work and your spiritual life?

Sw Medhananda: I feel blessed to be able to do academic work on Vedānta and the philosophies of Sri Ramakrishna, Swami Vivekananda, and Sri Aurobindo, as it’s an opportunity for me to understand my own spiritual tradition more deeply. I also see my academic work as a form of spiritual practice. I try to do all my academic research and teaching as karma-yoga in the Gītā’s sense by offering everything I do to the Divine in a spirit of worship. Recently, scholars in religious studies and theology have begun to recognize the value of “scholar-practitioners” who not only approach a given religious tradition as an object of academic study but also practice that religion themselves. The advantage of being a scholar-practitioner is that one is in a better position to understand religion from within while at the same time striving to maintain academic rigor and a spirit of critical inquiry.