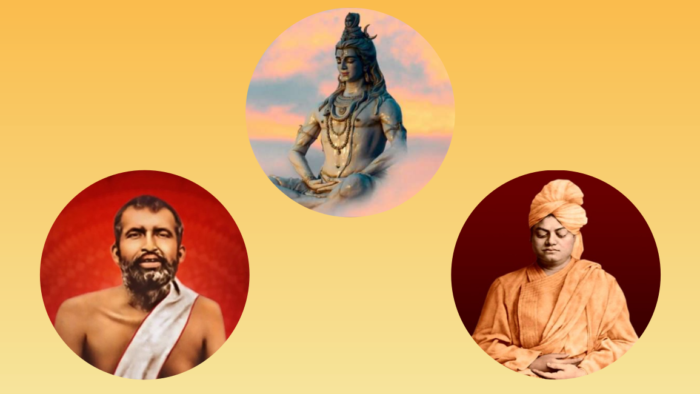 Whenever Sri Ramakrishna uttered the name Siva, he lifted it above the known connotation and denotations of the word and implied it to be the cosmic consciousness, the God manifest and unmanifest whereas Swami Vivekananda made Siva GyaneJivaSeva a mission statement, which is the quintessence of his Practical Vedanta.

Known for myriad spiritual moods, umpteen Sadhanas and divine visions, Sri Ramakrishna was not only a mystic but indeed a God incarnate. Worshipping the God with and without form, Sri Ramakrishna was an embodiment of the essence of Ishwara Tattva, the divinity principle in Indian philosophy. With Kali being a focal point of his Sadhana, Shiva remains an inseparable part of his life.

Shiva is a deity that is invoked in yoga, tantra and many Sadhanas. Shiva is a magnificent, powerful and all-pervading; a rather complex figure of Indian Puranas and Kathas. From ritualistic sacraments to philosophical analyses, Shiva finds a wider and an inevitable mention in our Parampara. Ishvar Gita encompasses the teachings of Shiva who himself has been called the Ishvara in the scripture.

As Sri Ramakrishna spent most of his life in Dakshineshwar temple, near Kolkata, Shiva remains near and dear to Ramakrishna’s heart. His favourite disciple, Swami Vivekananda had deep respect for Lord Shiva and Shiva temples topped his pilgrim list. He had a divine vision of Shiva at Amarnath. However, there is something more to Sri Ramakrishna-Vivekananda-Shiva connection. To them, Shiva is just not a particular deity with attributes. The ability to perceive the formlessness makes Ramakrishna-Vivekananda’s approach to Shiva unique. Seeing Shiva through the eyes of Ramakrishna-Vivekananda can, perhaps, help us understand some latent, hitherto unmanifest facets of the deity.

Sri Ramakrishna’s Siva: The God With and Without form:

Sri Ramakrishna’s connection with Lord Shiva dates back to his childhood days where he had a mystical vision of Shiva. Gadadhar, as he was called in his childhood, was being prepared for the role of Siva on a Sivaratri night for dramatic performance. However, on stage, Gadadhara lost into meditation at the very sight of Siva. ‘The effect of this scene on the audience was tremendous. The people felt as though blessed by a vision of Śiva Himself. The performance had to be stopped, and the boy’s state of trance lasted until the following morning.

Sri Ramakrishna’s teachings are best known through a diary of his disciple, Mahendranath Gupta called Kathamitra ‘The Gospel of Sri Ramakrishna’ and a biography called Lilaprasanga/‘Sri Ramakrishna: The Great Master’ by Swami Saradananda. Dakshineshwar temple, the divine abode of Shiva, Kali and Radhakanta, had been Ramakrishna’s habitat where he performed his Sadhanas. The Gospel refers to the temple Garden of Dakshineshwar nestled along the banks of Ganges.

The visitor arriving by boat ascends the steps of an imposing bathing-Ghāt, which leads to the Chāndni, a roofed terrace, on either side of which stand in a row six temples of Śiva. East of the terrace and the Śiva temples is a large court, paved, rectangular in shape, and running north and south…

In the twelve Śiva temples are installed the emblems of the Great God of renunciation in His various aspects, worshipped daily with proper rites. Śiva requires few articles of worship. White flowers and bel-leaves and a little Ganges water offered with devotion are enough to satisfy the benign Deity and win from Him the boon of liberation…[iv]

Sri Ramakrishna’s Shiva is as much a Shiva as we know it and also someone who is no different from Rama or Krishna. Those who are a little analytically oriented, generally known as Jnanis are considered to be more inclined towards Shiva whereas those who have a devotional frame of mind are inclined towards Vishnu. In Ramakrishna, such a hard distinction is rather impossible. Sri Ramakrishna refers to Lord Shiva as cosmic consciousness, Brahman, Sachchidananda. Therefore, in Ramakrishna, we get advaitic, dvaitic, tantric and Sankhyain’s view of Shiva.

Sri Ramakrishna subtly distinguished between the Jiva and Shiva, ‘a man freed from bondage is Śiva; entangled in bondage, he Jiva. Seemingly simple, Sri Ramakrishna’s style of explaining the subtleties of the form and formless have been intricate. Here, he sees Shiva as the convergence of the form and the formless.

Śiva has two states of mind. First, the state of samādhi, when He is transfixed in the Great Yoga. He is then Ātmārāma, satisfied in the Self. Second, the state when He descends from samādhi and keeps a trace of ego. Then He dances about, chanting, ‘Rāma, Rāma!'”

Sri Ramakrishna also explained that Siva and Shakti are rather inseparable; one cannot exist without the other.

Brahmhan and Sakti are identical That is good. ‘I am Śiva’-that is a good attitude. But I must tell you something else. The process of creation, preservation, and destruction that is going on day and night is due to Śakti, the Power of God. This Primal Power and Brahman are one and the same. Śakti cannot exist without Brahman, just as waves cannot exist without water. There cannot be any instrumental music without an instrument.

Ramakrishna’s explanations of Siva do not always come from scriptures but rather his own divine visions stand testimony to it.

Weeping, I prayed to the Mother: ‘O Mother, reveal to me what is contained in the Vedas and the Vedānta. Reveal to me what is in the Purana and the Tantra.’ One by one She has revealed all these to me. “Yes, She has taught me everything. Oh, how many things she has shown me! One day She showed me Śiva and Śakti everywhere. Everywhere I saw the communion of Śiva and Śakti. Śiva and Śakti existing in all living things-men, animals, trees, plants. I saw them in the communion of all male and female elements.

Sri Ramakrishna also referred to Shiva to denote the oneness of existence.

Sri Ramakrishna’s Shiva indicates one and the many, where it is the one that becomes many.

Like Sri Ramakrishna, Swami Vivekananda’s connection to Lord Shiva not only goes back to his childhood days with biographical accounts narrating many incidents in this regard, but also as he grew up, this connection evolved to become much deeper. As a child, he played the game of meditating on Shiva, and when he was evolving as a sannyasi, he had mystical visions at Amarnath and Kshir Bhavani temple. Sister Nivedita, in her book, The Master as I Saw Him, offers a nice description of Amarnath.

Everything in our life up to the time of the pilgrimage to Amarnath had been associated with the thought of Siva. Each step had seemed to draw us closer to the great snow-mountains that were at once His image and His home. The young moon resting at nightfall above the glacier-cleft and the tossing pines had suggested irresistibly the brow of the Great God. Above all, that world of meditation on whose outskirts we dwelt, had Him as its heart and center, rapt and silent, “above all qualities and beyond the reach of thought.”

Undoubtedly this Hindu idea of Siva is the highest conception of God as approached by the spiritual intuition of man. He is the Divine accessible within and purified of all externals.

However, with regards to Shiva connection, Swamiji’s mission statement Shiva GyaneJivaSeva must be taken into account. Swamiji’s Complete Works, his letters, speeches and other literary works offer a detailed description of the mission statement. In a lecture series from Colombo to Almora, Swamiji, at Rameshwara temple gave a phenomenal address on Real Worship. As Swamiji’s persuasive words resonate,

Let me tell you again that you must be pure and help anyone who comes to you, as much as lies in your power. And this is good Karma. By the power of this, the heart becomes pure (Chitta-shuddhi), and then Shiva who is residing in everyone will become manifest. He is always in the heart of everyone…. This unselfishness is the test of religion. He who has more of this unselfishness is more spiritual and nearer to Shiva. Whether he is learned or ignorant, he is nearer to Shiva than anybody else, whether he knows it or not. And if a man is selfish, even though he has visited all the temples, seen all the places of pilgrimage, and painted himself like a leopard, he is still further off from Shiva.

On Swamiji’s mission statement evolving to Practical Vedanta, Swami Medhananda, Ramakrishna Vivekananda scholar, observes, ‘In several (written in) 1894 letters, Vivekananda emphasizes the importance of śivājñānejīversevā. In one such letter, for instance, he exhorts his brother disciples of Sri Ramakrishna: “If you want any good to come, just throw your ceremonials overboard and worship the Living God, the Man-God—every being that wears a human form—God in His universal as well as individual aspect. The universal aspect of God means this world, and worshipping it means serving it…” (CW 6: 264)’

Salutation to Shiva! whose glory
Is immeasurable, who resembles sky
In clearness, to whom are attributed
The phenomena of all creation,
The preservation and dissolution
Of the universe! May the devotion

The biography of Swami Vivekananda mentions an incident. After his experience of the macrocosm within the microcosm, while absorbed in meditation under the peepul tree at Kakrighat, in 1890, Swami Vivekananda jotted down in Bengali, fragments of his realization in his notebook.

In the beginning, was the Word etc. The microcosm and the macrocosm are built on the same plan. Just as the individual soul is encased in the living body, so is the universal Soul in the Living Prakriti [Nature] — the objective universe. Shivâ [i.e. Kâli] is embracing Shiva: this is not a fancy. This covering of the one [Soul] by the other [Nature] is analogous to the relation between an idea and the word expressing it: they are one and the same; and it is only by a mental abstraction that one can distinguish them. Thought is impossible without words. Therefore, in the beginning was the Word etc.This dual aspect of the Universal Soul is eternal. So what we perceive or feel is this combination of the Eternally Formed and the Eternally Formless.

Thus in conclusion we can say that Ramakrishna-Vivekananda explained the many and the one in different words, contexts and analogies. Siva remained an indispensable analogy of these explications as Shiva himself is analogous to many and one.