Ulupi, a widow who married Arjuna: An instance of widow marriage in the Mahabharata Times 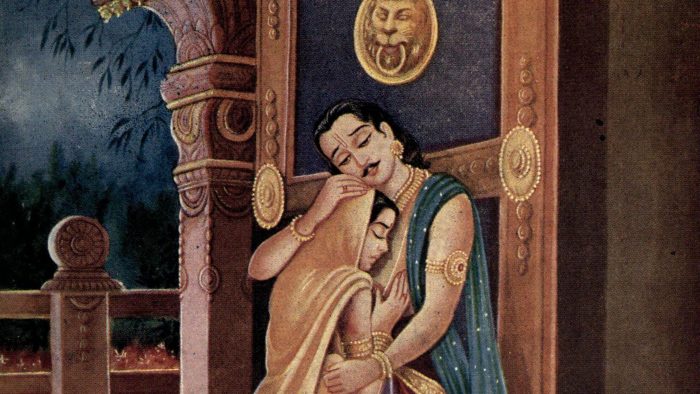 Marrying a widow does not seem to be such an issue during the Mahabharata times, as it became much later. None other than the heroic third Pandav married a widow, Ulupi without any hesitation. Before him, a king by name Ugrayudha proposed to marry Satyavati, the widow of Shantanu. But Bhishma refused to accept that alliance, and that is another story. Meanwhile, Ulupi’s marriage with Arjuna throws light on the fact that a widow was eligible to marry at her will in those times.

Ulupi, a Naga Kanya, was the daughter of Airavatha Kauravya, a Naga chief. She was a widow and childless. Ulupi’s husband was killed by Garuda long ago. Hence, she lived with her father. She was young and beautiful. Her life stagnated, and she saw no hope for herself. Nagas live in the wild, and are very independent, divided in groups headed by Vasuki, Takshaka, Kauravya and others.

Kauravya’s Nagalok existed under the waters of Bhagirathi river. Ulupi used to come out of her domain once in a while, to visit the temple of Mahadev that existed on the banks of the river. She and her friends would roam there for some time rejuvenating themselves with the flavour of earth, and return to their loka. On one such occasion, her friends happened to see the third Pandav Arjuna, who temporarily established himself on the banks of the Ganga in an ashram.

They were very much elated on seeing the famous Pandava prince there, in the attire of a celibate. What must be the reason for his stay, that too as an ascetic, they wondered. He had a large group of followers, mostly Brahmins who accompanied him from Indraprasth. Within a short while they collected information regarding the reason behind his pilgrimage.

Ulupi did not believe her friends. How could Prince Arjun become an ascetic at such a young age? That too, for twelve long years? Why did his brothers allow him to get out of Indraprasth for such a simple reason of violating a vow? He had entered the private space where his Eldest brother was with Draupadi, only to take his weapons. That too to help a Brahmin whose cows were stolen by thieves!

Ulupi’s friends persuaded her to go and have the good fortune of savouring the beauty of Arjun, who was extremely handsome. ‘Life will be fruitful just by looking at him, when he takes a bath in the river.’ They said. Ulupi could not restrain herself. She wanted to find out for herself if what they said was true indeed.

It was sunset time. Arjun took his bath in Bhagirathi, as was his habit, and closed his eyes meditating on Sankarashiv. Ulupi could not help staring at him. She was standing on his left side but was not seen due to her power of illusion that could make her invisible. And she was totally mesmerised on seeing Arjun who was handsome beyond her imagination. He was dark in complexion with his curly hair tied above his head in such a way that matched his ascetic form.

His beautiful face was so endearing, thought Ulupi. She was smitten by his good physique that must have been the result of his strenuous yoga practice. His mighty shoulders had bow marks, indicating the identity of him as the archer par excellence.

Ulupi could not stand still in the water. She was totally enamored by him, while Arjun did not have the slightest inkling about her presence near him. The water flow suddenly rushed from where Arjun stood and drenched Ulupi making her shiver with her desire. She knew she was a widow but how could that stop her from loving the most desirable warrior of Aryavarth? Ulupi thought that it would be better if she took her life if she failed in getting him as her husband! Life would be worth living if she could spend at least one night with him!

Arjun finished his prayer and turned to move towards the shore. He could not proceed, he felt drowsy. Ulupi used her illusional power and managed to take him to Nagalok, which was under water. After a while Arjun got up to find himself settled on a couch, in a different land that was unknown to him. He got up instantly. He remembered himself finishing his bath and that he was about to return to his ashram to complete his evening ritual.

Arjun looked around and found a beautiful girl standing in a corner, looking at him bashfully, ardently. He understood that look. He then walked towards the fire pit, and closed his eyes in meditation. He chanted his evening prayers.

Ulupi stared at him in disbelief. He was unperturbed and composed, knowing fully well that he was in an unknown place. When Arjun asked her the reason for her outlandish behaviour, Ulupi honestly admitted her intention in abducting him by illusion.

Ulupi mustered her courage to admit her fascination for him that landed her in desperation resulting in his abduction. “As soon as I saw you in the river, I lost myself to you, who should forgive my offence. I have no other alternative that could help me win your grace.” Ulupi paused and continued. “I hope you will understand my situation,” she completed with some effort.

Arjun remained silent, looking absorbed in his own world. He was serving his punishment period for breaking the rule. He had entered the place where his Eldest was with Draupadi. For this breach of vow, and thus an unpardonable offence, he had to live away from Indraprasth for 12 years. Ulupi understood his dilemma. She was not ready to forego the opportunity to possess him at least for one night. She was intelligent enough to find out a solution for her problem, rather his problem. Ulupi’s two lines convinced Parth to accept her wish.

Ulupi did not hide her widow status, she told Arjuna honestly that she had lost her husband long back. Arjun submitted himself to her willingly since he felt that saving the life of Ulupi was his immediate dharma. He did not deliberate even slightly on Ulupi’s widow status.

Thus was born Iravan. He was brought up with love and care by Ulupi who did not follow Arjun to Indraprasth. She stayed back in Nagalok and he proceeded to complete his pilgrimage. Pandavas lost their kingdom and lived in the forest. Arjuna went to heaven for Divyastras. But Iravan could not resist himself from meeting his father, the illustrious Arjun, the warrior who had received the Pashupatastra by then. He went to heaven to meet his father.

Arjun received him with love and ordered him to take part in the forthcoming war. Ulupi did not restrict her only son from joining the war. Iravan died on the eighth day of the Kurukshetra war, fighting bravely with demon Alambusha.

The great battle at Kurukshetra came to an end. Pandavas won back their kingdom and established themselves at Hastinapur. Bhishma was on the arrow bed, waiting for Uttarayan to leave his body. He was the eighth Vasu, and took birth as Ganga’s eighth son due to the curse of Vasishtha. On the tenth day of the war, Bhishma was struck down by Partha who protected Shikhandi and helped him fulfil his mission.

It happened with Bhishma’s consent. Still the other Vasus and Gangamata were furious with Arjun and cursed him that he would die at the hands of his son. It was Ulupi who was instrumental in getting Arjun redemption from the curse of Vasus. She along with her father, pleaded with them and finally got their grace. Vasus told her that Arjun had to fall at the hands of his son.

Which son of Arjun remained alive after the war? Abhimanyu, Iravan And Srutakarma had all died, but Babhruvahan, son of Chitrangada, another wife of Arjuna was alive. So Arjuana had to die at the hands of Babhruvahana. Yudhishtir performed the Aswamedha sacrifice. Arjun went with the horse to win over the earth yet again.

When Arjun reached Manipur, Babhruvahan met him with great respect but Arjun was not impressed. He expected his son to fight with him and prove himself. Ulupi made Babhruvahan fight with his father and let the curse happen. Arjun fell down, hurt by Babhruvahan’s arrow. Ulupi then revived Arjun with the ancestral gem from Nagalok and redeemed him from the curse of Vasus!

That was the extent of Ulupi’s love for Arjun. She loved him in word and deed. Ulupi never tried to intrude in Arjun’s life. She stayed away from him, nourishing her son. Finally, after the Aswamedha sacrifice, she got to enjoy her status as his wife, living with him in Hastinapur, She stayed with Arjuna till he left for Mahaprasthan. Then she went back to Nagalok.

Arjun on his part treated her with due love and respect. Once the Pandava empire got established after the completion of Aswamedha, Arjun brought all his wives to live with him in comfort.

Ulupi should be celebrated for her boldness in carving out a happier future for herself despite being a young, sad, and lonely widow, and of course for her undaunted love for Arjun.