Krishna and Arjuna’s Journey to Kailash 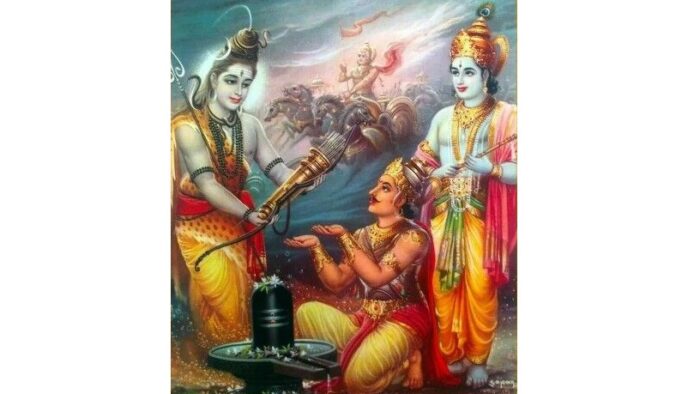 Arjuna acquired the Pashupata by performing severe penance during the exile period of the Pandavas. Mahadev blessed him with Maha Pashupatastra that was the most powerful weapon, not owned by anyone else other than Shiva and Shakti.

In the midst of Kurukshetra war, the Epic narrates another instance wherein Arjuna got Maha Pashupata from Shiva for a second time.

Why did Arjuna get it for the second time? Did he really forget the Maha Mantra, the most exquisite weapon he received from Mahadev?

Why did Krishna and Arjuna undertake a journey to Kailash? Was it a dream or reality?

These are the questions related to the acquisition of Pashupatashtra by Arjuna for the second time, the answers to which we find in the Epic itself.

Let us take a look into the facts that resulted in the Journey to Kailash by Krishna and Arjuna.

Thirteenth night of Kurukshetra war was quite significant for many reasons.

It was the night of mourning in the Pandava camp.  The young son of Arjuna, the brave Abhimanyu met his tragic end in the battlefield.  Drona arranged Chakravyuha in the absence of Arjuna, who was deliberately taken far away to the southern part of battleground. Abhimanyu, the heroic son of Arjuna bravely entered the Chakravyuha and created havoc for the Kauravas. After a spectacular display of his amazing warrior skills, Abhimanyu died, fighting Dussasana’s son.

Arjuna could not bear the loss of his beloved son who was denied assistance of his side because of Jayadratha.

Jayadratha prevented four Pandavas and their army from reaching out to Abhimanyu because of the boon he got from Sadashiv. It was the day he waited a long time, to take revenge on Pandavas and he did. As per Shiva’s boon, he could defeat all the Pandavas except Arjuna for one day.

Upon hearing about Abhimanyu’s death, the grief stricken father, Arjuna vowed to kill Jayadratha by sunset the next day failing which he would enter the fire along with his Gandiva.

The night brought Arjuna more misery and sorrow as he blamed himself for not being able to save his son that day. After concluding his night worship of Mahadev and Krishna, he retired to sleep thinking about the accomplishment of his vow and the hurdles he has to face in this path.

In his dream Arjuna saw Krishna approach him. He then admitted his anguish regarding the vow taken by him and its accomplishment in the face of tough opposition from Drona and the Kuru army.

Krishna then consoled Arjuna saying that he could fulfill his vow if he could recite the Pashupata mantra from his memory. He asked Arjun to pray to the Three-Eyed Lord who once granted Pashupata to him.

Hearing these words of Krishna, Dhananjaya, having touched water, sat on the earth with full concentration meditating on Sadashiv.  He did not admit that he forgot the Pashupata mantra. He just concentrated on what he learnt from Shiva, on the peaks of the snowy mountains.

Journey to Kailash in dream

Arjuna then saw himself journeying through the sky with Krishna by his side. Krishna took his left arm and guided him through northern direction with the speed of mind. Arjuna witnessed Manimat Mountain, the abode of gems, Sweta Parvat and the beautiful lotus gardens of Kubera.

Arjuna was amazed on seeing the abode of Kinnaras filled with illumined herbs. Thereupon he reached Ganga River flowing besides Mandara Mountain where the ascetics set up their hermitages, followed by the Satasringa Mountain and Saryati Forest.

Finally with Krishna as his companion Arjuna reached the Mountain Vishnu Pada.

Partha finally beheld the Kailasa Mountain and there he saw Sadashiv with Trident in hand and Devi Uma by his side surrounded by the Pramathas dancing and shouting in joy.

Krishna and Partha descended down on Kailash and bowed before the Three-Eyed Lord.

Arjuna beheld the offerings he made every night to Vasudeva lying by the side of the Three-eyed deity. He then solicited the Mahapashupata from the God of Gods with folded hands.

Shiva smiled at them and directed them to the lake of nectar where a celestial bow and arrows had been kept.

Krishna and Arjuna reached the lake and saw a monstrous-looking thousand headed snake breathing out fire.  Subsequently Krishna and Partha having touched water, joined their hands in prayer and approached the snake.

They uttered the hundred stanzas of the Veda, to the praise of Rudra, bowing the while with their sincere souls unto Bhava of immeasurable power.

Then those two terrible snakes, abandoned their snake-forms and assumed the forms of a bow and arrow.  Krishna and Arjuna then seized that bow and arrow of great effulgence and brought them to Mahadev.

Sadashiv let His replica, a brahmachari who came out of his body, demonstrate the mantra and the method to shoot it by using that special bow.

By fixing the arrow on the bowstring, the brahmachari began to stretch it.  Beholding the manner of his seizing the handle of the bow and drawing the string and placing of his feet, and hearing also the Mantras uttered by Bhava, Arjuna learnt everything duly.

Shiva finally blessed Arjuna that he will fulfill his vow of killing Jayadratha.

Why did Arjun see such a dream?

The purpose of the dream was to let Arjuna recollect the Pashupata mantra through the Adidhanurdhar himself.

When Arjuna was in trauma Krishna and Shiva both helped him regain his mental strength.

Krishna took him by hand (in dream) and placed him before Shiva, who showered his grace on Parth yet again.

The demonstration of Pashupata was awe inspiring.

In the morning when Arjuna met his eldest brother, he narrated what he had seen the previous night.

Arjuna did not say that he went there. He said,he had seen (the journey to Kailash.).

Hence it was a dream.that Arjuna got on thirteenth night.

Vyasa himself validated this fact on fifteenth day when he told Arjuna that Shiva was walking before his chariot, destroying his rivals even before his arrows reach them. Vyasa revealed that it was the Three-Eyed Lord whom Krishna showed in his dream.

Arjuna did not forget the mantra.

Those who get such powerful astras by sheer hard work and penance would never dare to forget the fruit of their endeavour. They will store it in their mind to be used when in need.

Be it Drona, Bhishma or Karna they do exactly the same.

When Arjuna was about to fight Virat war, all the astradevatas or astras in embodied form stood before him, and Arjuna asked them to stay in his memory. Does that mean he did not have them in his memory already? No. It was a mark of respect shown towards astradevatas.

He recalled them and they were present.

Similarly he recollected the mantra and Shiva himself appeared in his dream and again graced him the Mahapashupata mantra.

Vedavyasa in this instance, particularly called him Smritiman or the.one who posessed great memory.

Then Arjuna of good memory knowing that Bhava was gratified with him, and remembering also the boon the latter had given him in the forest, and the sight also he gave him of his person, mentally entertained the desire, ‘Let all this become productive of fruit!’ Understanding this to be his wish, Bhava, gratified with him, gave him the boon.

Hence the Journey to Kailash and acquisition of Mahapashupata was meant for the divine purpose of making Arjuna fight with confidence and competence on fourteenth day. Till then Arjuna did not really invest his full power in battlefield and unleash his superior skills. Abhimanyu’s death shattered him and enraged him beyond the limit.

Krishna took Arjuna to Sadashiv to let him relearn the mantra and be blessed by the bearer of Pinaka who always advanced before his chariot.

By all means Journey to Kailash was essential to boost up the spirit of Arjuna to meet the biggest challenge ahead. Who knows it better than Krishna?