Madri Of Mahabharata: The Forgotten Mother Of The Twins 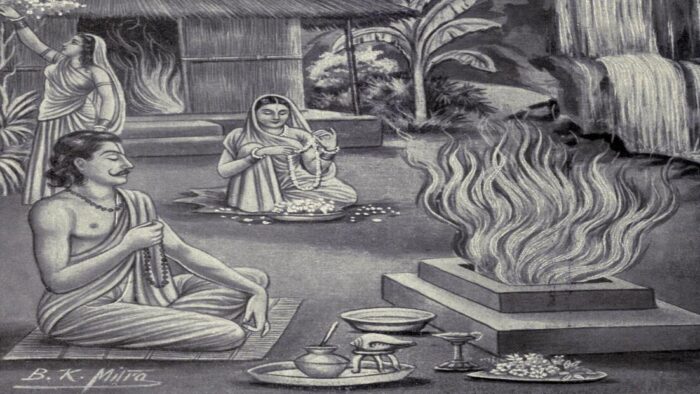 Mahabharata the Epic had many characters with less page space but more significance in terms of impact and story progression. Madri, the second wife of Pandu was one such character that had a very brief role in the narrative compared to her co-wife Kunti.

The beauty of Mahabharata lies in the fact that lesser-known characters also contribute significantly in moving the story ahead.

Madri was more remembered as the beloved wife of Pandu than the mother of the Pandava twins Nakula and Sahadeva.

Madri, the sister of Shalya was introduced by Vyasa with the epithet rupenaasadrishi, famous for her unparalleled beauty.

Kunti chose Pandu in Swayamvar, and with her by his side, he shone like Indra with Sachi.

Madri was brought by Bhishma for Pandu and she was famous on earth for her beauty.

Bhishma personally went to Madra kingdom and requested Shalya for Madri’s hand to be given in marriage to Pandu. He followed the custom of Madra kingdom by offering many valuable gifts for the sake of this alliance.

Bhishma of great energy gave Shalya much gold, both coined and uncoined, and precious stones of various colours by thousands, and elephants and horses and cars, and much cloth and many ornaments, and gems and pearls and corals.

Shalya accepting with a cheerful heart those precious gifts then gave away his sister decked in ornaments unto that bull of the Kuru race. Then the wise Bhishma, the son of the oceangoing Ganga, rejoiced at the issue of his mission, took Madri with him, and returned to the Kuru capital named after the elephant. (1.113)

Subsequently selecting an auspicious day and moment as indicated by the wise for the ceremony, King Pandu was duly united with Madri.

Later when Pandu decided to abandon his throne and live in the forest, both his wives accompanied him and served him with devotion.

Madri‘s nature and her equation with her co-wife Kunti can be understood by means of the conversation that happened between her and king Pandu after the birth of Kunti’s sons.

So how was the rapport between the wives of Pandu? Epic throws light on Madri’s prejudice for Kunti, particularly in this instance.

It was celebration time for Pandu who got three sons by Kunti due to divine grace. Yudhishtira, Bhima, and Arjuna were born from Dharma, Vayu, and Indra with the power of the mantra that Kunti utilized on the order and consent of her husband Pandu.

Kunti was obedient and submitted herself to Pandu’s ardent desire of becoming a father. Pandu who was cursed by Kindama Rishi had no other option but to let Kunti follow Niyoga to get sons for him. Even the choice of Gods was made by Pandu with great foresight and wisdom. Niyoga bore fruits and Pandu’s wish was fulfilled. His three sons born to Pritha were the epitome of Dharma, Bala and Shaurya.

Madri was the one left without any hope of becoming a mother by herself and she could not bear the pain of living a childless life forever.

Madri knew it was Kunti who enabled the birth of children with the power of her mantra but she did not approach her. Instead she poured her heart out before her loving husband Pandu and achieved her purpose.

Madri’s words before Pandu, clearly mirrors her envy and disdain for Kunti.

Madri lamented that despite being equal to Kunti in every way, she has to remain childless.

Vaisampayana said, “After the birth of Kunti’s sons and also of the hundred sons of Dhritarashtra, the daughter of the king of the Madra privately addressed Pandu, saying, ‘O slayer of foes, I have no complaint even if thou best unpropitious to me. I have, O sinless one, also no complaint that though by birth I am superior to Kunti yet I am inferior to her in station.

I do not grieve, O thou of Kuru’s race that Gandhari hath obtained a hundred sons. This, however, is my great grief that while Kunti and I are equal, I should be childless, while it should so chance that thou shouldst have offspring by Kunti alone.

If the daughter of Kuntibhoja should so provide that I should have offspring, she would then be really doing me a great favor and benefiting thee likewise. She being my rival, I feel a delicacy in soliciting any favor of her. If thou best, O king, propitiously disposed to me, then ask her to grant my desire.’” (1.129)

Madri did not mince words and called Kunti.her rival.

She said she was superior to Kunti by birth, probably due to the latter being a Yadava princess and an adopted daughter of Kunti Bhoja.

Madri said that she and Kunti are equals (by being Pandu’s wives) but still she has to remain childless.

Madri was clever enough to hint the benefit for Pandu if she also gets blessed with children. His children will grow in number to spread Pandava glory.

Madri did not hesitate to tell Pandu about her delicacy in soliciting favor from Kunti.

Pandu willingly became the mediator to fulfill the wish of his beloved wife. He already asked Kunti to get more sons but Kunti rejected the idea and said,

Hence Pandu was more than delighted to get more children by making Madri blessed with sons through Kunti’s grace.

By obliging with Pandu’s request on behalf of Madri, Kunti proved herself to be noble and large-hearted. She was magnanimous and compassionate. She understood her co wife’s pain and also her inhibition to personally approach her for favour.

But when Madri got twins by Aswins and again Pandu wished more children for Madri, Kunti felt cheated. She openly told Pandu about her feelings and refused to oblige.

Sometime later, Pandu again requested Kunti on behalf of Madri. Addressing her lord in private, Kunti replied, ‘Having given her the formula of invocation only once, she hath, O king, managed to obtain two sons. Have I not been thus deceived by her, I fear, O king, that she will soon surpass me in the number of her children. This, indeed, is the way of all wicked women.

Fool that I was, I did not know that by invoking the twin gods I could obtain at one birth twin children. I beseech thee, O king, do not command me any further. Let this be the boon granted (by thee) to me.'(1.129)

Kunti called Madri wicked and deceitful. She sensed that given a chance Madri would surpass her by getting more number of sons.

Madri got twins in one chance by Aswins and revelled in her newly attained motherhood.

The beloved wife followed him in death also.

Pandu was cursed by Kindama Rishi and danger was looming large over him, waiting to strike at any moment.

The death of Pandu happened on Arjun’s birthday, according to Southern version.

Kunti who was more alert and watchful between the two, forgot to check Pandu who was roaming in the forest that blossomed with flowers in spring season. It was the day of Uttara Phalguni constellation that happened to be the birthday of Arjun.

Kunti was serving food to Brahmins who were invited to extend blessings to Arjun on his birthday. Madri was with Pandu and he could not resist his desire, stuck by temptation and ill fate.The inevitable mishap happened.Pandu died on the spot, leaving lifelong sorrow for his wives and children.

Kunti regretted not being with Pandu during his last moments. She immediately decided to follow him to the other world.

Kunti wanted to follow Pandu but Madri did not allow her to do so. Madri knew that she was not that magnanimous and noble like Kunti who possessed motherly love for her children also.

Madri finally admitted before her co wife Kunti, how noble she is and how narrow minded she herself is. By saying thus she redeemed herself.

If I survive thee, it is certain I shall not be able to rear thy children as if they were mine. Will not sin touch me on that account? But, thou, O Kunti, shall be able to bring up my sons as if they were thine. The king, in seeking me wishfully, hath gone to the region of spirits; therefore, my body should be burnt with his.

O revered sister, withhold not thy sanction to this which is agreeable to me. Thou wilt certainly bring up the children carefully. That indeed would be very agreeable to me. I have no other direction to give!’ (1.125)

“Vaisampayana continued, ‘Having said this, the daughter of the king of Madra, the wedded wife of Pandu, ascended the funeral pyre of her lord, that bull among men.'”

Madri could finally realise why Kunti is superior to her in every aspect. She understood the large hearted nature of Kunti and chose to leave her twins under her care while she followed Pandu to eternity. She knew she won’t be able to treat Kunti’s sons without partiality. She honestly admitted the fact before Kunti and entrusted her sons to her wholeheartedly.

Surely after the birth of the five sons of Pandu, it was Kunti who took care of them and nourished them with equal affection. Madri thus got enlightened and accepted Kunti‘s motherhood as much superior to hers. She allowed the world to treat Kunti as the mother of five and not of three.

Kunti did not disappoint Madri at all. She loved Nakula and Sahadeva more than her own children and showered her motherly affection more on them than on her own sons, especially on Sahadeva.
That was why the twins never missed their own mother Madri at all.

Madri was less remembered as the mother of twins but more acknowledged as the beloved wife of Pandu. She took time to realise how generous and noble her Elder co wife Kunti was. After knowing the fact, she relinquished her motherly status to Kunti and followed her loving husband in his last journey. She stands out in her own way, as the beautiful Madra princess loved passionately by King Pandu till his last breath.