The Glory of Mahadev in Mahabharat 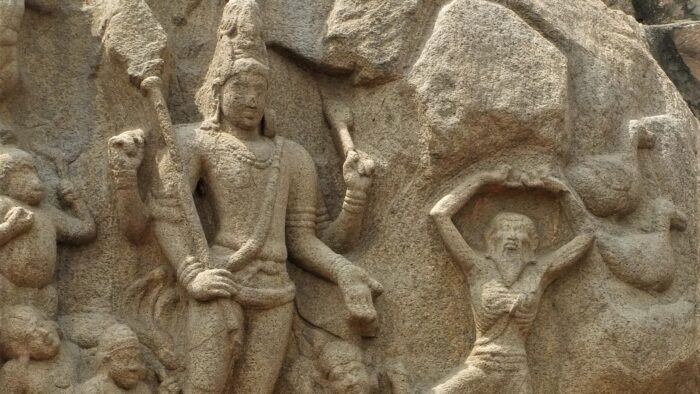 The Epic Mahabharata sings the glory of Narayan who incarnated as Krishna Vaasudeva to establish Dharma, protect the noble and punish the evil.

Krishna was the path-finder for Arjun and his brothers in their fight for justice with equanimity in order to establish a new world order wherein the society can fearlessly follow the path of dharma by will and by action. He was the Gitacharya who handed over the nectar of Gita not only to Arjun but to everyone who gets lost in inaction and depression.

The divine plan actually was designed for unburdening Mother Earth who could not bear the weight of the asuras born in different forms. Goddess of Earth, oppressed by their weight and afflicted with fear, sought the protection of the Creator who ordered all the celestials to take birth and become a part of the divine plan.

Krishna, the Vishnu incarnate spearheaded the attack on adharma and adharmis by killing many asuras like Kamsa, Sishupala and the like. He drove the chariot of Arjun, the third Pandav and dictated the outcome of Kurukshetra war. Finally, evil was rooted out and dharma was established on earth.

While we see direct participation of Narayan in this divine plan, we also witness the presence of Mahashiv throughout the proceedings that culminated in destroying adharma from the root level.

Shiva was instrumental in Draupadi’s marriage to Pandavas:

Veda Vyasa narrates to Drupada, the previous birth story of Draupadi who got the boon of marrying five Indras from Sadashiv himself. He then tells the story of Nalayani being graced by Shiva to get five husbands in her next birth. Both are significant to make Drupada understand the significance of this unusual alliance that would enable the divine plan to gain momentum and reach the battlefield of Kurukshetra.

It was Shiv who directed the polyandrous marriage from behind the scene since it is crucial for keeping the Pandava united which would be used to fight the Kālī ansh Duryodhan and his followers.

Vyasa’s revelation convinces Drupada to approve of the polyandrous marriage of Draupadi to Pandavas that certainly turned out to instrumental in Pandavas getting their parental share of the kingdom from Dhritarashtra.

Amba was born as Sikhandi by Shiva’s grace:

Amba, the Kashi princess was abducted by Bhishma from the Swayamvar mandap. Bhishma let her go to Salwa who was chosen by her but she was outrightly rejected by him. Amba then caused the war between Parashurama and Bhishma that ended in truce.

Amba who was desperate to seek revenge on Bhishma did penance and worshipped Sadashiv who blessed her with fulfilment of her wish in her next birth.

There was another angle to this that involves Drupada in this revenge story. Drupada wanted a son to kill Bhishma who scared him with his might and power. He did austerities and pleased Shiva.

This incident happened much before Drupada’s humiliation of Drona and his Yajna to get Drishtadyumna and Draupadi.

Bhishma narrated this story to Duryodhan in Udyoga Parva (5.191).

Drupada requested Sadashiv for a son but Shiva said that he will have a child who is male and female. Shiva told him that it is the destiny which should take its own course.

Here we see Shiva connect the destiny of Amba with Drupada while setting the stage for Bhishma’s fall in Kurukshetra war through Sikhandi’s presence.

Shiva blesses Drupada for the success of the Swayamvara.

Drupada strongly desired Arjun to be his son-in-law by taking the hand of Draupadi. He went by Upasruti heard by his preceptor that Pandavas were alive despite the attempt to burn them in Lakshagrih.

Drupada created a difficult target which was to be  hit with the bow named Kindhura that was given to his ancestor Srinjaya Vaiyaghra pada by the Gods.

Drupada prayed to Sadashiv for the success of the Swayamvara by making Arjuna arrive on time and hit the target. He believed that Shiva’s grace will make the Swayamvara a success.

Kiratarjuniya was the heart of Vana Parva. This story became the main theme for one of the five Mahakavyas of Sanskrit literature, Kiratarjuniyam by Bharavi.

Indra did not allow his son to reach the heaven and get the astras till he got Pashupatastra from Mahadev. Adi Dhanurdhar Shiva was the one who has to permit Arjun to get access to the immensely powerful astras of all the Gods. Indra made it clear to Arjun.

Shiva tested Arjun’s campetence, caliber and worth before offering him the most powerful Astra. Then he gave his approval for Arjun to reach heaven and learn astras.

With Shiva’s grace only Arjun was able to accumulate all the astras.

Shiva’s boon to Jayadrath changed the course of Kurukshetra battle.

Jayadrath wanted to take revenge on Pandavas for his humiliation when he abducted Draupadi. He did severe penance and gratified Mahadev.

Shiva offered him the boon but with exception. Jayadrath could win four Pandavas except Arjun only for one day. And that day happened to be the thirteenth day of Kurukshetra war. Abhimanyu entered the Chakravyuha in Arjun’s absence and thrashed Kaurava army with their maharadhis. Jayadrath utilised his boon and stopped the four Pandavas from entering the vyuha. Abhimanyu could not get any assistance from their side and died after a spectacular exhibition of his amazing skills.

Arjun’s vow to kill Jayadrath by next day sunset resulted in disaster for Kauravas. First time since the war started, Arjun fought with rage and wiped out seven akshouhinis army along with Jayadrath.

Shiva’s boon to Jayadrath resulted in indicating the winning side of the war.

The Journey to Kailash:

On the night of Abhimanyu’s death, Arjun who was highly agitated on account of the slaughter of his son, gets the dream of a journey to Kailash and acquisition of Pashupata for a second time from Mahadev himself.

Krishna told Arjun to pray to the three-eyed Lord to possess the mantra again, if he could not recollect it then.

Arjun sat on the earth, concentrating his mind on Shiv. It was Brahmi muhurat. All this happened in dream. He was saluting in mind to Bhava, for the perfect knowledge of Pashupat mantra which he already had and would be gratified if he possessed the grace of Lord yet again.

Then he witnessed his journey to Himalayas along with his soulmate Krishna.

In his dream he witnessed Sadashiv and Shakti on Kailasa.

At his behest, Sadashiv let His replica, a brahmachari who came out of his body demonstrate the mantra and the method to shoot the Pashupata by using a special bow.

Arjun was blessed with the mantra method and accomplishment of his vow by the three-eyed lord yet again.

Arjun fulfilled his vow of killing Jayadratha with Shiva’s blessing.

On the 17th day when Karna and Arjun are about to face each other, all the Gods assembled in the sky to witness this great encounter. Sadashiv and Brahma also arrived to watch the most crucial duel of Kurukshetra war.

Both Indra and Surya wished success for their sons and requested Shiva and Brahma to grace them.

Then both the Gods declared Partha, the winner-to-be since his win accomplishes the purpose of Gods. They also stated that Nar and Narayan are invincible to anyone in the universe.

Thus Shiva blessed Arjun with victory over Karna that finally paved way for Pandavas’ triumph over the Kauravas.

The most terrible incident that happened by midnight at the end of the war got the approval of Sadashiv, the Maharudra. Aswathama entered the Pandava Shibir at midnight and killed the five sons of Pandavas, Drishtdyumna, Sikhandi, Yudhamanyu, Uttamaujas and other survivors of the great battle. He offered himself to Rudra for fulfilment of his purpose and the three-eyed Lord permitted him to slaughter his rivals.

Then the divine Mahadeva entered Ashvatthama’s body after giving him an excellent and polished sword. Filled by that divine being, Drona’s son blazed up with energy. In consequence of that energy derived from godhead, he became all-powerful in battle. Many invisible beings and rakshasas proceeded along his right and his left as he set out, like the Lord Mahadeva himself, for entering the camp of his foes.(10.7)

Thus we see Shiva’s presence and involvement throughout the Kurukshetra war. In fact, Arjuna tells Vyasa that he sees

At the end of Drona Parva, Arjun asks Vyasa who is that One with Lance in hand, preceding his chariot, killing his rivals even before they are actually struck by his arrows.

Vyasa enlightens him revealing the great fact that he is Sankara, The First Cause, embodiment of heaven, earth and sky, the protector of the universe also called Ishana (7.202).

Shatarudriyam was narrated by Vyasa here, the names that explain the glory of Sadashiv.

Vyasa told Arjun that this hymn in praise of God of the Gods will bestow prosperity and victory to those who listen and chant the names approved by Veda. He reminded Arjun that in his dream, he saw the same God on Mount Kailash.

Some more incidents where Shiva graced his devotees:

Gandhari was a great Shiva devotee. She was blessed by Shiva to beget hundred sons.

Chitrangada (Arjun’s Wife) was the daughter of Chitravahana whose clan was blessed by Shiva to get one child, who could be the perpetrator of the race.

Upamanyu, the great Shiva devotee chants Shiva Sahasranama to Krishna and narrates the way he got Shiva’s darshan.

Krishna with Rukmini did penance to get a son by the grace of Shiva. He also got his other son, Samba by Jambavati with Shiva’s blessing.

Anusasana Parva got the conversation of Uma and Maheshwara on various topics.

Shiv and Keshav not different from each other

When Arjun got darshan of Shiva in Vana Parva, he sees the worship materials that he offered to Krishna every night on Shiva himself (3.39).

VedaVyasa enlightened us with the same truth in Harivamshaparva.

Shiva is in the form of Vishnu and Vishnu is in the form of Shiva. There is no difference between them and both provide Auspiciousness. Hence the Epic Mahabharata got Krishna as well as Shiva dictate the proceedings towards establishing dharma in Dwapar yug.