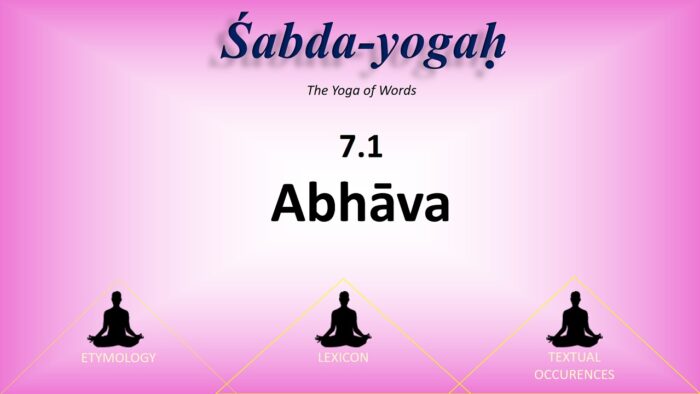 The words that appear in the Yogasūtras will be sequentially dealt initially and then terms from other prominent Yoga texts will be taken up. Every śabda-yoga unit will analyze five terms. Three compound terms are taken for analysis in this part viz – abhāvapratyayālambanā, anubhūtaviṣayāsampramoṣaḥ, abhyāsavairāgyābhyām. These three compound terms yield six unique words for analysis in this seventh unit. They are –

Two terms anubhūta and asampramoṣa from the above three compounds are not taken up for detailed elaboration as their occurrence is limited only to one occurrence. These two are briefly explained while analyzing the compounds.

This compound term occurs in the Sūtra that defines the state of Nidrā. This term is part of the 10th Sūtra of the first Pāda of Yogasūtras.

The compound term is in the form of an adjective to the word Vṛtti in the Sūtra.

The Compound is split as follows –

The cause of absence.

That (activity of the mind) to which the cause of absence is the support.

As evident from the above compound split, Nidrā is described as an activity of the mind which takes support of the cause of the absence (of waking and dream states) to manifest. The cause of absence is described as the Tamas by commentators of Yogasūtras.

From this compound three unique Yogic terms can be seen –

This is a compound term that describes Smṛti aCittavṛtti. This term is found as part of the 11th Sūtra of the first chapter of Yogasūtra.

Object experienced (through the senses)

As evident from the compound splitm, the act of remembering is described as non-forgetting the objects of past experiences.

From this compound the important Yogic term that emerges is Viṣaya. This is the fourth term (7.4) that will be discussed in detail as part of the seventh unit of śabda Yoga.

This compound term indicates the twin methods of abhyāsaand Vairāgya to attain the state of Citta-vṛtti-nirodha. This term is found as part of the Sūtra 12 in the first chapter of Yogasūtra.

The compound term is in the instrumental case dual number. It indicates that these two methods of abhyāsa and vairagya are instrumental in attainment of Citta-vṛtti-nirodha.

are important Yogic terminologies that emerge from this compound term. This will be explained as part of the seventh unit of Śabda Yoga. 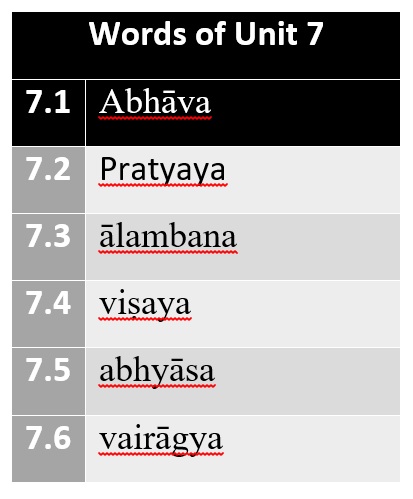 This is a compound term. The compound split has been shown earlier.

न  Na is an indeclinable

Lexicon – The term अभावis not found in the Lexicon.

The word Abhāva is found to be used four times in this text. The five occurrences are elucidated briefly below –

Summary: Sūtra1.10– This the first occurrence where as part of the definition of the Vṛtti – activity of the mind called sleep/nidrā we find the word Abhāva. Here Deep sleep is defined as that which has Tamas which is the cause of absence (of the waking and dream states) as its content. Sūtra1.29 ..- – The second reference in the context of explaining the outcomes of japa and meditation on the meaning of the Praṇava(oṅkāra). Realization of indwelling consciousness and abhāva- absence of obstacles in the path of Yoga are the outcomes. Sūtra2.25 states that by the absence of avidyā- wrong understanding about the nature of oneself – the conjunction of the draṣṭāand dṛśya ceases and Kaivalyam where the Purusha is free from the conjuction of the drshyam (the material world and its cause) is attained. It is to be understood that Vivekakhyāti – clarity that the draṣṭā (consciousness) is separate from the dṛśya (the matter) – is said to eradicate the wrong understanding. The Vivekakhyāti in turn, is attained by the practice of Aṣṭāṅgayoga etc. Sūtra4.11 .. – Here it has been clarified that the absence of (impact of)the Vāsanas can be attained. By achieving the absence of the factors of accumulation of Vāsanas – absence of Vāsanas can also be achieved. Hetu (cause- kleśa&karmas), phala (outcomes – Jāti, āyus&Bhoga), āśraya (the substratum – the mind) and ālambana (the support – the objects of the senses) are stated as the sources of accumulation of Vāsanas. (based on the commentary of SadāśivaBrahmendra’s commentary)

There is just one reference to this term is found in this text.

The lone reference from Bhagavadgītā clarifies that ātman – the self/consciousness is Sat- truly existing and hence it will never go into non-existence (abhāva).

Haṭhayogapradīpikā – There is no entry in this text

It is interesting to note the utilization of the word Abhāva is in various contexts involving the absolute and relative connotations.

In the absolute sense the Bhagavadgītā clarifies that there will no Abhāva/ absence of that which true/ really existent. Further in the removal of Avidyā and consequently attaining the absence of connection of the draṣṭāand dṛśya that leads to Kaivalya is also to be noted in this higher sense.

In the relative sense of the term we see that – in defining the state of deep sleep, overcoming obstacles of Yoga, rendering the Vāsanas ineffective the word Abhāva is used.

Thus it becomes useful to understand these various references to inform ourselves about the shades and contexts of utilization of the term – Abhāva.

Unit 7 To be Continued…