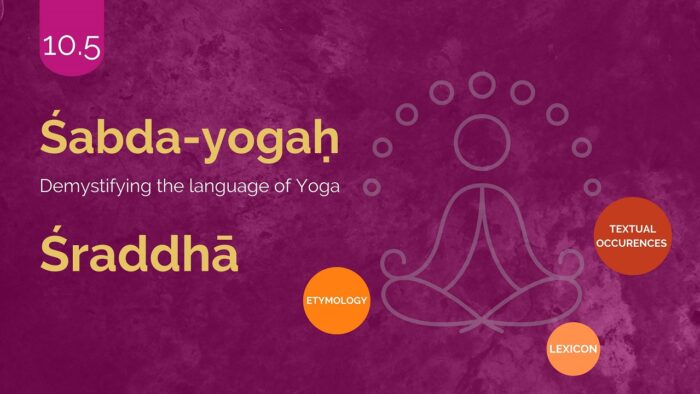 We will take up important Yogic terms from Sūtra s 1.17 – 20. The terms that will be analyzed in this Unit are – 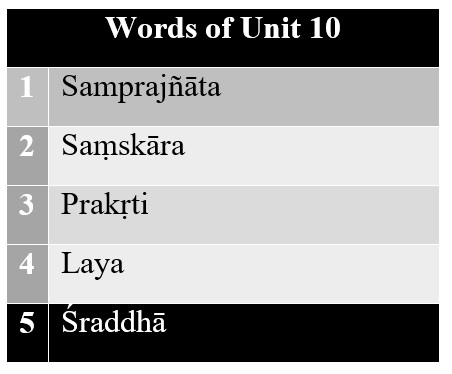 As evident from the derivation above

Both the prefix and the root are used together in the formation of the word – śraddhā together – that is conventionally used to mean intense faith.

As evident the etymology to the word śraddhā does not point to a derivative statement. The meaning – intense faith/desire/devotion – is more a conventionally adduced sense to the term.

There is just one reference to the word from the Amarakosha.

There is just one reference to the word in Yogasūtra. It is as follows

Śraddhā is presented as the chief among the upāyas/means to attain asaṃprajñātaSamādhi. Sage Vyāsa the primary commentator states –

Śraddhā refers to the intense desire in the mind. VācaspatiMiśra the primary sub-commentator clarifies that such an intense desire – is about the subject/concept that has been taught by the authoritative texts (Āgama) and clarified by the Ācāryas.

The object, obviously is the Puruṣa or the pure consciousness.

There is just one reference to the word śraddhā in this text.

This verse concludes the description of the practice of Sahajoli, one among the ten mudra-s elaborated in the third chapter of the text. The verse advises that Yogins should hold this practice with great devotion (Śraddhā).

It is important to note that the word Śraddhā finds mention in all the three Yoga texts consulted. Yogasūtra and Bhagavadgītā give great importance to Śraddhā whereas there is just a passing mention to the term in Haṭhayogapradīpikā.

1) Yogasūtras place primary importance to Śraddhā which is intense desire – about the object (the pure consciousness) described by the authoritative texts and the teachers. It is Śraddhā that facilitates progress in other practices of Yoga.

2) Śraddhā in the Gītā has the following important implications –

These are the significant insights that emerge from this discussion of Śabdayoga on the term Śraddhā.