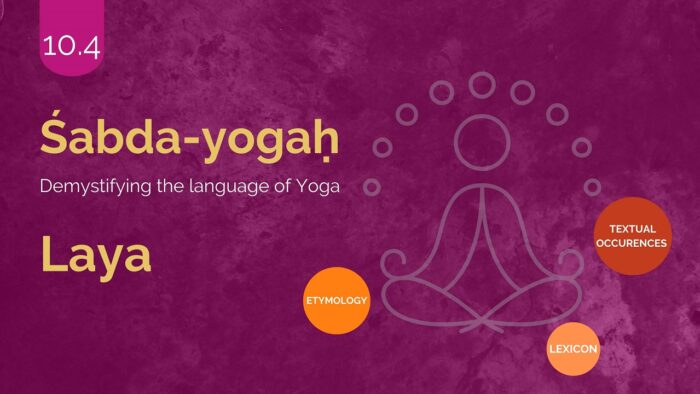 We will take up important Yogic terms from Sūtra s 1.17 – 20 The terms that will be analyzed in this Unit are – 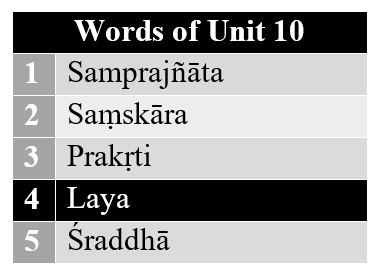 The derivate statement based on the above etymology would then be – लीयतेइतिलयः – līyateitilayaḥ – the act of getting absorbed.

No entry in the Lexicon

This Sūtra describes the state of AsaṃprajñātaSamādhi of those who consider the Prakṛti – the primordial material cause of the universe. They merge into such Prakṛti and stay in that subtle state of Prakṛti till the effect of that Samādhi remains and return back to the worldly state again. This kind of AsaṃprajñātaSamādhi is not recommended by the traditional teachers. The ultimate entity to be attained is Puruṣa or consciousness and that is to be meditated upon.

The three references with Pralaya respectively state that a) people endowed with the knowledge of the three Guṇas – are not born during the creating and the during pralaya (dissolution of the manifest world) they are afflicted. b & c) In this reference and the next – the outcome of passing away/death (pralaya) when the three Guṇas Sattva, Rajas and Tamas – are predominant in a person. On passing way when Sattva is dominant a person attains great pure, good higher realms in the subsequent birth. On passing way when Rajas is dominant – a person is born among those who are attached to restless actions. On passing way when Tamas is dominant – a person is born into those species that are bereft of clarity.

References from other Chapters

In verse 7.3 the lord states that I am the cause of manifestation and dissolution (Pralaya) for the entire creation. Verse 9.18 also echoes the same view as the previous reference Verse 16.11 describes people endowed with āsuric/demonic nature. Among other descriptions – they are stated as those being endowed with worry that ends with their demise/death (pralaya) – indicating that they are always worrying (about one thing or the other). (śrīmat-śāṅkarabhāṣyam for this verse reads –

References from chapters one and three:

Verse 1.43 glorifies that no other practice of Laya (complete absorption of the mind in the object of focus) is greater than the method of Nādānusandhāna.

Verse 3.75 – states that – by the practice of three Bandhas the Prāṇa/breath gets absorbed into the SuṣumnāNāḍī and becomes steady there. Laya of Prāṇa refers to stillness of Prāṇa that has entered into the Brahmarandhara (SuṣumnāNāḍī).   The Jyotsnā commentary in that regard is as follow –

As there are numerous references (14) the gist of the references are given herewith. The full verses are not given for fear of elongation of the article.

The following aspects of Laya can be noted from the three Yoga texts surveyed.

1) Yogasūtra uses the term Laya just for once to present the total absorption of the mind in the Prakṛti attained by reaching the state of AsaṃprajñātaSamādhi – meditating upon Prakṛti as the ultimate entity.

2) Bhagavadgītā does not use the word Laya as such. The usage Pralaya is found. Even in the text – Pralaya is seen in two meanings

The role of Paramātman, Prakṛti and Guṇas in the attainment of the Pralayas of these two types are discussed in detail in the references found in this text.

3) In the Haṭhayogapradīpikā the term Laya is used in an entirely technical sense. In this text – it points to the stillness of the mind and the breath.  The definition of Laya is found in this text. Laya is presented as the next step to Haṭha in the text.  The practices of Śāmbhavīmudrā, khecharimudrā and most importantly Nādānusandhāna are presented to reach the state of Laya. It has also been clarified that Laya itself is a means to reach the state of complete Citta-vṛtti-nirodha.

Thus this śabdayoga analysis brings out the various interesting shades of intra-text, inter-text meanings of the word Laya, which will not be otherwise evident.