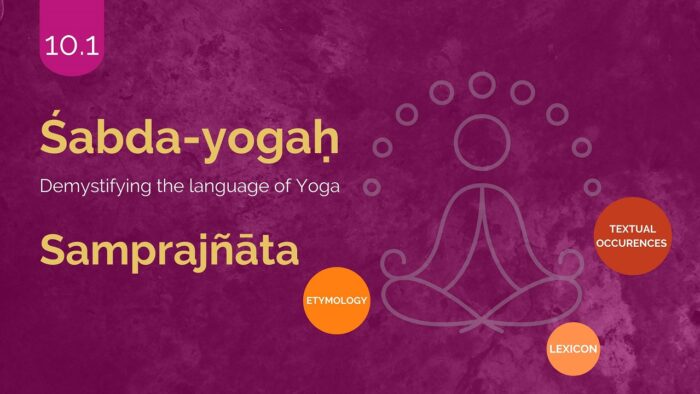 We will take up important Yogic terms from Sūtra-s 1.17 – 20 The terms that will be analyzed in this Unit are – 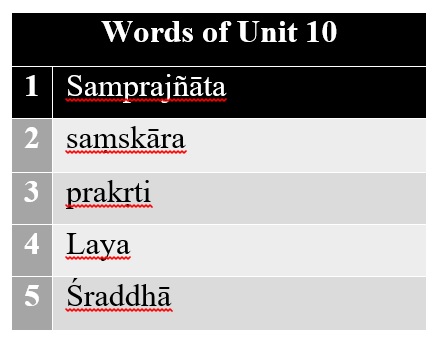 In the above etymology –

No entry in the Lexicon is found for this term.

This sūtra describes the state of saṃprajñātaSamādhi. The clear definition of the word saṃprajñāta is seen initially in the commentary of Bhoja, which is later utilized in later commentaries also. The definition is as follows – सम्यक्संशयविपर्ययरहितत्वेनप्रज्ञायतेप्रकर्षेणज्ञायतेभाव्यस्यस्वरूपंयेनससंप्रज्ञातःसमाधिर्भावनाविशेषः – samyaksaṃśayaviparyayarahitatvenaprajñāyateprakarṣeṇajñāyatebhāvyasyasvarūpaṃyenasasaṃprajñātaḥsamādhirbhāvanāviśeṣaḥ – that by which the clear, doubtless, error free knowledge of the object of meditation is known is called as saṃprajñāta –samādhi. It is a kind of visualization.

From the sequence of the Sūtra it could be seen that this state of Samādhi is attained by the twin practices of Abhyasa[4] and Vairagya[5]. As evident from the Sūtra – in general – saṃprajñāta is a state of citta, is attained by the acts of Vitarka, Vicāra, Ānanda and Āsmitā. The four Samādhi oriented acts of the cittaas described by Sage Vyāsa has be tabulated as follows – 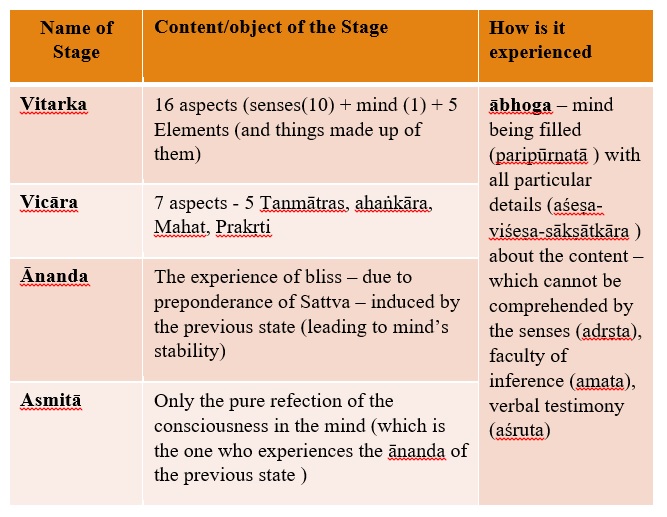 An additional insight on the understanding of the four Samādhi can also be found in the commentary of the Sage Vyāsa – which again has been expressed through the table 2 below. The commentary of Sage Vyāsa on this is as follows – तत्रप्रथमश्चतुष्टयानुगतःसमाधिःसवितर्कः।द्वितीयोवितर्कविकलःसविचारः।तृतीयोविचारविकलःसानन्दः।चतुर्थस्तद्विकलोऽस्मितामात्रइति।tatraprathamaścatuṣṭayānugataḥsamādhiḥsavitarkaḥ।dvitīyovitarkavikalaḥsavicāraḥ।tṛtīyovicāravikalaḥsānandaḥ।caturthastadvikalo’smitāmātraiti। 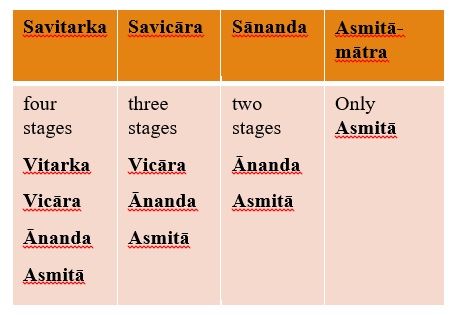 This is the four levels of the saṃprajñātaSamādhi. Attaining mastery in these states to the higher Samādhi called asaṃprajñāta which will be discussed in due course in Śabdayoga.

The term is not found in these texts.

Tabulation on Distribution of References in Yoga Texts 10.1

As evident from the discussion above the term saṃprajñāta is unique to Yogasūtras – not to be found in the other two texts. The inputs from the commentary also indicate that the four stages of the Samādhi are technical terms that have specific connotations with regard to the object of focus. They cannot be generally translated as deliberation, reflection, bliss and Ego. This clarity emerges by the analysis of the term in Śabdayoga.

[1] 37 meanings of the word ‘Sam’ with examples can be seen in Avyaya kosha here – https://archive.org/details/avyaya-kosa-srivatsankacharya/page/364/mode/2up?view=theater

[2] 8 meaning to the word ‘pra’ is given in the Avyayakosha with meanings can be seen here – https://archive.org/details/avyaya-kosa-srivatsankacharya/page/262/mode/2up?view=theater