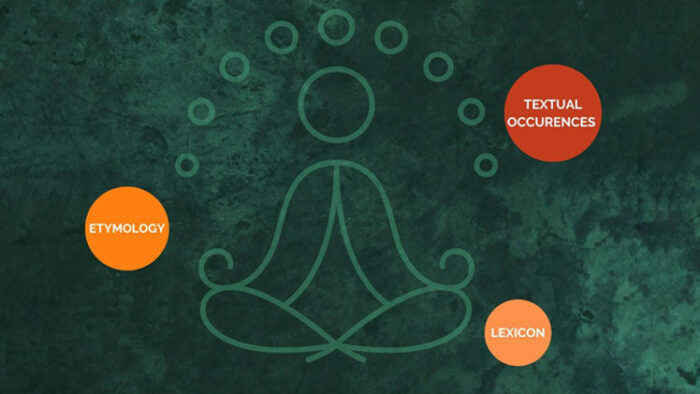 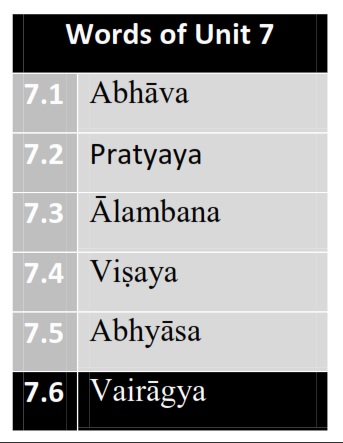 This is a derivative noun.

ṣyañ is the suffix that means भाव – the state – The suffix is added based on the grammatical rule गुणवचनब्राह्मणादिभ्यःकर्मणिचguṇavacanabrāhmaṇādibhyaḥkarmaṇica  (Ashtadhyayi 5.1.124)

Lexicon – There is no entry in the amarakosha

There are three occurrences of the term Vairāgya in Yogasūtras. They are as follows –

Sūtra 1.12 mentions that the twin methods of Abhyāsa and Vairāgya are essential towards achieving citta-vṛtti-nirodha. Sūtra 1.15 defines Vairāgya as detachment/dispassion from objects of pleasure perceived here and those that are promised in the scriptures. It is also indicated that such a dispassion should reach a very high level (vaśīkārasaṃjñā). It is to be noted that this sūtra mentions the aparavairāgya – the lower vairāgya. The higher vairāgya or the para vairāgya is described in Sūtra 1.16 which is detachment in the workings of the three Guṇas. Though the word Vairāgya is not used in the sūtra 1.16, it discusses the higher vairāgya that propels a practitioner to the highest state of Samādhi – NirbījaSamādhi.

Sūtra 3.50 states that by developing vairāgya from the outcomes of saṃyama (dhāraṇā-dhyāna-samādhi) mentioned in the previous sūtra (3.40) which is – ability to control all and ability to know everything – the seed of kleśas which are already in the state of burnt seeds, will get dissolved into their cause and the state of Kaivalya remains for the pure consciousness.

There are three references to the term Vairāgya in Bhagavadgītā. They are found in chapters 6, 13 and 18. They are as follows –

In the context of Dhyānayoga in verse 6.35 Abhyāsa and Vairāgya have been stated as the means to reduce the distractions of the mind &regulate it. In verse 13.8 Vairāgya on the objects of the senses is spoken as one among the qualities that are essential to attain the knowledge of kṣetrajña (the knower of the field/the consciousness). In verse 18.52 to attain the highest limit of knowledge (realization of the consciousness) among other practices Vairāgya is also enumerated.

Haṭhayogapradīpikā – The term Vairāgya is not found in this text.

The following can be noted from the above references –

2) The two levels of Vairāgya – Para and Apara are discussed in the Yogasūtras.

4) It is interesting to note that the terminology Vairāgya is not mentioned in Haṭhayogapradīpikā.